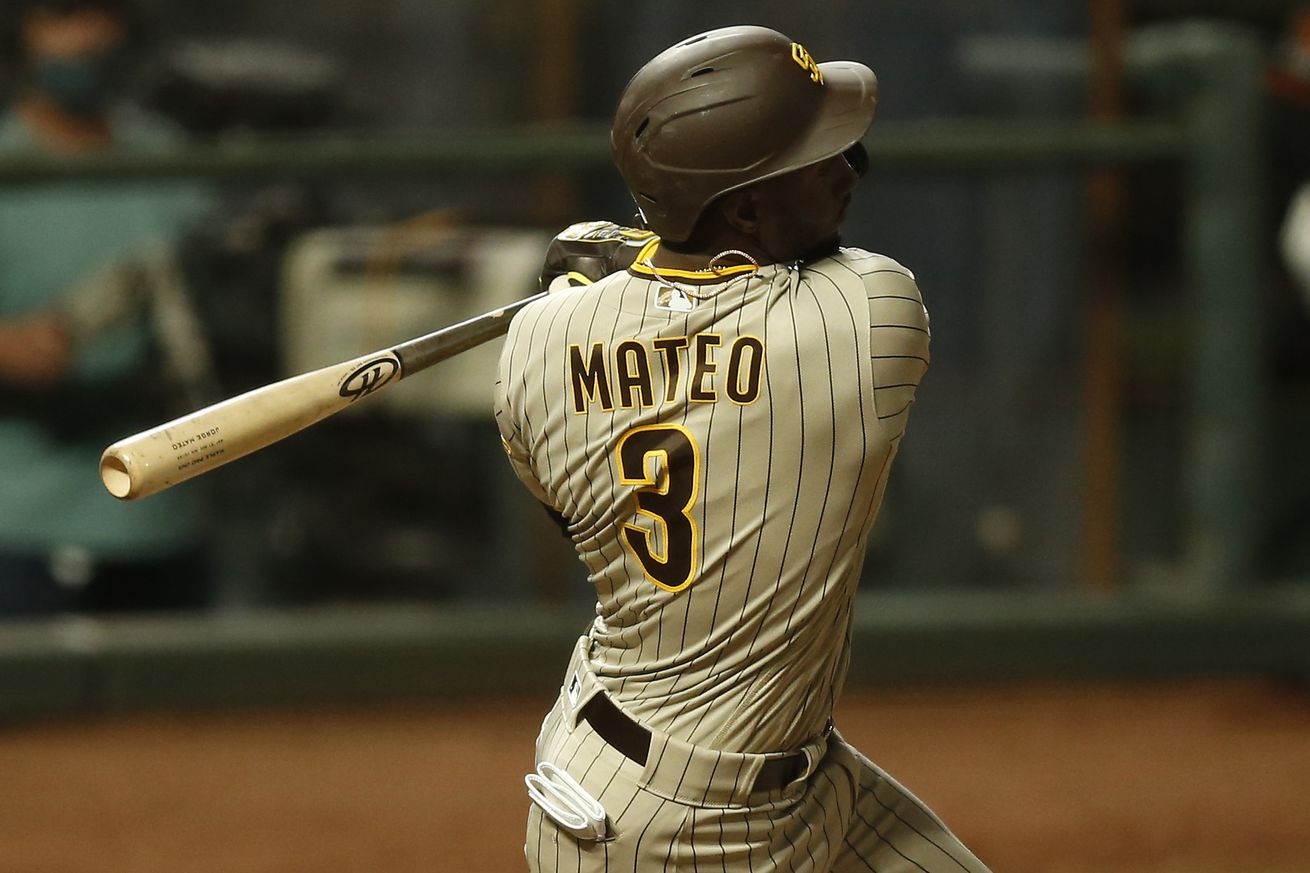 The A’s/Padres swap from June is now complete

Back in late June, the Oakland A’s traded speedy infield prospect Jorge Mateo to the San Diego Padres for a player to be named later. On Thursday, the A’s received their PTBNL to complete the swap, and it was revealed to be outfield prospect Junior Perez.

Big picture, Perez is a 19-year-old who signed out of the Dominican Republic in 2017, standing 6’1, 165 at present. He played in the Arizona Rookie League in 2019 and posted intriguing numbers (at age 17), but of course he was not part of San Diego’s player pool this summer or else he could have just been traded right away in June. (Stats below include 238 plate appearances.)

MLB Pipeline had Perez ranked as the Padres’ No. 16 prospect at the time of the deal. FanGraphs had him at No. 22 entering the year, but at least a half-dozen of the names above him either graduated this season or were traded in August. Here’s what Eric Longenhagen of FanGraphs had to say about him in April:

Perez is a physical teenage outfielder with a more mature frame and an athletic swing that reminds me of Spencer Torkelson’s (visually, not in terms of the raw power). Perez can tag fastballs at the top of the zone but has a tendency to be very upright in his legs and swing over top of curveballs he might be able to go down and lift if he were more flexible. Even though he doesn’t have significant, frame-based power projection, I think he has a chance to hit enough to be a regular in a corner.

Meanwhile, Pipeline chimed in with the following:

That Perez possesses a strong, physical frame for a teenager makes it easy to dream on his power potential from the right side of the plate. He also makes a lot of quality contact, combining his strength with a quick bat and lofty swing. His swing-and-miss issues aren’t uncommon for a player his age and stand to improve as he gains experience and learns to recognize spin better.

Perez’s below-average speed limits him to an outfield corner, and he spent much of his 2019 campaign manning right field in the AZL. He may be a better long-term fit in left, though, because his arm strength is only a tick above average.

To put some numbers on all of that, here are the scouting grades from those two sources. FanGraphs (FG) splits it into present-day and future-potential, while Pipeline (MLB) just boils it down to one number. FG also splits power into Raw Power and Game Power, but I’m just using Raw here for now:

They mostly agree across the board, rating all of his tools around average with no obvious standout skill but also no glaring weakness yet. The FG grades tend to be a tick lower, so their overall 40+ is probably around the same as the 45 from MLB.

Baseball America did not include Perez in their midseason Padres Top 30 list in late July, but they did have Mateo ranked at No. 21. Mateo ended up appearing in 22 games for San Diego this season, and he went 4-for-26 (.454 OPS, 20 wRC+) with three doubles, one walk, 11 strikeouts, and one stolen base.

When the A’s traded Mateo, it was as a last resort. He was out of minor league options so he couldn’t be sent down, and he hadn’t forced his way into winning a job on the Opening Day MLB roster. They could either put one of their Top 10 prospects on waivers and lose him for nothing, or find a trade for whatever they could get — and everyone knew it, so there was zero leverage on Oakland’s side.

Given that context, the smartest target for the A’s would be a younger, lower-level prospect. After all, the whole problem was they had too many MLB-readyish players in Triple-A burning up option years, so it wouldn’t make sense to dump one of them just to add another. Instead, start over with someone who has more time on their clock.

In both those senses, the A’s did perfectly fine here. They were never in position to match Mateo’s value in the trade, and the Baseball America rankings are the most direct sign that they didn’t. But they absolutely got more than nothing, fetching an arguable Top 20-30 name from one of the better farm systems in the sport. And it came in the form of a teenage rookie-ball prospect who won’t add to the Triple-A logjam, and who can have a longer shelf life in the minors while he develops — he’s not Rule 5 eligible until next winter, so he won’t begin using options until at least 2022 if not later.

As for Perez himself, there’s never too much to say about such a young prospect. He has enough natural ability to be on the radar at a young age, and the rest will be a question of how develops those tools into on-field skills over the next few years. He’s the classic, talented low-minors lotto ticket, with a chance to be a good hitter and decent defender at an outfield corner.

Welcome to the A’s farm, Junior!

Side note: This is the second time in the last year (along with Jurickson Profar) that the A’s had a player they were on the verge of needing to release, and instead the Padres swooped in at the last minute to gift them prospect value in a trade. Thanks, San Diego!