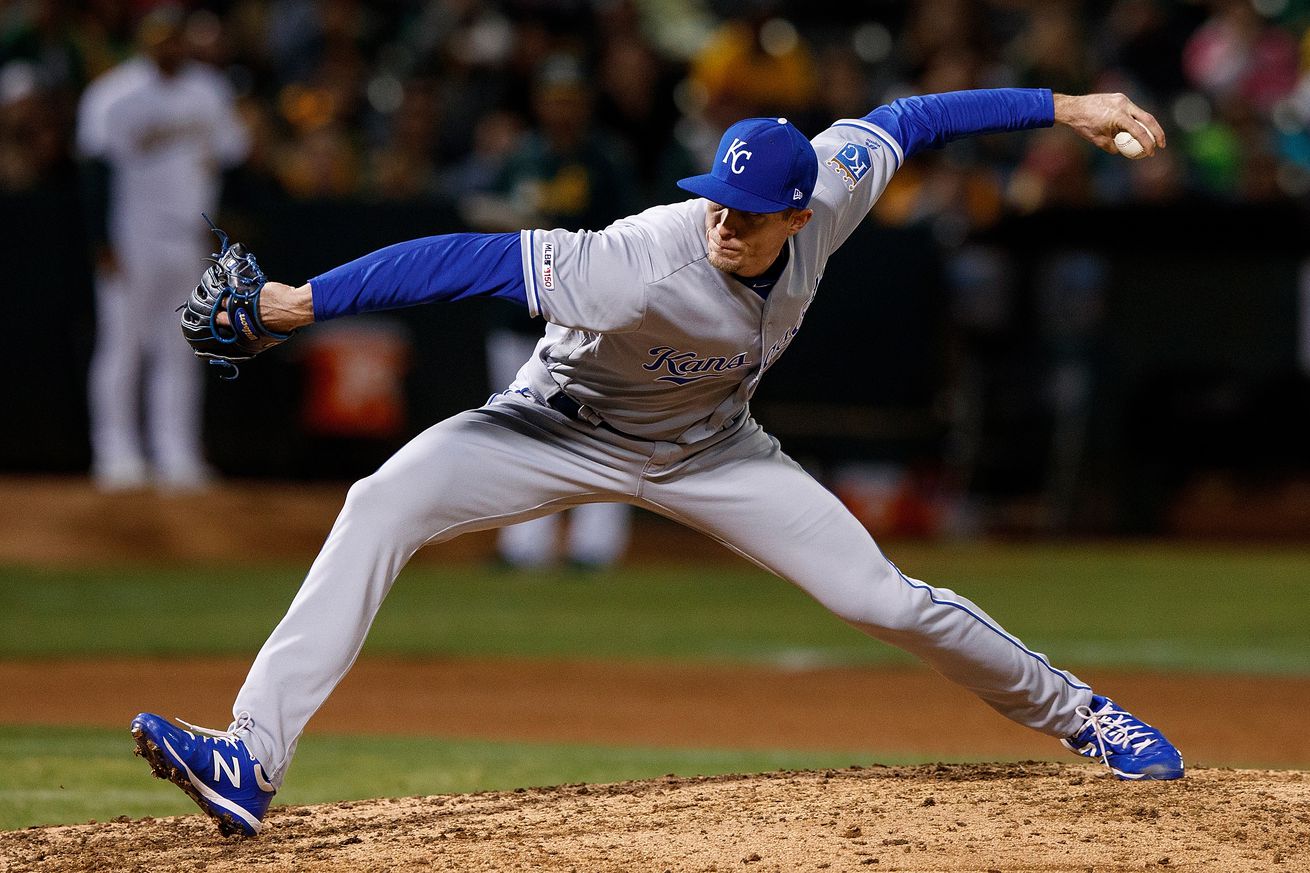 A’s are interested in the reliever, reports Susan Slusser of the S.F. Chronicle.

The Oakland A’s are still on the lookout for another relief pitcher, and they have interest in Tim Hill of the Royals, reports Susan Slusser of the S.F. Chronicle.

The left-handed Hill has spent the last two seasons in Kansas City’s bullpen. He posted strong numbers in 2018 that led to a merely mediocre ERA, but then he virtually repeated his stat line this past summer and was rewarded with much better results.

He also converted a save and nine holds while blowing just one lead (career: 25-for-28), and allowed a league-average 32% of his inherited runners to score (16-of-50) (career: 31%). He works from a sidearm/submarine arm slot and uses a three-pitch mix that features a sinker, four-seamer, and slider, with the fastballs averaging around 90 mph. That arsenal helps him induce a high rate of grounders, 59.8% for his career (that’s 12-highest among MLB relievers during that span, min. 30 innings pitched).

Contractually, Hill hasn’t even hit arbitration yet. He’s got five years of team control (2020-24), with the first two coming at league minimum salary before he reaches his three arby years. He’ll pitch next season at age 30, and he’ll stay inexpensive for a while.

The A’s bullpen has a few absolute locks from the right side, including Liam Hendriks, Yusmeiro Petit, and Joakim Soria, with other options including Lou Trivino and J.B. Wendelken (and an ongoing rumor about free agent Sergio Romo). There are also two lefties already in Jake Diekman (re-signed) and T.J. McFarland (waiver claim who signed a contract). However, while a third southpaw might sound like more than normal, Diekman’s ability to handle righty hitters makes him play more neutral, and Hill is in a similar boat.

While everything about Hill makes him appear to be a LOOGY, he actually isn’t one. He has all the ingredients — the funky low arm slot, a career average of about two outs per appearance, and a difference of 240 points in his career OPS allowed against righties and lefties (and nearly 300 points in 2019). But look at his platoon splits again and you’ll see his career K/BB ratio (a more reliable split in such a small sample) is slightly better against righty hitters than lefties (and significantly better in 2019).

Look further at his Statcast splits, and his career xwOBA against righties is an excellent .287, far better than league average. Meanwhile, his average exit velocity against righties (88.7 mph) is just a tick above the overall league average. His Statcast numbers against lefties are even better than those, and what little power he’s allowed has come almost entirely against righties, but the point is that he’s perfectly capable of facing hitters from both sides once he’s subject to the new three-batter minimum rule.

In terms of trade cost, Slusser reports the Royals are “believed to have interest in some of the A’s young middle infielders,” specifying Sheldon Neuse and also mentioning Franklin Barreto and Jorge Mateo. Our friends at Baseball Trade Values suggest that any one of those three players would be a fair swap for Hill value-wise.

Analysis: Hill has the strengths of fellow lefty soft-tosser McFarland, plus more. He’s got the massive grounder rate that would look great in front of Oakland’s infield, and he worked multiple innings at a time in several games last year, but he also brings a far superior K/BB rate and doesn’t carry the stark platoon splits. He’d certainly be an upgrade over the status quo, whether that means replacing McFarland or just joining the crew alongside him as a third lefty and overall another quality, reliable reliever.

While the suggested trade cost isn’t nothing, dealing one of those high-profile young infielders would help clear up a dire logjam that’s going to reach a breaking point in the spring. Someone from that trio is likely going to have to go before Opening Day, so it’s better to do it on purpose now in exchange for an equally valuable return rather than DFA’ing one in March and losing him for nothing. And anyway, Hill is himself a cheap, long-term guy, so Oakland would have something to show for the deal for quite a long time too.

There are presumably lots of relievers on the radar, and plenty of ways to cash in on one of these infielders, but this would be a perfectly good trade on both those counts if the A’s end up making it.