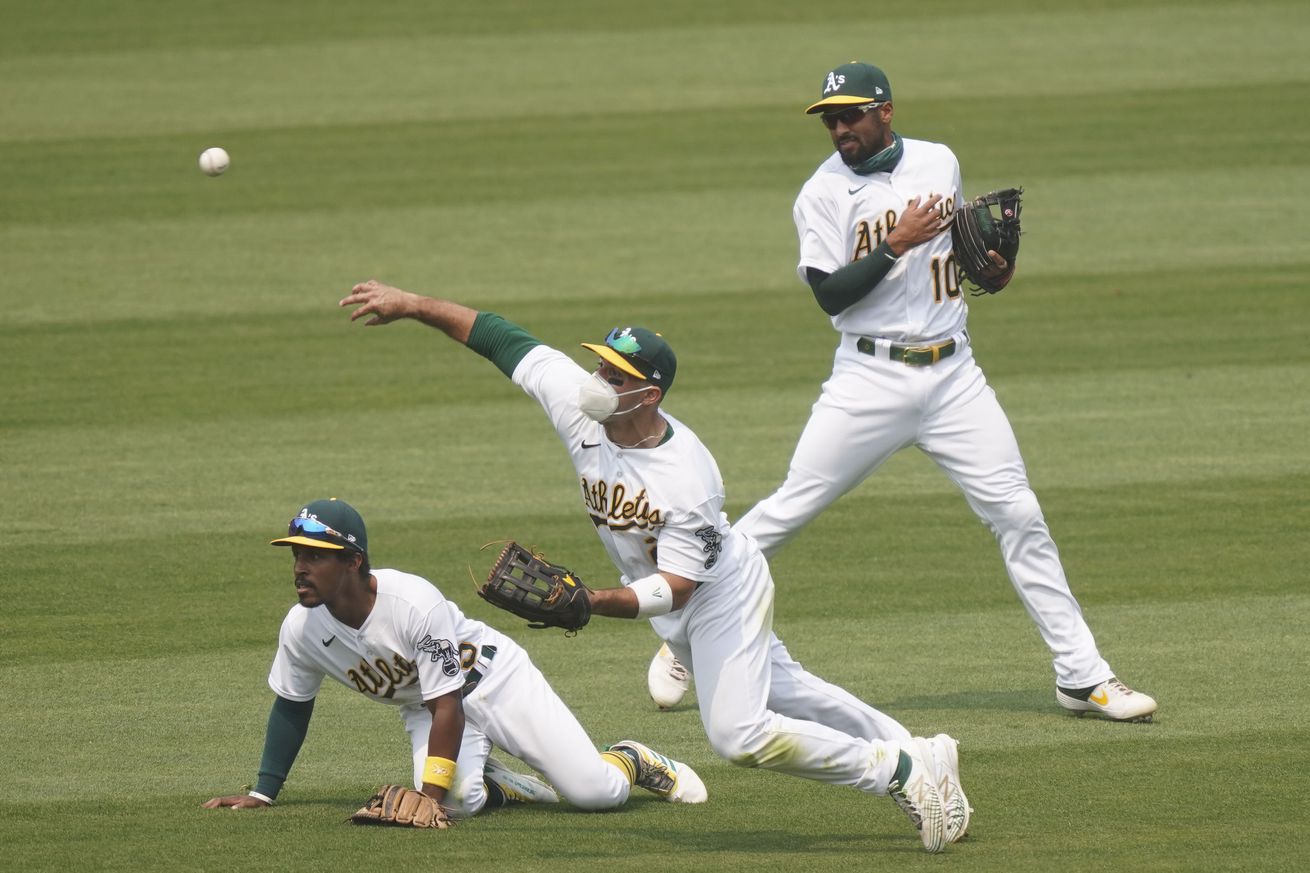 “These shifts are getting REALLY confusing.” | Kyle Terada-USA TODAY Sports

Quoth the raven: SQUAAAAWWWWKKKK!!!!!! Because, you know, he’s a raven.

OK, time for some random musings around the A’s, baseball, and possibly ominous black birds…

I love Marcus Semien and would prefer him to stay with the A’s, where his east bay roots play well. But when his agent, Joel Wolfe (who I knew because he played on the 1991 Southern Oregon A’s as an outfield prospect) comes out and throws “$100M contract” out there, my first response is laughter and my second response is, “Not here, please.”

I’m not sure where the “best free agent SS since Jose Reyes” idea is coming from — agents gonna posture, I know — but for all his terrific character, improvement, and a heckuva 2019 season, Semien is still far from the guy you want to invest 9 figures in.

We are talking about a 30 year old shortstop who spent his prime years improving defensively in a way that I’ve never seen — but who is about to take on Father Time in the quest to avoid beginning to decline. Just a reminder: Father Time remains undefeated.

We are also talking about a player who has bookended 2019 with 5 seasons in which he was almost the definition of league average at the plate. To pay Semien $60M, $80M, heaven forbid $100M, for a commitment into his mid-30s, you would pretty much have to bank on him returning to his 2019 form at the plate, which is quite the gamble considering he has only ever had one year like it. I don’t envy the team that takes Wolfe’s bluff.

I just want to push back on comments I’ve seen from time to time around Tommy La Stella’s defense. In contemplating the idea of bringing La Stella back to play 2B, you will hear the idea that La Stella’s defensive limitations could be masked by a shortstop with great range (e.g., Andrelton Simmons, Jose Iglasias), by Matt Olson’s prowess at 1B, by a stellar infield around him that starts with the Matts on the corners.

I think it’s wishful thinking to bank on the players around La Stella somehow sparing us the pain of a weak 2Bman. There’s a lot of acreage between a 1Bman and a 2Bman, and between a 2Bman and a SS, and in baseball the ball will find you. Plenty of balls are going to be “the 2Bman’s or nobody’s,” and on double play balls hit to the left side only one man is on the pivot (shifts notwithstanding).

Heck, when La Stella arrived the A’s had that enviable infield around him, with Chapman, Semien, and Olson, and it didn’t stop us from enduring weak relays to 1B, misjudged soft fly balls over his head, pasta diving that took the form more of pasta watching.

And if your solution is to “cheat” Olson farther to the right, or your shortstop farther to his left, what you are doing in the process is yielding more space elsewhere — you might see a double down the 1B line and not think of Tommy La Stella, and yet the two may be inter-connected.

Congratulations to Kim Ng for becoming the first female GM in any major sport, as well as quite possibly the first GM of any gender not to have a vowel in his or her last name. (How long until she finds a position for Kent Hrbek on her team?)

My reaction to the news tends to be more along the lines of: what took everyone so long? Qualified females have been around for decades — heck, this one interviewed 9 times before landing a gig — and as if we didn’t have enough reminders these days it’s just another one of how far we have to go before we have any semblance of an equality-based, prejudice-free society.