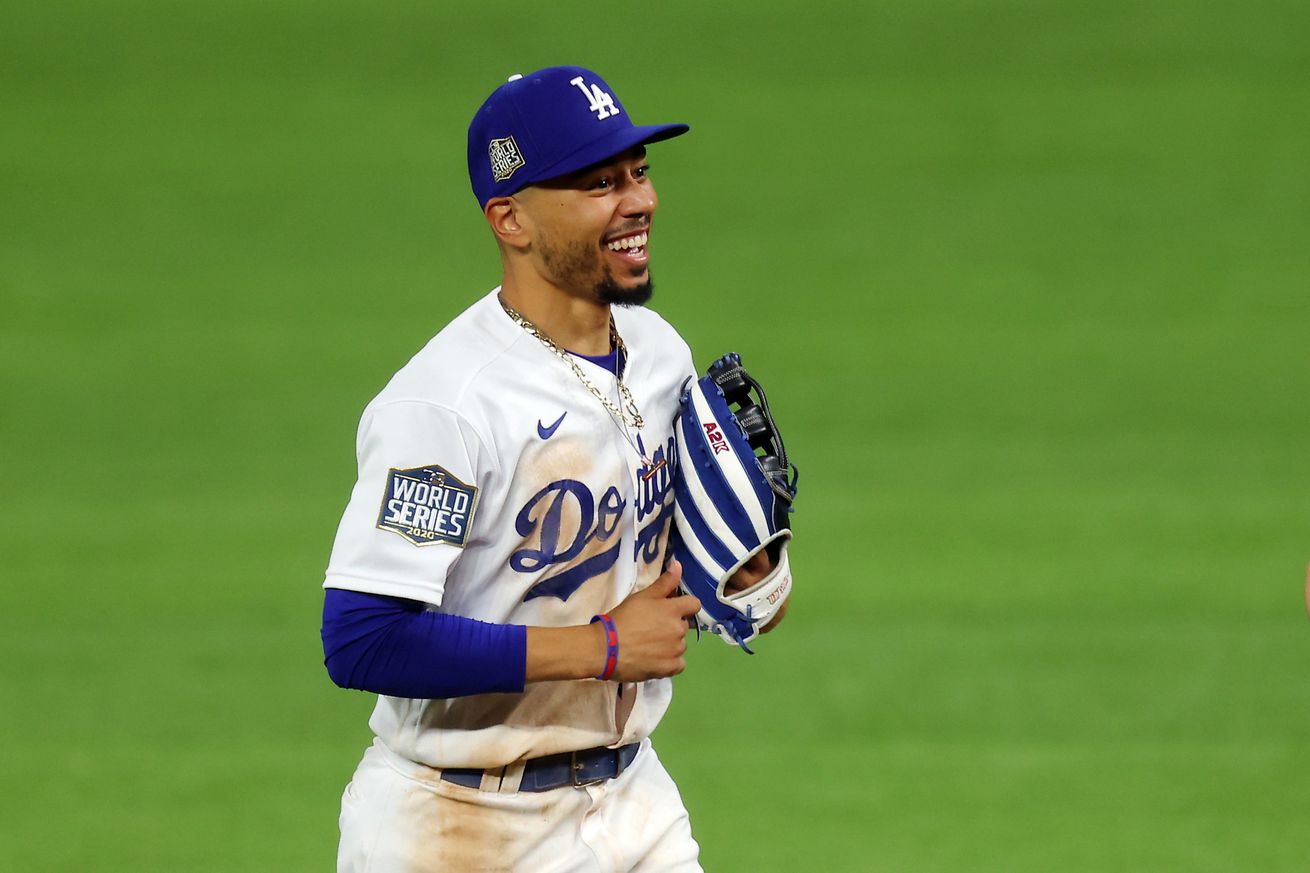 The 2020 World Series is underway, and the Los Angeles Dodgers won the first game 8-3 over the Tampa Bay Rays to take an early lead in the best-of-seven. Mookie Betts, Cody Bellinger, and Clayton Kershaw led the way for L.A.

The scoring didn’t begin until the bottom of the 4th, with a solo homer by Bellinger. In the top of the 5th, Rays center fielder Kevin Kiermaier responded with a two-run dinger to take the lead, creating some interesting history.

But then the Dodgers took over. Betts began the 5th with a leadoff walk and then stole second base (and later third as well), and the rally was on. Another walk, a failed fielder’s choice, and three singles led to a four-run inning, and L.A. never looked back.

Betts kept the pressure on. He led off again in the 6th, and this time he homered, setting some more World Series history.

Mookie Betts is the first player to ever homer, steal two bases and score two runs in a World Series game.

The only other player to homer and steal two bases in a WS game is Chase Utley in Game 1 of the 2008 Series.

He’s also the first player since Babe Ruth in 1921 to walk and steal two bases in the same inning in the World Series.

On the other side of the ball, Kershaw overcame his own negative postseason reputation by spinning a quality start. He threw six innings and allowed just one run, missing a ton of bats along the way.

Clayton Kershaw got 19 misses on 38 swings against him tonight

That 50.0% whiff rate is the highest in any start of his career (min 25 pitches thrown, including postseason)

For more on the game, check out the Dodgers recap from True Blue LA, and the Rays recap from DRaysBay.

The two teams go back at it tonight in Game 2. Tampa Bay hands the ball to 2018 Cy Young winner Blake Snell, while L.A. turns to Tony Gonsolin — however, Gonsolin pitched on Sunday in the NLCS, so he could see an early hook with another starter like Dustin May helping in long relief.

Here’s the schedule (all times Pacific, all TV broadcasts on Fox):

Still a lot of Series left to play!

Nieckula managed in the A’s farm system from 2006-19, including the 2014 Texas League champion Double-A Midland RockHounds (click here to see his history)

I have been informed that my position of Field Coordinator within the Oak Athletics Player Dev system has been eliminated. Although I am disappointed I was not formerly offered a “reassignment”, I am deeply appreciative and respectful of my tenure with the A’s! #forevergrateful

This joke is out of control

The world continuing to gradually open back up?

Professional sporting events in California may return to stadiums at 20% capacity once a county moves into the orange tier, or 25% capacity in the yellow tier. Ticket sales will be restricted to customers within a 120-mile radius of the park. Masks will be required.

A’s statement on the matter

Statement from the A’s: pic.twitter.com/qc7COaUqev

As you’ll see in the next tweet, this news isn’t official yet, but this is the current rumor (for Single-A, where the A’s are currently affiliated with the Beloit Snappers)

Any A’s affiliate changes remain very much TBD. Lots of moving parts involved. Even minor league contraction, while expected, isn’t fully official. So even if there are considerations of moving, it will be some time before we have real clarity: https://t.co/ELRzbSNDit

DID YOU VOTE YET? It’s good practice for November.

Who should be your AL Reliever of the Year presented by @TheHartford?

The winner will be announced before Game 4 of the #WorldSeries.