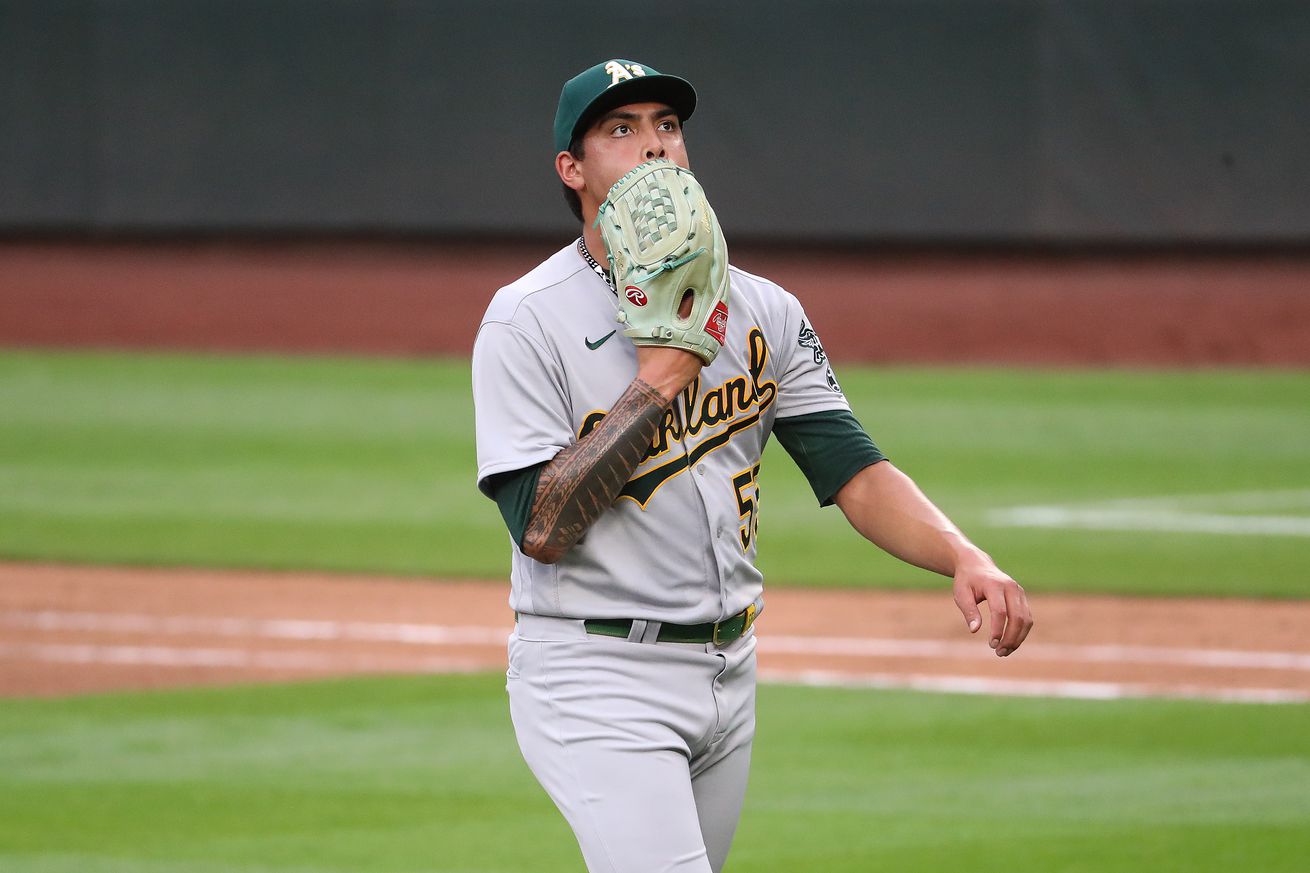 Oakland has no answers in their first road game of 2020

The Oakland A’s were hoping to avoid a slow start in this shortened 2020 season, but that’s exactly where they find themselves through seven games.

The A’s managed just three hits on Friday in their first road game of the year, falling 5-3 to the Seattle Mariners for their third straight loss. They went 1-for-6 with runners in scoring position, raising their total to 1-for-20 during that trio of defeats.

Oakland did at least come through once in a clutch spot in this game, for the first time in several days. Marcus Semien had runners on the corners in the 8th inning and launched a triple to right-center, driving in a pair. Ramon Laureano followed with a sac fly to cash in on another run, but it was too little too late for the A’s as they couldn’t complete the comeback in the 9th.

On the other side of the ball, starter Sean Manaea had a repeat of his first outing last weekend — great for a few innings, and then suddenly unraveling and allowing a crooked number. He was perfect and efficient through three frames this time, but couldn’t keep it going in the 4th and 5th as he went a second time through the lineup.

One bright spot on the pitching side was rookie Jordan Weems, making his second career appearance after his solid MLB debut on Tuesday. He encountered a jam in the 6th, but worked through it and finished with two scoreless frames.

It was a tale of two games again for Manaea. For three innings he operated with surgical precision, looking like an absolute ace. Then in the 4th he reverted to a more hittable form, and the Mariners were able to put up a pair of run-scoring rallies to knock him out.

First, the good part. He retired the first nine batters he faced to breeze through three innings, and he needed only 33 pitches to do it. He began with 11 straight strikes and finished with 25 in those three innings, including six swinging, all of which was good for three Ks. There was only one well-hit ball, and even that was a lazy flyout.

Even better, the lefty showed his best velocity of the year. In those opening frames he hit 91.0 mph or better a dozen times, and topped out at 92.0, a season-high. Between the extra tick and strong control, he looked fantastic.

But then two things happened. One is that he began the second time through the order, and the other was that the velocity began to wane. He hit 91 a few times against the leadoff man of the 4th inning, but didn’t clear 90 again the rest of the night, topping out at 89.8 from then on. His control went from great to just good, and he only earned two more swinging strikes over his final 36 pitches.

Even considering all that, the 4th wasn’t as bad as it looked. The leadoff single was a grounder that beat a heavy shift, and would normally have been an out. Another single followed, and then Kyle Seager ripped a double down the RF line — it was reasonably well-hit but it was still a grounder, and a foot to the side puts it in Matt Olson’s glove for a 3-6-3 GIDP. This isn’t to let Manaea completely off the hook, but for what it’s worth these weren’t deep drives to the gaps or over the wall.

Manaea nearly got out of it with no further damage, but the defense behind him faltered. Platinum Glover Matt Chapman charged a slow grounder for a play that, while tough, he usually makes 110% of the time. This time he skipped the throw and Olson couldn’t corral it, leaving the batter safe at first and allowing Seager to score from second.

The 5th began with two on and one out, and that was enough to chase Manaea and bring in the A’s bullpen. J.B. Wendelken came in and induced a comebacker that should have been an inning-ending double play, but he threw the ball wide to second base and everybody was safe, including the runner scoring from third. Another single brought home Manaea’s other bequeathed runner before Wendelken finally got out of it.

By all rights only two of the runs should have been earned, but you can’t assume the (inning-ending) double play on Wendelken’s error so the runner that scored on that still counts. The other unearned run was on Chapman’s error.

There are still bright sides in that line. No walks and no homers are a nice foundation to build off. He’ll need to last more than three good innings per game in order to be a viable starter, but one dominant time through the lineup is better than zero so it could be worse. But also it’ll have to get better, and sooner than later in this summer’s short campaign.

For his entire career so far, Matt Chapman has been a superhuman defender. He makes incredible plays the likes of which you’ve never seen anyone else pull off, and he rarely makes any kind of mistake. But he hasn’t looked like himself so far in 2020.

To be clear, the plays Chapman isn’t making are spectacular ones. You wouldn’t expect many (most?) other third basemen to make some of them. It’s just that Chapman usually does, and that’s one reason he’s an MVP-level talent. When he’s not converting them, it’s noteworthy.

On Opening Day, he made a throwing error to put on a runner who eventually scored. That weekend he lost a foulout in the sun and let it drop right next to him (the batter was later retired anyway). On Tuesday he let Charlie Blackmon reach on a bunt (he later scored), where he normally throws out Dee Gordon on the same play, though this was reasonably ruled a hit. Now he’s got a second error after his whoopsie on Friday, and it once again brought home a run.

Leaving aside the sun-related drop, that’s still three throws that Chapman usually makes every time. There are a hundred good excuses in this weird season, so the point isn’t that there’s anything to worry about long-term, just that this is something that’s happening right now. They say defense doesn’t slump, but here we are.

Jordan Weems had an encouraging MLB debut on Tuesday, even though he gave up a couple runs — including the one on Chapman’s Tuesday bunt miscue noted above. He looked good again on Friday.

There was some trouble in his first inning, the 6th. A leadoff single glanced off Semien’s glove at short, and a walk put a second man on. J.P. Crawford then nearly hit a three-run homer on a hanging changeup, but it hooked about 10 feet foul. On the next pitch, Crawford grounded into a double play, getting Weems out of the jam.

The 7th inning was cleaner, requiring just 11 pitches to go 1-2-3. That included a strikeout of Kyle Lewis, one of the hottest hitters in the league so far this year.

His debut was arguably better, despite what it says in the runs column, but this was a mighty fine follow-up. He still threw strikes but wasn’t in the zone as much as last time, and his fastball was a tick lower too, topping out at 95.8 instead of 97. The biggest difference was probably his changeup, which was on point Tuesday but all over the place Friday — and the only one that did hit the zone was the meatball to Crawford, the definition of a bad strike. If Crawford’s drive had landed fair for three runs, we’d be less enthused about this outing, but overall Weems is showing some legitimate promise.

While the A’s are 1-for-20 with runners in scoring position over their last three games, at least there’s one clutchy thing they’re doing well. They’ve had 11 chances this year with a runner on third and less than two out, and they’ve successfully driven him home nine times, with Laureano being the latest example on Friday. When you can’t buy a clutch knock, at least it’s nice to know there’s some proper situational hitting going on to salvage some runs.

In a normal year, it would be far too early to panic, as we’d be just a week into April with five-plus months to go. But there’s no long haul this summer, and the talent that we know this team has will need to shine through ASAP before they start digging a hole in the standings. The sky’s not falling yet, but it won’t stay up there forever.

The final frustrating thing about this game is that, even with the tepid offensive showing, it still would have been enough with better defense. Take out the errors by Chapman and Wendelken and this could have been a gutsy 3-2 victory, the kind that makes you comment that contending teams find a way to win even when they’re not at their best.