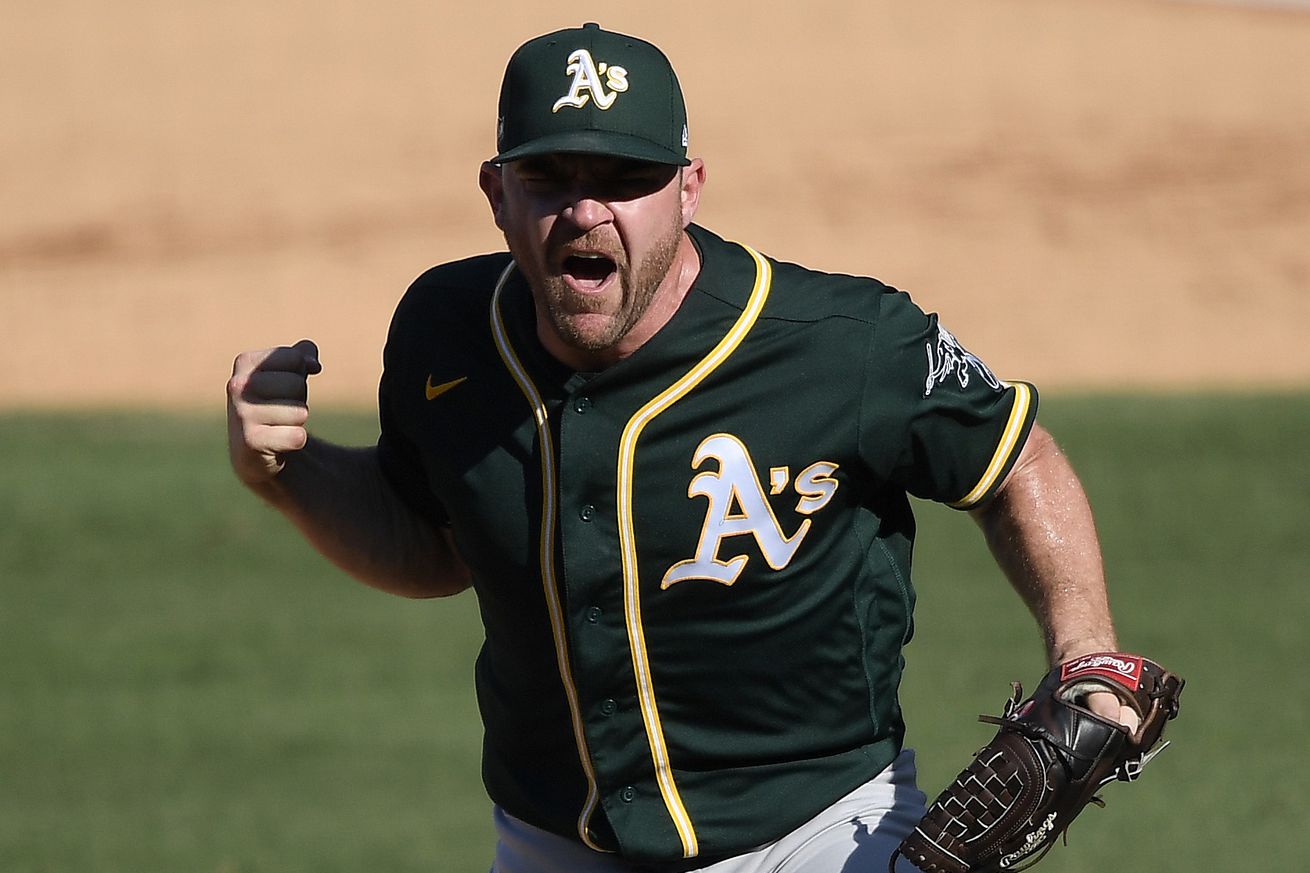 First Oakland A’s pitcher ever to win the award

It turns out the third time is indeed the charm.

Oakland A’s closer Liam Hendriks was named the 2020 AL Reliever of the Year on Saturday, the first time the green and gold has ever won the award since its inception in 2014. A’s pitchers had been snubbed for the honor each of the last two years, but they finally got one in their third deserving attempt.

This season, Hendriks left no room for doubt. He backed up his 2019 breakout with a sparkling 1.78 ERA, but that wasn’t even Top 10 in the AL. What set him apart were his absurd 1.14 FIP and 1.97 WPA, both of which ranked second in the majors among relievers. He saved 14 of his 15 opportunities, with the only misstep coming on Opening Day, and the A’s didn’t lose a game he appeared in until the meaningless final weekend of the season — and even that slipup was fueled by the new extra-inning free-runner rule.

The right-hander followed his brilliant regular season with a memorable postseason. His first appearance came in Game 2 of the Wild Card Series, when he tried for a six-out save but needed help from Jake Diekman to retire the final batter. After throwing a season-high 49 pitches, he came out the next day in the 9th inning of Game 3 and locked down the save to clinch the series victory. He took it up a notch in the ALDS, authoring a three-inning fireman-style performance to save one of the most exciting wins in recent franchise history.

Those dozen strikeouts came among just 25 batters, while only seven reached base.

The Reliever of the Year Award is named after a pair of Hall of Fame closers, Mariano Rivera for the AL version and Trevor Hoffman for the NL. The 31-year-old Hendriks had the following to say, via the team’s press release:

“Honored is an understatement,” said Hendriks. “It’s humbling to win an award that bears the name of the greatest closer in history.

“I’m extremely thankful to my teammates. If they weren’t behind me on the field, I wouldn’t be half the pitcher I am today. A huge thank you to the bullpen for sharing years of invaluable advice and experience with me.

“Thank you to the coaching staff and the entire organization for believing in me and giving me the opportunity to play in the green and gold. To my agency, MVP, for all the work you do behind the scenes. A huge thank you to Codify for keeping me ahead of the game. A sincere thank you to the panel of voters. To be recognized by your greatness is a true honor.

“Finally, to A’s fans everywhere, I’ve had the privilege to represent you since I arrived here five years ago and I thank you from the bottom of my heart.”

By all rights, this should be Hendriks’ second straight Rivera Award, but he was snubbed badly in 2019. It could also be the A’s third straight, but Blake Treinen was passed over in 2018. However, since it began in 2014, the award has been mostly tied to save totals, as only one out of 12 winners from 2014-19 didn’t rank in the top three in their league in saves (exception: 2018 Josh Hader, who struck out 143 batters).

In 2018, Treinen had one of the best relief campaigns in history, but he lost out to the shiny 57 saves of Edwin Diaz despite beating Diaz in Cy Young voting. In 2019, Hendriks was the best in the AL by a comically wide margin, but he didn’t take over the closer role until midseason so his 25 saves were outshined by the 37 saves and Yankee name power of Aroldis Chapman.

This year Hendriks met the traditional saves threshold (second in AL), but there’s also a sign that the voters might be starting to look beyond that singular stat. In the NL, Devin Williams of the Brewers won despite recording zero saves, on the strength of an 0.33 ERA, 0.86 FIP, 53% strikeout rate, and .179 xwOBA — absolutely ludicrous numbers even in a small 27-inning sample.

Unfortunately, this long-awaited win comes at the worst possible moment for the A’s. Hendriks is a free agent this winter and already figured to be a long-shot to fit within Oakland’s budget, and a high-profile honor like this is one more impressive entry on his rapidly growing resume. He also won AL Reliever of the Month once each in 2019 and 2020, and was an All-Star in 2019 (and surely would have been again if they’d picked teams in 2020).

Still, it’s an emphatic exclamation point on an incredible journey that we all got to witness. Hendriks was acquired by the A’s ahead of 2016 and was promising but inconsistent for a few years, and by mid-2018 he was designated for assignment. After nobody claimed him on waivers, he stayed in the organization, made the necessary adjustments, and finally tapped into the heights of his lofty potential. His meteoric rise saw him start a playoff game later in 2018, then earn an All-Star berth in 2019, and now in 2020 he’s got the Rivera Award. Just two years after clearing waivers, the Aussie is officially the best reliever in the league.

From down under, all the way to the top.

Note: Before the Rivera/Hoffman Award, there was the Rolaids Relief Man award from 1976-2012. It was based entirely on a statistical formula, and the A’s won it four times — Dennis Eckersley (1988, 1992), Billy Koch (2002), and Keith Foulke (2003). Rivera won it five times, tied with Dan Quisenberry for the most ever, though Rollie Fingers won four and presumably would have gotten more if it had existed during Oakland’s championship years.