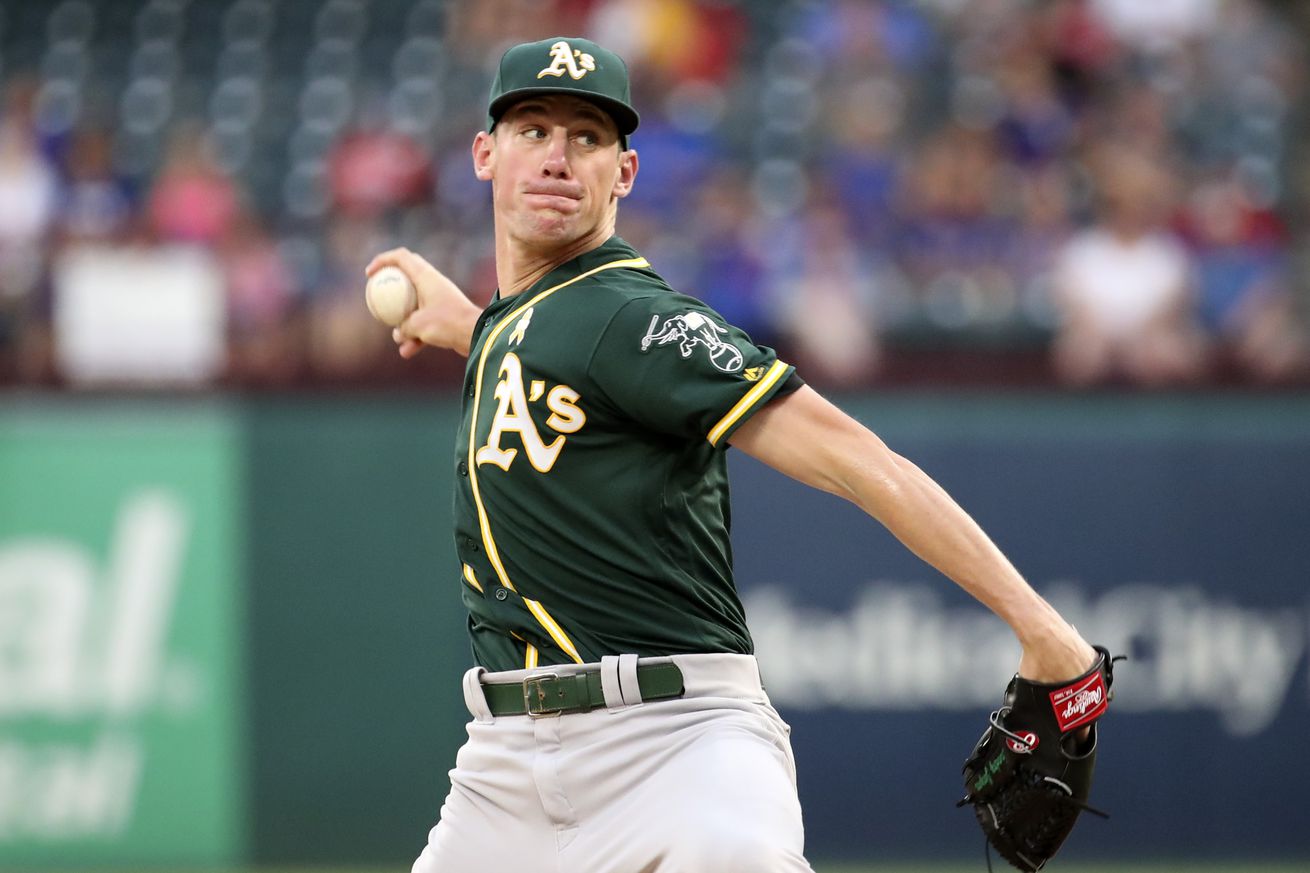 12 legs, if my counting skills are good. As the A’s Cruz into the Ginter Meetings (do you see what I did there — those two were traded for one another!), the idea of a 6-man rotation has been floated.

There’s a reason you never see 6-man rotations actually employed. It’s hard enough to find 5 quality starting pitchers — just look at most teams’ #5 SP for proof — and even if you have 6 SPs you have to be willing to take a handful of starts away from your best ones in order to make room for all the rest.

However, the 2020 A’s could be in that rare position in which all the stars align to suggest a 6-man rotation. Oakland has two SPs, Jesus Luzardo and A.J. Puk, whose workloads will need to be carefully managed as they return from TJS. And if you’re worried about taking starts away from the SPs with the best stuff, two of those would be Luzardo and Puk themselves.

So yes, you might toss a few of Frankie Montas’ innings to Chris Bassitt, but Montas has workload issues of his own to consider having had most of his seasons to date curtailed either by random non-arm injuries or terrible shopping habits.

Rather than monitoring innings by stashing Puk at AAA or Luzardo in the bullpen, the A’s could opt to open the season with a 6-man crew in which each SP would be poised to make about 27 starts, which translates to roughly 165 IP. The presumptive 6 out of camp would be Montas-Manaea-Fiers-Luzardo-Bassitt-Puk, and only Fiers is not returning from major injury with full seasons of SP innings under his belt.

So if the A’s have the depth (currently Dalton Jefferies, Paul Blackburn, Grant Holmes, Parker Dunshee, and Brian Howard figure to be on hand as “next men up” behind the aforementioned 6), and the right crew for the gig, what’s the downside? It starts with committing to a 7-man bullpen, which used to be the norm but which in this case probably means foregoing a long reliever.

Oakland is busily shopping for relievers this weekend, but currently the bullpen looks something like Hendriks-Soria-Petit-Trivino-Wendelken-Diekman-McFarland. Is this enough to get through games that include the occasional early knockout? In theory, you could have a guy like Bassitt, maybe even Luzardo or Puk, available in a pinch on his “day to throw” between starts (e.g., start Monday, a couple relief innings Thursday, start Sunday) to guard against those tricky games where the SP has to be pulled after 2.1 IP.

Perhaps the biggest concern is that a team knows, going into a season, that its depth will likely be tested early and often. So if your Plan A revolves around the 6 SPs noted above, and one goes down, you are already dipping into your AAA pool of big question marks and that’s only the first domino. Basically, you are always one more SP farther down on your depth chart and even the 2020 A’s don’t figure to be terribly excited about giving a lot of starts to #8-9 on their depth chart.

Of course there’s an easy answer to this particular concern, which is that when an injury hits to one of the “first 6” you always have the option of responding by shifting to a 5-man rotation — yes this gives you all the “workload concerns” the 6-man rotation was aiming to mitigate, but it just puts you back where you were going to be if you didn’t roll with a 6-man rotation for as long as it sustained.

I suppose one last question is whether it negatively impacts each SP to be taken out of their accustomed 5-day routine by adding the extra day between starts. Perhaps it’s worth noting that already SPs have to be a bit malleable because some weeks they pitch on their 5th day and some weeks, due to an off-day in the schedule, they pitch on their 6th day. But we know pitchers are creatures of habit and working as part of a 6-man rotation is definitely a different habit.

My own feeling as I type all this? As I lay out all the possible negatives, they exist but none of them seems like anything even approaching a deal-breaker. The positives — allowing Luzardo and Puk to join the rotation from the outset and still approach a post-season with a reasonable innings load, nursing Manaea’s arm in his first full season back from shoulder surgery, getting to October with nobody worn out or over-extended, and still putting your best feet (arms) forward with the likes of Bassitt and Puk (who might be smack in the middle of most rotations) at the back of the rotation — are hard to overlook.

6-man rotations just rarely work or make sense. Then again, the Oakland A’s are all about bucking conventional wisdom to squeeze brilliance out of limited resources. For as long as those “front 6” are healthy and ready to go, I’m having some difficulty seeing how it’s not the best avenue for the 2020 A’s to pursue. But there are other potentially appealing options as well, and that brings us to the end of this article and to our poll…And hopefully your comments weighing in.