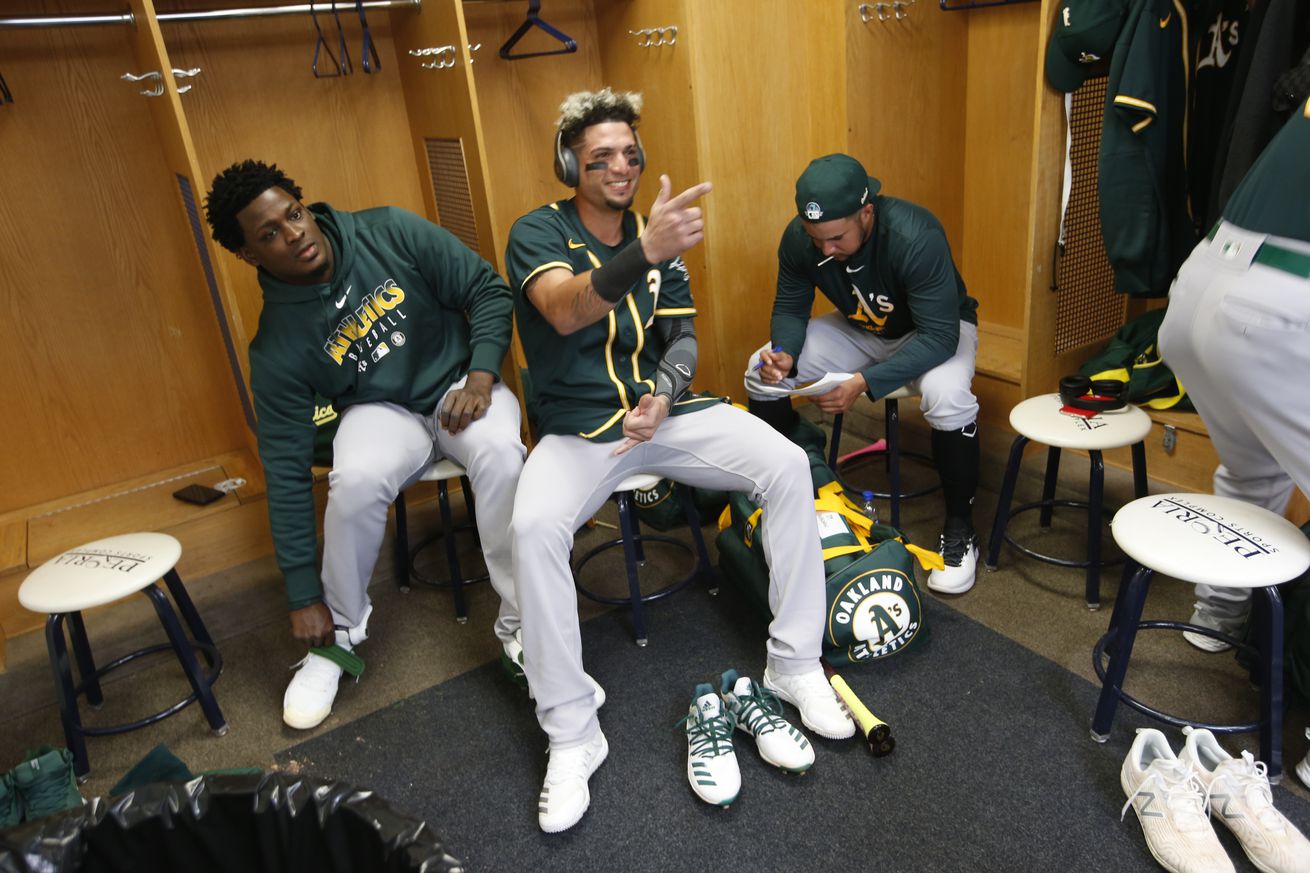 There were no minor leagues in 2020, but a few prospects got to stay active

Here at Athletics Nation we love to follow the Oakland A’s farm system in addition to the big league club. However, there was no minor league season in 2020 due to the coronavirus pandemic, which meant a yearlong hiatus from the prospect world — both in terms of the players’ development, and our own tracking of them since there was nothing to track.

However, a handful of prospects at least got to stay active at the team’s alternate camp in San Jose, as part of their 60-man player pool. They didn’t play against other organizations, but they could at least do intrasquad work and get in-person instruction from coaches and perhaps some of their more experienced teammates.

Those alternate camps already ended, and then in early October the fall instructional leagues began. The A’s currently have 46 prospects at fall camp, which lasts the rest of the month, and you can see the full roster here (behind an Athletic paywall).

While there aren’t any meaningful stats to analyze, there are at least some updates on which names have stood out the most this summer:

Note: We’ll take a look the prospects who graduated to MLB this year in a separate post.

Let’s begin with the summer report from Mayo. He leads with an overall top position player and top pitcher, and the picks are outfielder Luis Barrera and right-hander Daulton Jefferies.

Barrera receives praise for his all-fields hit-tool, running, and fielding, which begins to paint the picture of what type of player he projects to be — and that doesn’t even mention his throwing arm, which has an enormous 70-grade on FanGraphs. Injuries stalled his progress last year but he never stopped producing when on the field. Farm director Ed Sprague called him “one of the most improved guys in our organization.”

Jefferies entered the year at No. 4 on our Community Prospect List after a breakout 2019, so hopes were already high. Mayo refers to his “starting-pitcher profile” and praised him for maintaining his velocity after Tommy John surgery — 93-94 mph, touching 95-96, and indeed Statcast clocked him as high as 95.6 in the majors in September.

Both players are on the 40-man roster already, and Jefferies got to make his MLB debut. It lasted just two innings and went poorly, but in ways that are easy to chalk up to rookie jitters and general inexperience. Remember, despite turning 25 this summer, he’s only thrown 101 professional innings.

Mayo mentions the recent teenage signings, infielder Robert Puason and catcher Tyler Soderstrom, with generally favorable reviews of their early progress. Regarding Puason, he relays the following quote from Sprague: “It was more valuable than a short season in Arizona or Vermont, just being able to watch the older guys go about their business. It’s tough to get younger payers to understand how important routines are. Being exposed at such a young age to guys who were up and down from the big leagues was important.”

Finally, three more names receive honorable mentions. Shortstop Logan Davidson, last year’s 1st-round pick, made progress on both sides of the ball. Pitcher James Kaprielian got experience working as a reliever for now, and also made his MLB debut. Reliever Miguel Romero added a changeup to his fastball/slider repertoire, which could raise his ceiling if the pitch develops into a plus.

While the player pool at the alternate camp mostly included only the very top prospects, the current instructional league reaches deeper into the system. There’s a little bit of overlap, as some players moved from San Jose to fall camp, but several top names are missing because they were needed for Oakland’s MLB postseason taxi squad.

Among our preseason Community Prospect List, the following are at fall camp. Remember everyone is really a couple spots higher now due to graduations and trades, and two 2020 draft picks were added after the fact, so their updated rankings are included at the end:

A few notable takeaways: Guldberg was limited by injuries in his college career, but he’s healthy and receiving praise for his hitting, defense, baserunning, and IQ. Beck has something extra to prove after he was the best prospect omitted from the summer player pool. Millas is a wild card, as a 2019 draftee who still hasn’t played a pro game, but Eppard likes his work on both sides of the ball. McCann has added some intensity that was previously lacking from his makeup. Eierman “worked harder maybe than anyone that we had in the six months that we had off” and “has been the most impressive player here so far in this camp.”

Click the Mayo and Lockard links above for more details on all these players.