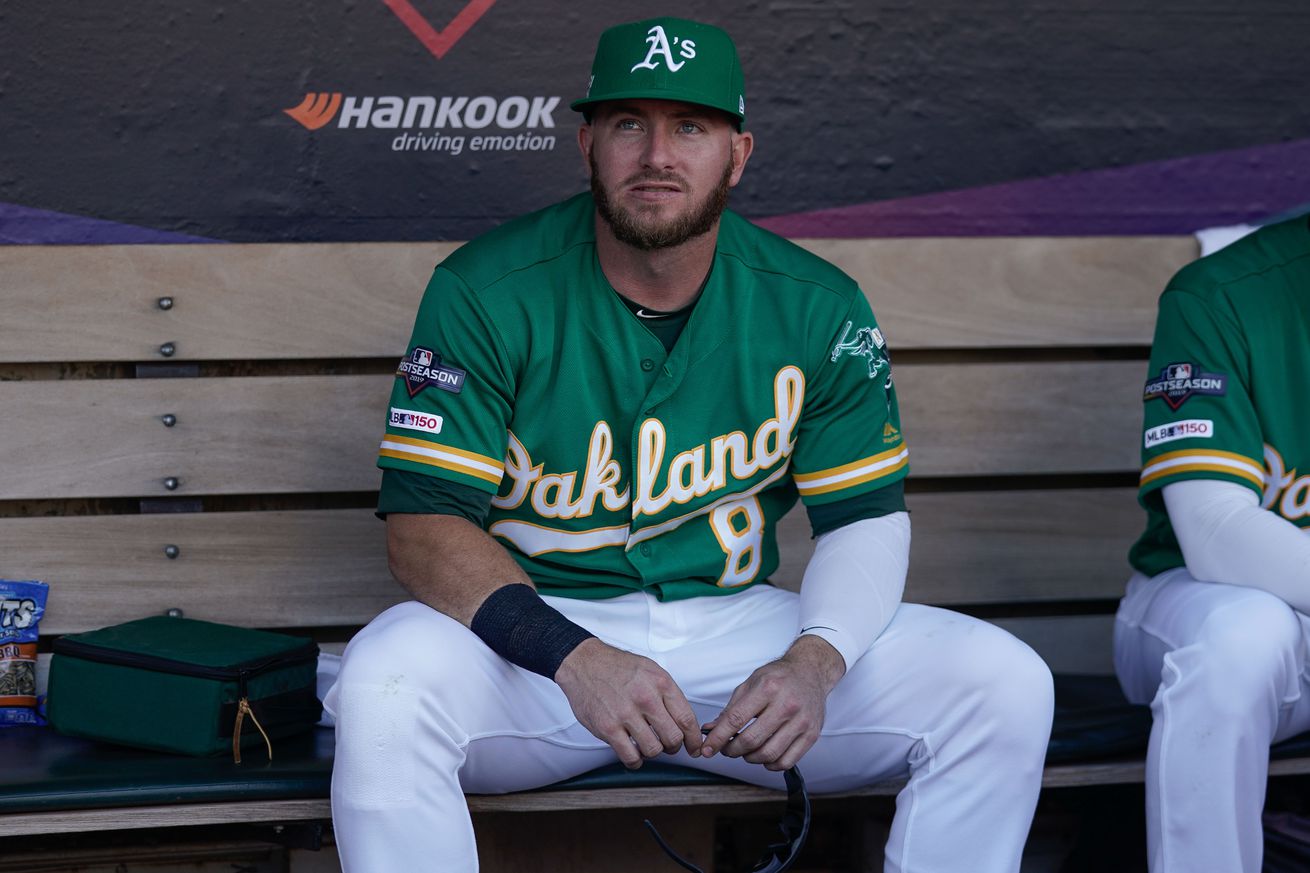 How Grossman sticking around will affect the depth chart in 2020

Of the Oakland A’s players that were tendered contracts on Monday, Robbie Grossman is perhaps the most surprising. Grossman is coming off a somewhat disappointing season and plays a position that is crowded in Oakland, but he’s an established big leaguer and almost certainly would have been picked up by someone else if the A’s had decided to move on. What did Oakland like about Grossman and what does this mean for the outfield situation next year?

An outfield can never have enough depth, as the A’s found out last year. Injuries to Stephen Piscotty and Ramon Laureano gave Mark Canha and Robbie Grossman many more plate appearances than expected in 2019. By the end of the season, even the formerly unknown Seth Brown was getting regular at-bats for the big club.

Grossman provides depth and, as a switch-hitter, also provides a left-handed bat in a lineup that is heavy on righties. Oakland has a bevy of upcoming lefty or switch-hitting outfielders in the upper minors (Brown, Dustin Fowler, Skye Bolt, and Luis Barrera) but, evidently, the front office feels that Grossman is currently the best option, or at least a safe option worth keeping around. Brown pushed him for playing time in left field at the end of the year, making 11 starts there in September alone while Grossman made only nine starts that month (and mostly in right field). But the fact that Grossman was tendered a contract suggests they aren’t just planning to hand the position to a rookie in 2020.

Grossman had a poor offensive season last year, with his BA, OBP, and OPS all significantly lower than they had been in three solid seasons with the Twins. However, his season stats were greatly impacted by a very slow start and an even worse finish. During the meat of the season, his numbers were pretty solid — he hit .300 in June with an OPS over .800, and in July and August his OBP jumped up to .375 and .374, respectively. He also won some games with huge hits, including a walk-off knock against the Astros on August 16 and this two-run triple against the Angels in September:

Underlying these improvements was a massive uptick in BABIP, suggesting that his early-season struggles may have been at least partly due to bad luck. He’s typically had a high BABIP in his career so maybe there’s something about his approach that affords him above-average success when putting the ball in play. He generally ranks near the bottom of the league in hard hit percentage and barrel percentage according to Statcast, so it’s a bit of a mystery.

Grossman also provides value as a defender, as he was a Gold Glove finalist in left field last year. Labeled as a shaky defender when acquired by the A’s, Grossman led American League left fielders in total zone runs and in range factor per game while turning in a perfect fielding percentage. He also led all AL left fielders by a wide margin in SABR’s advanced metric, SDI, and earned positive scores on other major metrics like DRS and UZR. It remains to be seen whether he can repeat that career-best defensive performance in 2020, but for now he doesn’t seem to be a liability with the glove.

It’s difficult to project how Grossman will be used in 2020. As the roster is currently constructed, Canha, Laureano, and Piscotty are the likely starters in the outfield. Laureano and Piscotty seem like safe bets to play every day, at least from the outset, and Canha may have played himself into an everyday role as well with his strong 2019 campaign. If this is the case, then Grossman would be a depth piece that plays in case of injury or days off for the starters.

Grossman may also be slated for a platoon role, but it’s hard to envision who he would platoon with. Canha is the most likely candidate, but he actually had more success against right-handed pitchers than lefties last season. A smarter choice would be Piscotty who has crushed southpaws his whole career but struggled some against righties. However, with Piscotty being a middle-of-the-order, integral part of the lineup when healthy, this seems less probable.

One thing is certain: Grossman will probably see as few at-bats from the right side as possible. If a fill-in against a lefty is needed, Chad Pinder will be available, but Grossman will likely be the first man off the bench against a right-hander. He will have to play well to hang on to this role as Brown, Bolt, and others will be fighting for at-bats as well.