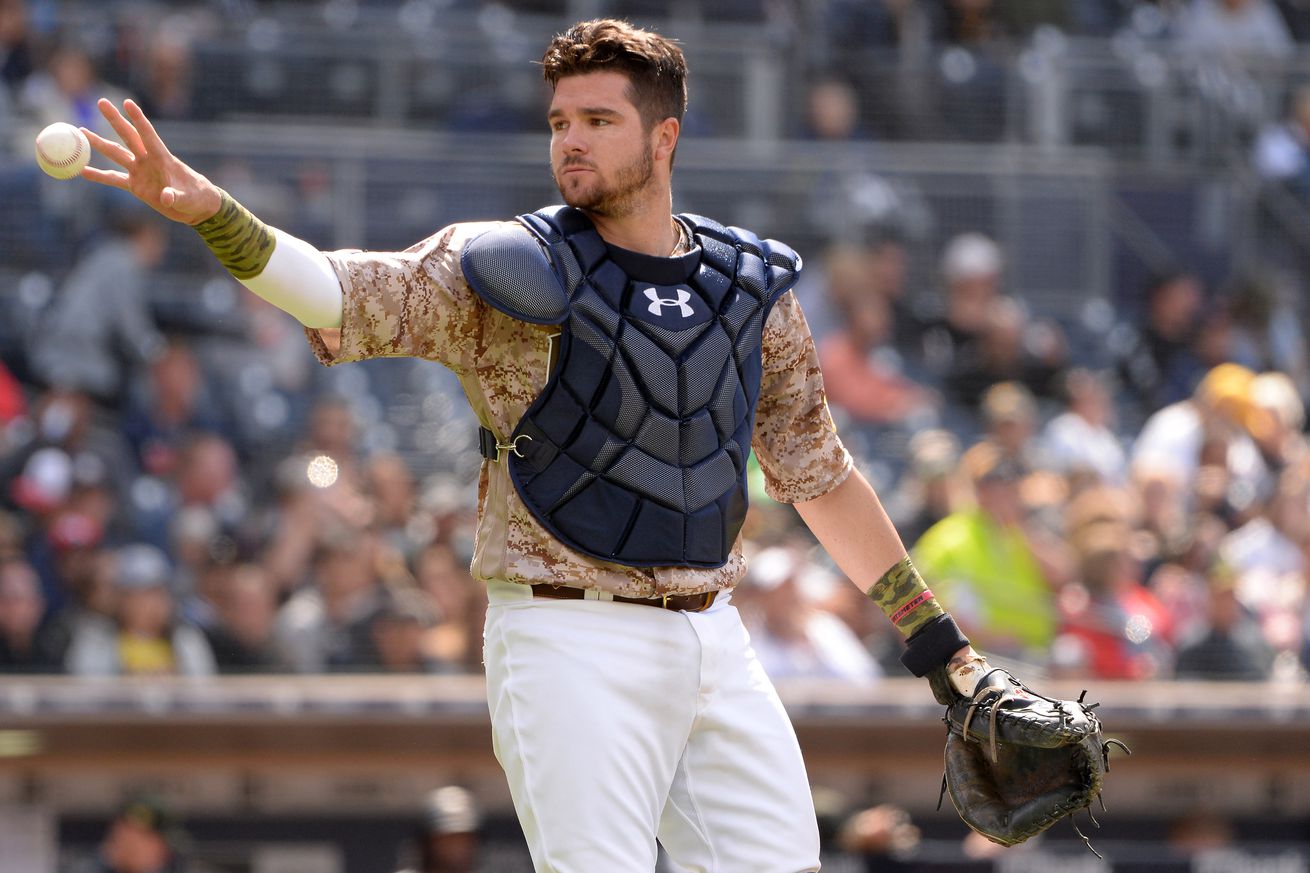 Getting to know the recent trade acquisition.

The Oakland A’s were able to trade a player (Jurickson Profar) just hours away from being non-tendered, in exchange for a cost-controlled, left-handed hitting catcher who has a clear path to make the 2020 Opening Day roster.

Let’s start with some basic facts about Austin Allen:

He also made the Padres org list at MLB Pipeline in 2018, and got the same 45 Overall grade.

Note that, while he only has 71 career plate appearances at the MLB level, he won’t be eligible for our Community Prospect List next month because he exceeded 45 days on the 25-man roster prior to Sept. 1. He has officially graduated from prospect status.

Allen is a bat-first backstop who has worked hard since his college days to improve his skill behind the plate. San Diego officials noted improved flexibility as he raised through the system at a pace of a level per year, and Baseball Prospectus’ Fielding Runs Above Average (FRAA) has graded Allen in the positive the last two seasons.

Often described as “country-strong” he has legitimate Plus Raw Power and has shown enough Hit tool to get to it during game time. He’s hit 20+ HR in the upper minors two years running and has managed to keep his K-rate under 20%.

The scouts who believe in Allen think that he’s at least serviceable behind the plate, enough to get his bat in the lineup. Allen bounced between El Paso and San Diego a few times last year, but his last two-week stretch in AAA saw him go 21-for-45 (.467 average) with 11 doubles and 5 homers vs. 5 strikeouts. He turns 26 in January and is ready to challenge for a job on Oakland’s Opening Day roster.

“Serviceable” is the best anyone will rate Allen’s play behind the plate. He’s got Average arm strength but he’s not a particularly good thrower. After throwing out 36% of baserunners in 2018 he regressed to 22% in 2019. He’s not now and never will be agile behind the plate, and any slacking on his conditioning could make him untenable as a backstop. He gave up 3 passed balls in 90 GS in 2018 but allowed 9 in 74 GS in 2019.

Left-handed pitchers can keep him in check but he does damage when he connects. He runs like a Catcher and if he can’t stick behind the plate then 1B or DH are his only other options. He’s made 21 starts at 1B (over 3 years) so there’s no way of knowing how functional he is as a non-crouching defender.

From trades that brought back John Jaso, Derek Norris, and Jason Kendall to draft picks spent on Kyle McCann (2019, 4th) to Jeremy Brown (2002, 1st) it is clear that Oakland will accept defensive question marks at catcher if they think the guy can hit. If Austin Allen can hit like a lot of scouts think he can AND be serviceable behind home plate then he’ll make Oakland’s 26-man roster; although whether he’s the primary back-up Catcher remains to be seen.

Will Oakland be comfortable heading into a contending year with a Murphy and Allen tandem that have combined to start 27 games in the Show? Beane’s track record suggests not and expanding to 26-man rosters would allow the A’s to add a veteran back-up who could help mentor the inexperienced backstops and set up Allen for a C/1B/DH role. Three Catchers on the big league roster would help Oakland “match” Allen with experienced pitchers who already know how to game plan, hold runners, and generally work their way through a line-up.

My guess is the A’s will give most of the Spring reps to Murphy/Allen/Heim and wait to decide on adding a vet until just before the Opening Day roster needs to be set.