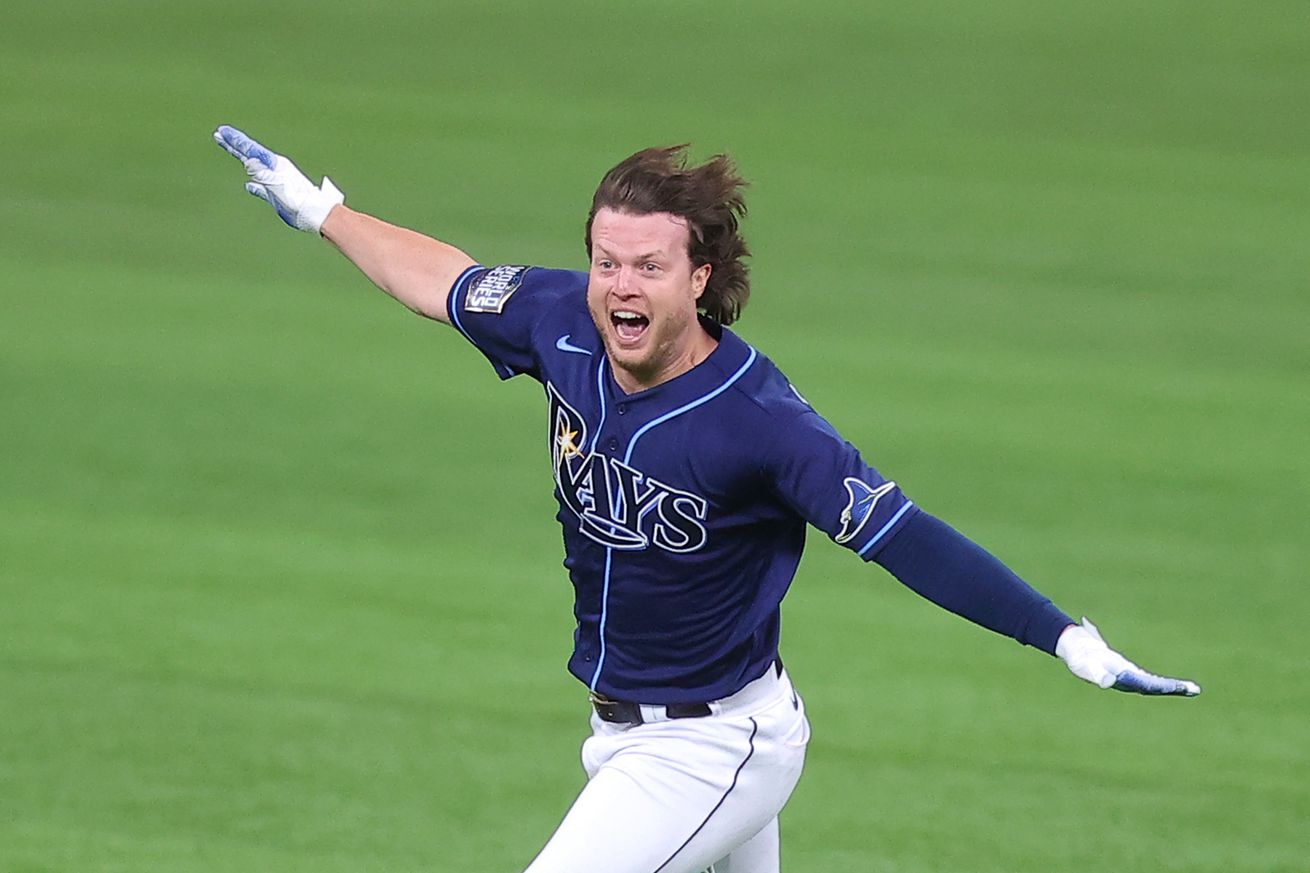 “I’m not a flathead!” | Photo by Ronald Martinez/Getty Images

When they call baseball “that craziest of games,” they’re referring to ones like last night’s Game 4 of the World Series.

The 2020 MLB season has, ultimately, lived up to my one hope and dream and that was to serve as a genuine distraction until the big event of November 3rd (and by that I mean, of course, the announcement of the gold glove winners). Last night’s game was as exciting, and memorable, as any you’ll see and Alberto Callaspo didn’t even bat (too soon).

Some random notes and observations around Game 4…

I actually don’t think Kevin Cash’s decisions were as off base as they may have appeared at a glance. Ryan Yarbrough isn’t so much a starting pitcher as he is a long-man-who-sometimes-begins-with-the-1st, so he was probably never going to go more than 4 IP. Ryan Thompson became the bridge that got the Rays through 4.

Cash was working on information that he had, and I guessed, and that was the availability of Blake Snell, on his “day to throw,” to pitch 1-2 IP. So all Cash did was to move his relievers, normally for the last 3 innings, up a couple frames to match the urgency of the moment. I suspect Snell was always in play behind them.

I am not as sold on Cash’s choices for the lineup against Julio Urias. He went “whole hog platoon,” which is the “Rays way” but swapped too much defense for RH bats. If you have watched, with amazement, Ji Man Choi’s defense at 1B, and have appreciated Joey Wendle’s facility at 3B, you wonder if it was really worth weakening the infield defense so much to get the bats of Mike Brosseau and Yandy Diaz in there.

Never was the question more apt to ask than when Brosseau dove with futility for an RBI double that Wendle might have secured. The Rays are built on defense and almost paid a dear price for compromising just to get a couple of “ok bats” in there.

Just consider how the game kept turning on inches, if not millimeters. Brandon Lowe, diving low when he needed that dive to be just a hair more angled upwards, as Joc Pederson’s line drive ticked off Lowe’s glove for a 2-run single that was, until the final pitch, the game’s biggest moment.

Or Randy Arozerena, with 2 outs and 2 strikes in the 9th, somehow spitting on a Kenley Jansen cutter that missed the outside corner by an inch — as Arozarena, by about the same amount — held his swing up just enough.

Who has the edge now? Well the Dodgers have the whole “We have great players everywhere you look” thing going — there’s no question that the Rays are the underdog each time they take the field.

But on the pitching side it’s less clear. Tampa Bay is set up with it’s “big 3” for games 5, 6, 7 with Tyler Glasnow, Blake Snell, and Charlie Morton on turn. For the Dodgers the good news is they have Clayton Kershaw tonight and Walker Buehler (unless it’s his day off, Matthew Broderick) for game 7. Game 6, however, could be tricky as it is currently set up to be a “bullpen game”.

Available pitchers for game 6 include SPs Tony Gonsolin and Dustin May, who have been, respectively, decent and awful, SP Alex Wood and occasional “opener” Joe Kelly. It’s not ideal for the Dodgers for a game that is now guaranteed to be played.

As for tonight, Cash had to go “all in” to win — and did thanks to Brett Phillips, Chris Taylor channeling his inner Avasail Garcia, and Will Smith forgetting how to catch a baseball — and doesn’t have too robust a bullpen available to him. Most likely everyone is available if a bit tired, and in the cases of Fairbanks, Castillo, and Anderson are coming off of performances that weren’t inspiring.

For 3-4 more days, it should be a heck of a ride. And then we’ll focus on those gold gloves.