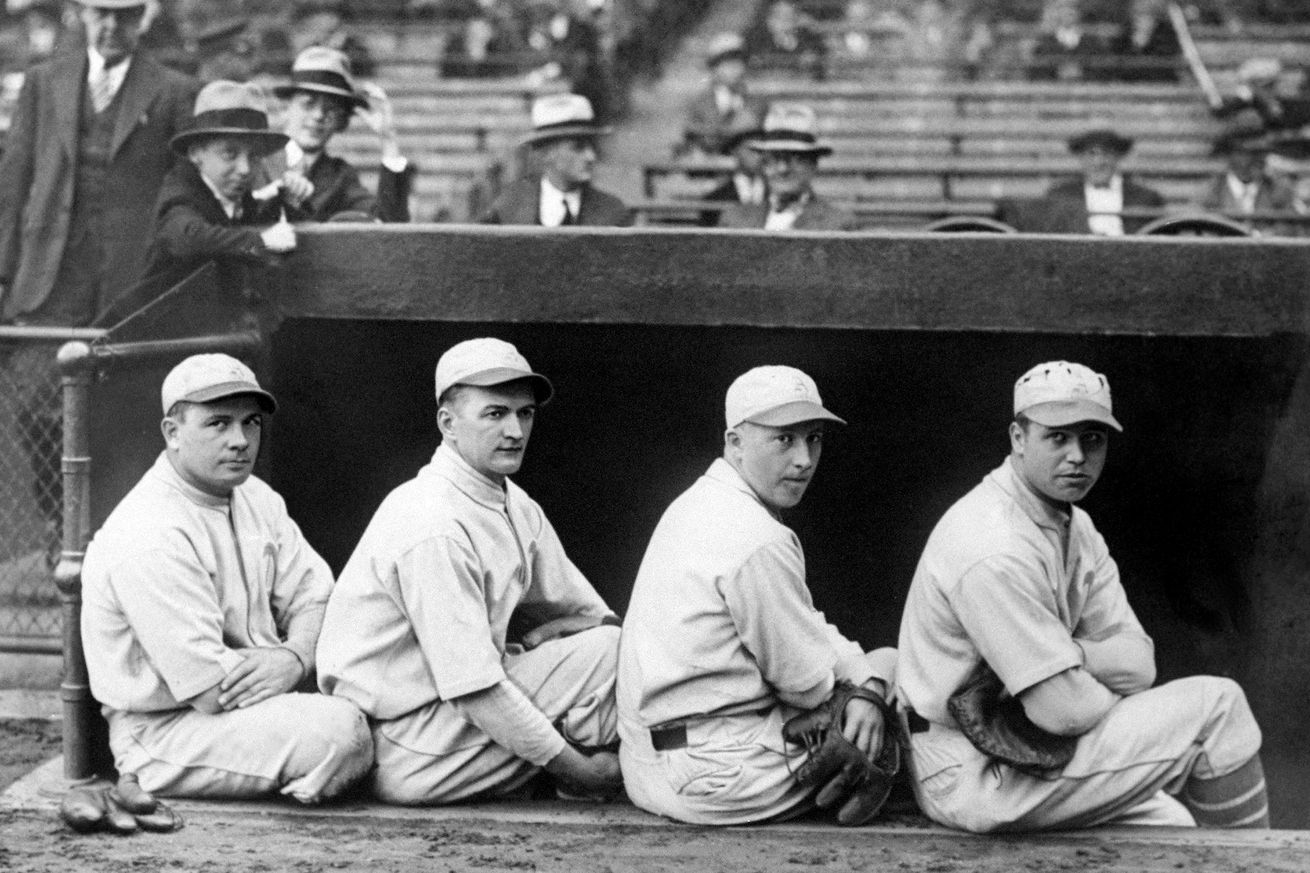 Eight walks in one day

The 2020 MLB season is on hiatus during the coronavirus pandemic, so we’ve got some time to burn and a baseball void to fill. Fortunately, there are decades of Oakland A’s history to look back on, and even rerunball is better than no ball at all. Let’s reminisce!

Here’s the latest “this date in history” from A’s info manager Mike Selleck:

On May 21, 1930 Max Bishop walks five times in the first game of a doubleheader against New York and adds three more in the second game…on May 21, 1974 Reggie Jackson becomes the first Oakland Athletic to reach 200 homers in an 8-1 win at Minnesota. #ThisDateInAthleticsHistory

This one is from yesterday, so it’s not quite “today in A’s history” anymore, but close enough. Missing the strike zone is kind of the theme of this story anyway.

Max Bishop isn’t an especially well-known name these days, but he was a star for the Philadelphia A’s. He played 10 seasons for the team from 1924-33 and helped lead them to three straight World Series appearances, winning it all in ‘29 and ‘30. He was surrounded by Hall of Famers like Jimmie Foxx, Lefty Grove, Al Simmons, and Mickey Cochrane, but in two of those AL pennant years he ranked third and fifth on the team in WAR (including hitters and pitchers). He was in the good-but-not-iconic territory of players like Joe Rudi or Carney Lansford on later A’s teams.

In particular, Bishop was known for his ability to take a walk, in the days before everyone realized the true value of that skill. He drew 100+ walks in eight straight seasons, and he’s one of three players in history to draw one in at least 20% of his career plate appearances, trailing only Ted Williams and Barry Bonds. His career .423 OBP ranks 15th all-time, surrounded by legendary names above and below him on the list. All of his time on base helped him score 100+ runs four times (115+ twice), including all three pennant years. That, combined with strong defense at second base, made him a significant contributor to a roster that won 313 games over three summers.

Bishop’s prolific walking didn’t happen out of nowhere, though. In foreshadowing of things to come decades later for the A’s, Connie Mack wanted his leadoff man to reach base, even if it meant getting there via a free pass from the pitcher. SABR has an excellent profile on Bishop’s life and career, and it includes this passage:

Before the 1925 season, Mack urged Bishop to become much more patient at the plate, and to take a walk if the pitcher couldn’t put the ball over. The man later known as Camera Eye developed his eye deliberately, he explained to writer C. William Duncan: “Connie Mack wanted me to be a lead-off man, so I became a ‘base-on-balls hitter.’ With Baltimore, I was a slugger, leading the (Double-A International League) circuit in home runs one year.”

So it was no accident that Bishop set a record in the base-on-balls department. He was a modest .271 career hitter who was actively interested in drawing walks when possible, and he did so as frequently as anybody in history.

On May 21, 1930, the A’s played a doubleheader against the Yankees, in a matchup of heavyweights — the two teams combined to win all seven AL pennants from 1926-32. New York was led by Babe Ruth and Lou Gehrig, and had future Hall of Fame pitchers starting both games of the twin-bill in Red Ruffing and Lefty Gomez.

In the first game, Bishop walked five times in six trips to the plate, scoring twice as the A’s fought back from a six-run deficit to win 15-7. In the second game, he walked three times in five trips, but didn’t score in a 4-1 A’s victory. Overall he was 0-for-3 in terms of hits, but 8-for-11 in terms of reaching base.

The eight walks in one day set an MLB record, and as near as I can tell (after a thorough search through the Baseball-Reference Play Index) the record still stands. It has been tied once, though, by Bishop himself. On July 8, 1934, he walked four times in each half of a doubleheader, this time against the A’s as a member of the Red Sox. No one else has ever done eight in a day, and he did it twice.

When Bishop had his five-walk game in the first half of the 1930 affair, that also tied an MLB record at the time, and marked the second time he’d done so. That record was broken in 1938 when Foxx, then with the Red Sox, walked six times in a single game. Since then the six-walk feat has been matched three more times, by Andre Thornton (1984), Jeff Bagwell (1999), and Bryce Harper (2016, plus he was hit by a pitch too). There have now been 111 five-walk games in history, including Oakland instances by Rickey Henderson, Mark McGwire, Jose Canseco, and Bill North.

The A’s have been synonymous with walks in the 21st century, thanks to Moneyball’s role in showing how they’re a viable path to runs and wins. Even before that, their longtime star Henderson made them a big part of his game and retired with the all-time career lead in free passes, though he’s since fallen to second place. But it turns out their history of earning bases on balls goes all the way back to the Mackmen, who nearly a century ago brought us Max Bishop, one of the greatest ever in the art of laying off bad pitches and trotting to first base.