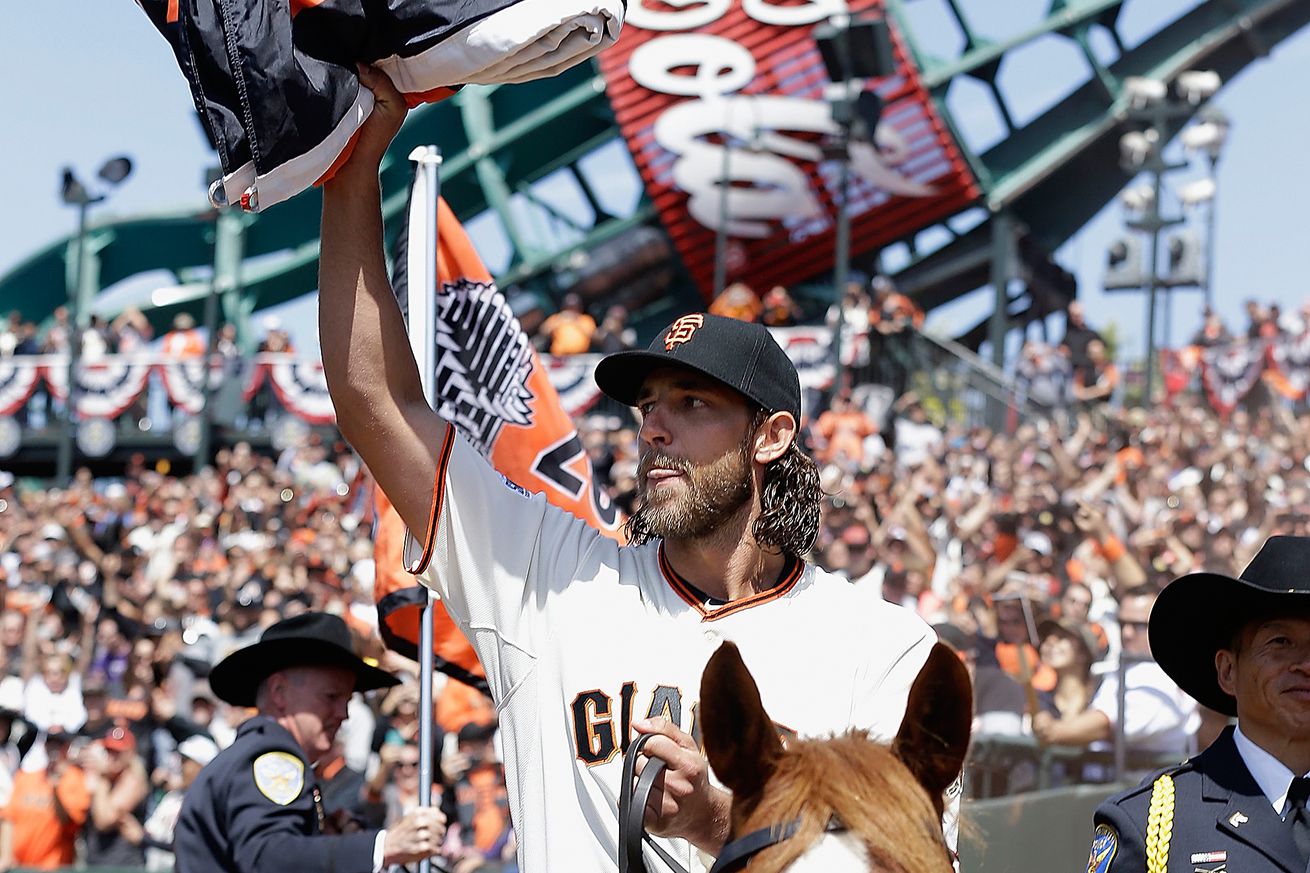 He changed the Giants and the game itself.

Everything has already been said about Madison Kyle Bumgarner.

His twisted, angry face gave the Giants an attitude they hadn’t had since, well, does it even matter at this point? Bumgarner is more than just a footnote or chapter in the book of the 2010s. He’s a story unto himself.

Before we say goodbye to him one more time through free agency, and because this is part of a series celebrating the Giants’ overwhelming success of the past decade, I’m going to generate one more item of content about the player who probably best embodies the decade that was for the Giants.

Buster Posey is certainly the face of the team, but Bumgarner’s totally fine but not staggeringly impressive regular seasons coupled with unqualified postseason success echoed the team’s behavior and accomplishments. He wasn’t the best until he absolutely had to be. And then, he was really, really good.

But we already know this.

And where Buster gave the Giants their first real Hall of Famer-type since Barry Bonds and Tim Lincecum arrived on the scene as their first modern ace, Bumgarner became the straw that stirred the drink. The tough rookie who operated across the spectrum of major league performance. An 0.1 inning start, followed by a quality start, then a dominant start, before the cycle repeated. Again, you know what happened in the postseason.

He has never won a Cy Young, and yet in the World Series, he’s been one of the greatest of all-time. You already know that, of course, but it’s worth repeating. A 0.25 ERA in 36 World Series innings. Shutting down the Royals three days after shutting them out. And from all that he became the ace of the franchise and one of baseball’s top aces, even if he never quite had the numbers to back that up in the regular season.

But in the regular season, he wasn’t miscast in the role. He just never quite pitched to that level of elite. So, his legacy, although unfinished, will always be tricky. He led the Giants, rescued the Giants, stabilized the Giants’ rotation, but also transformed the league and made postseason history — one of the best to ever do it based on national recognition.

Bumgarner wasn’t miscast as the team’s regular season ace, though, and we know that, too. He gave the team a personality it wouldn’t otherwise have. In the post-Lincecum & Cain years, he gave them a better shot than the rest of the staff at beating better teams.

One of the splits they’ve talked about this offseason as Bumgarner prepares to leave the Giants in free agency is that despite his hard hit rate and other concerning peripheral numbers in 2019, he was really strong against good teams (3.75 ERA vs. +.500 teams; 4.10 vs. -.500). That’s always been the case, though. For his career, he has a 3.19 ERA in 875.1 innings against winning teams.

But here I am trying to talk about Bumgarner’s decade of legacy with numbers when you already know that everything involving him is based on feelings. The Giants had their phenom ace, their All-Star genius catcher, and a Hall of Fame manager. They needed a tough guy to complete the set, and Madison Bumgarner played the role perfectly.

Many Giants have hated the Dodgers, but in recent years, few have been able to back up that dislike with talent. Bumgarner hated a lot of players and teams, but when he had them in his cross hairs, the grand design of Giants Baseball fell perfectly into place. He was a perfect vessel for our id. A perfect pitcher’s swing for our disdain of the American League.

He reprogrammed the Giants fan base to expect success after decades of failure. He gave sabermetricians the anecdotal evidence they needed to convince the rest of baseball to abandon its fixed mindset in bullpen management. Dude drenched pitcher’s mounds with his snot.

We were mesmerized by his slutter when we weren’t in awe of his big, sweeping delivery. He wasn’t baseball’s best ace, but he was the Giants’ ace, and that’s the defining feature of the past decade. The Giants never did it the way they were supposed to and every facet of their success would not have been duplicated by any other team if they had the choice. He performed as he did because the Giants knew what they had in him, a certainty that we could only feel and hope for without ever truly knowing from the outside looking in. On one October night, the dream became a reality.

Baseball’s bullpenning explosion came about because of Madison Bumgarner. The Giants spent ten years being antithetical to the theories and best practices of Major League Baseball with their key players, home stadium, and general approach, and it led to unfathomable success. His personal success brought the Giants’ brand to the masses, and in that way Madison Bumgarner changed baseball, too.