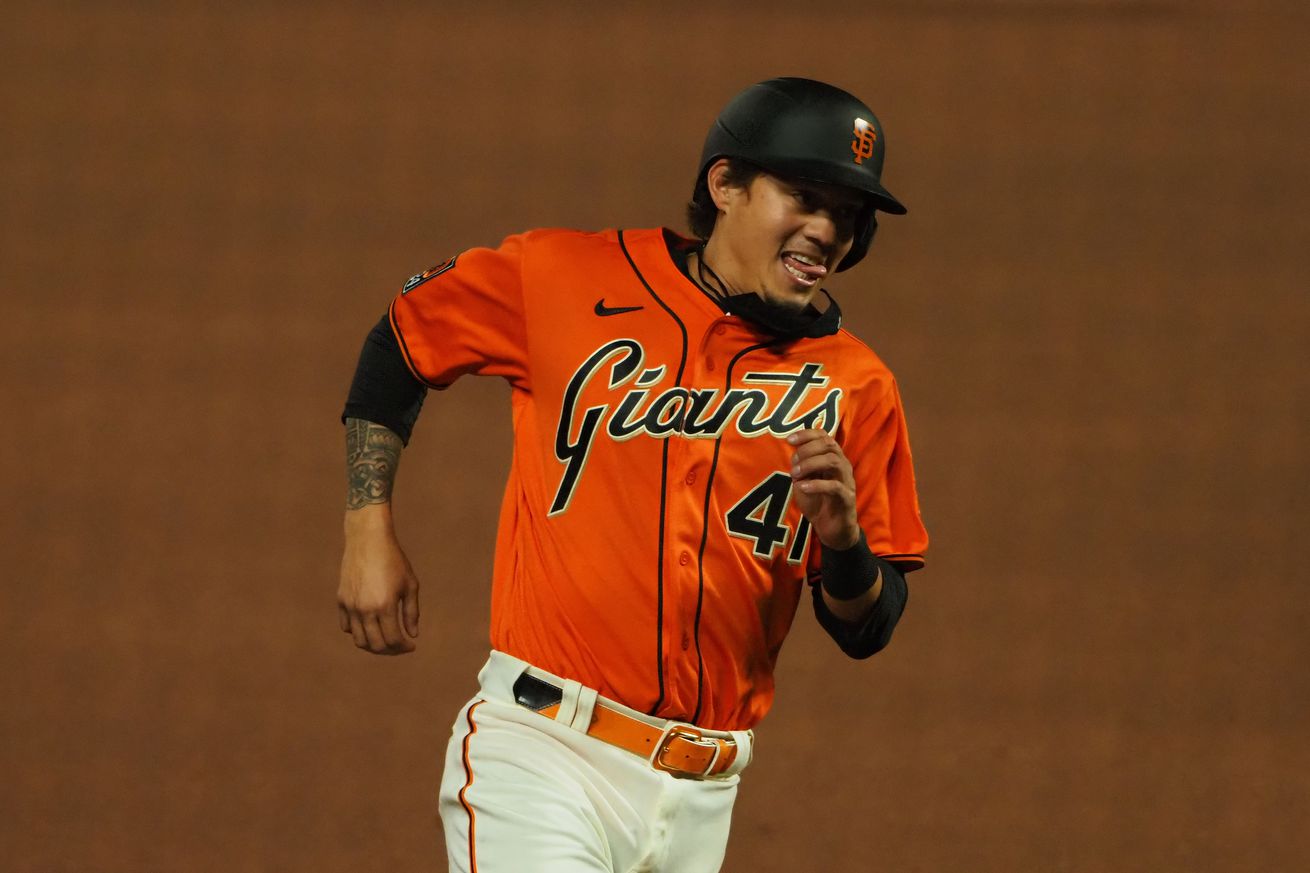 Hey, that was fun.

For the first time all season, the San Francisco Giants looked like a good baseball team.

Is that to say that they are a good baseball team? Goodness no.

But in the two wins agains the Los Angeles Dodgers, they didn’t actually look like the better team. The looked like the worse team that sequenced things together in a more handy manner. In the win against the San Diego Padres, the Giants wet the bed, then furiously blow-dried it and hoped we’d forget they wet it in the first place.

It didn’t look that way for the whole game, but it did settle into it quickly. Shin-Soo Choo hit an opposite field dinger on the first pitch of the game, and Logan Webb walked two more batters in the inning. You were scared. “Here we go again,” you thought.

But it was a false alarm. The Giants got the run back in the second inning, and while they briefly fell behind 2-1, they rattled off eight consecutive runs to make it look easy.

They can’t all be like that. The Giants don’t have the talent to pull that off. Every team wins a handful of games where they simply look good, but if the Giants only win those games, they’ll finish outside of the playoff picture. They need those games against the Dodgers that leave you thinking, “Wow, they probably shouldn’t have won that. Cool!”

But when the games come around where they look the part? They’re fun. Especially on a Friday night.

The party started in the fifth inning, and it started in the happiest way possible: with a first career knock. Chadwick Tromp lined an opposite field single for his first hit as a big leaguer, and the rally was on.

Mauricio Dubón followed it up with a single, which was a nice sight, and after Austin Slater lined out, Wilmer Flores did this:

Wilmer Flores will be there for you.
#OrangeFriday | #SFGiants pic.twitter.com/33j0ikzCZK

The ballpark is playing small, and Flores was able to take advantage of it with a pivotal blast.

But Tromp wasn’t happy just having a token first career hit. The very next inning, after Darin Ruf drew a two-out walk, Tromp brought him home with a double.

Tromp having himself a night pic.twitter.com/poQVbHYtMC

Tromp then scored on another single by Dubón which, again, made for a nice sight.

Those final three batters in the lineup — Ruf, Tromp, and Dubón — combined to hit 6-10 with 2 walks and 5 RBI. That’s a pretty nice formula for success.

While Dubón was able to take a step towards breaking out of his funk, it was another donut for Hunter Pence, who went 0-4 with 2 strikeouts, bringing his season total to 0-22. But his poor play was compounded by poor luck in this particular case, as a ground out in the first inning left his bat at 104.5 mph, with an expected batting average of .610.

In a game with 17 hits, and eight extra-base hits, Pence had the ball with the fourth-highest exit velocity, and ninth-highest expected batting average.

Logan Webb’s second start mirrored his first, which is to say he didn’t have his stuff but managed to limit the damage regardless.

He went just 3.2 innings, and gave up 4 hits, 4 walks, and 1 hit batter, while striking out just 4 of the 20 hitters he faced. He seemed to have a very hard time figuring out where the ball was going. But he held the Rangers to 2 runs, and just 1 earned run, and he deserves credit for that.

The bullpen, which has been weak for much of the year, was stellar. Conner Menez took over after Webb walked the bases loaded, and got out of the jam on one pitch. He, Shaun Anderson, Wandy Peralta, and Tony Watson proceeded to no-hit the Rangers until the ninth inning, when Sam Selman took over.

On the bullpen note, it’s abundantly clear that the Giants don’t trust Watson right now. I wrote on Friday morning about Watson, and how he’d only made one appearance all year. It’s now two appearances, but being given the ball for the eighth inning of a game you lead by seven runs doesn’t exactly exude confidence from the decision makers.

We’re eight games into the season and Watson has yet to be given the ball in a medium-leverage situation, let alone a high-leverage one.

It’s important to be responsible in these times which, I’m not sure if you’ve heard, are “uncertain” and “trying.” One good thing to do is socially distance, like Pablo Sandoval.

The newest member of the Rat Pack pic.twitter.com/whM0KD0r8u

Another thing to do is wear mask, like this unidentified orange blob who is employed by the Giants.

Yastrzemski and Donovan Solano have been the unquestioned stars of the season for the Giants, and while they weren’t Friday’s heroes, they both had good games. Starting against a lefty, Baby Yaz went 1-3 with a walk, a stolen base, and a double (which would have been a triple if not for an unlucky bounce over the fence). Donnie Barrels was 1-4 with an RBI.

The Giants have returned to .500, and they’re in prime position to win their first series of the year, if baseball survives that long.