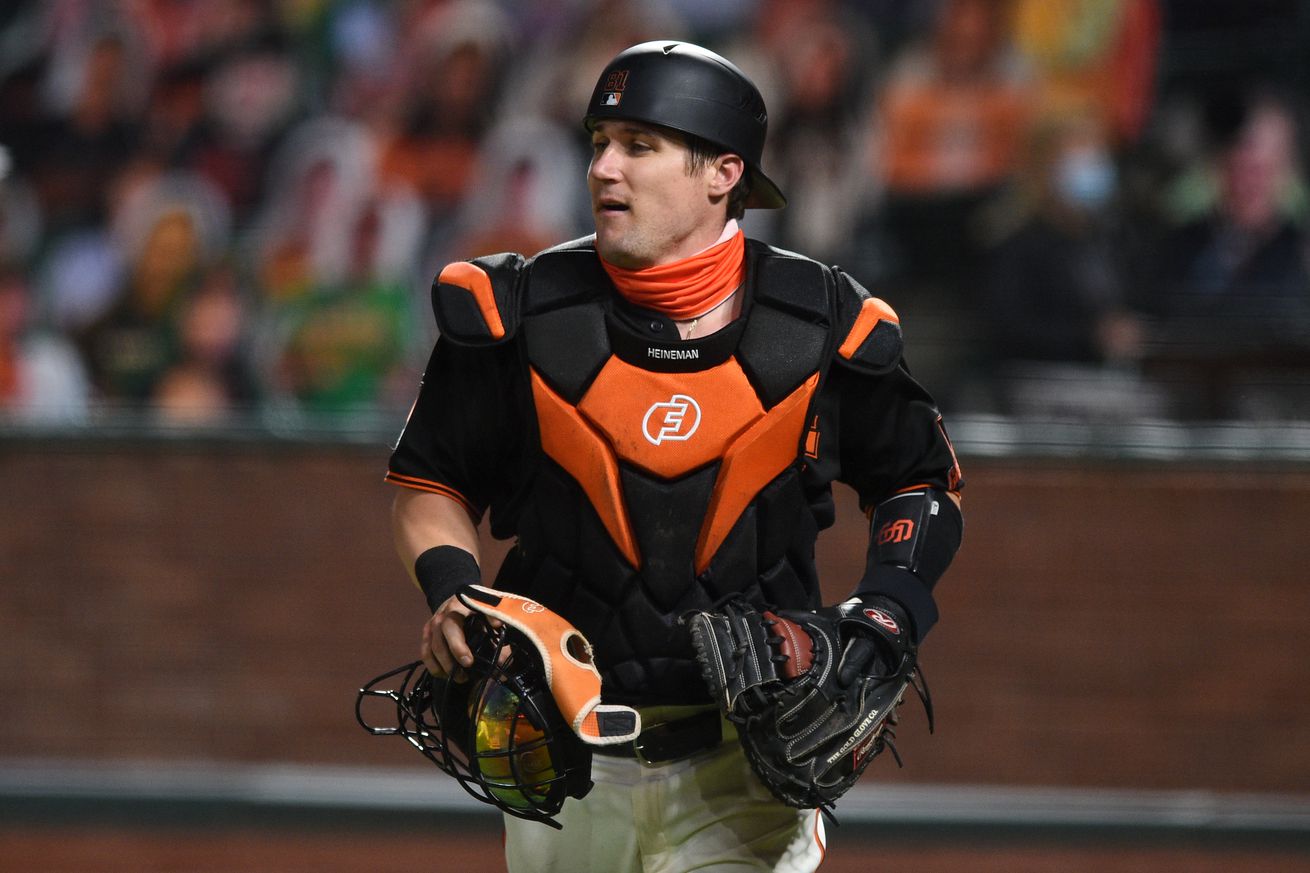 Next up on the San Francisco Giants season reviews is switch-hitting catcher Tyler Heineman.

Status throughout the season

Heineman made the Opening Day roster, and was optioned on Aug. 20 when Joey Bart was called up. He was recalled on Sept. 22 when Chadwick Tromp was placed on the Injured List, and stayed on the roster for the final few days of the season.

It was something of an odd year for Heineman. The Giants signed him to a Minor League contract in the offseason, and he was set to compete with Rob Brantly for right to back up Buster Posey. Then the season was suspended, Posey opted out of the truncated season, and suddenly Heineman and Brantly were left to compete for a starting job, while Bart and Tromp tried to force their way into the discussion.

Heineman won that battle with Brantly, and opened the season as something closely approximating an everyday catcher. And things went well out of the gates, as he racked up hits in each of his first games.

But when Tromp was healthy he replaced Brantly on the roster, and started to get the bulk of the starts. Heineman moved back towards the backup catcher role he was initially pegged for, starting every few days. The bat cooled off significantly as the playing time waned, and he eventually made way for Bart when the time came.

There was nothing notable about Heineman’s year behind the dish, but backup catchers are sometimes like umpires, in that the less you notice them the better. Heineman did nothing exciting with the bat or glove, but he was decently strong defensively. The Giants catchers did a tremendous job stealing strikes for their pitchers, and Heineman was a huge part of that.

Right now, no team has gotten more balls called strikes than the Giants. 88 for the Giants, compared to 52 for the Nationals.

Offensively, Heineman was bad, but when you’re a backup at the most offensively weak position in baseball, that’s kind of to be expected. A bad but competitive bat (his strikeout rate was just 12%) with a good glove is a perfectly fine thing from a backup catcher.

But while the bat and glove may not have been exciting, the arm was. Yes, Heineman is the 2020 recipient of the Giants Position Player Who Pitched Award, and he made Pablo Sandoval proud. After Sandoval’s scoreless appearances on the mound in 2018 and 2019, Heineman was the one called on this year, and he tossed a scoreless inning against the Oakland A’s.

What Giants position player will keep the tradition going and toss a scoreless inning in 2021? Well, I think I just found myself an article idea…

Heineman is a long way from free agency, and I expect him to be at Spring Training unless they can find a semi-interesting trade for him.

That said, he faces an uphill battle to win the role that was projected for him in 2020. Bart has arrived (even if he’ll likely start 2021 in Sacramento), Tromp was intriguing, and Aramis Garcia will be healthy. And Farhan Zaidi has already said the team will consider adding a veteran catcher in free agency.

The most likely outcome seems to be that Heineman spends the year in Sacramento as an emergency option.

I think it’s best to think of Heineman not as the Opening Day starter that he was, but rather as the backup catcher that he was signed to be. And viewed through that lens, he was totally fine this year.