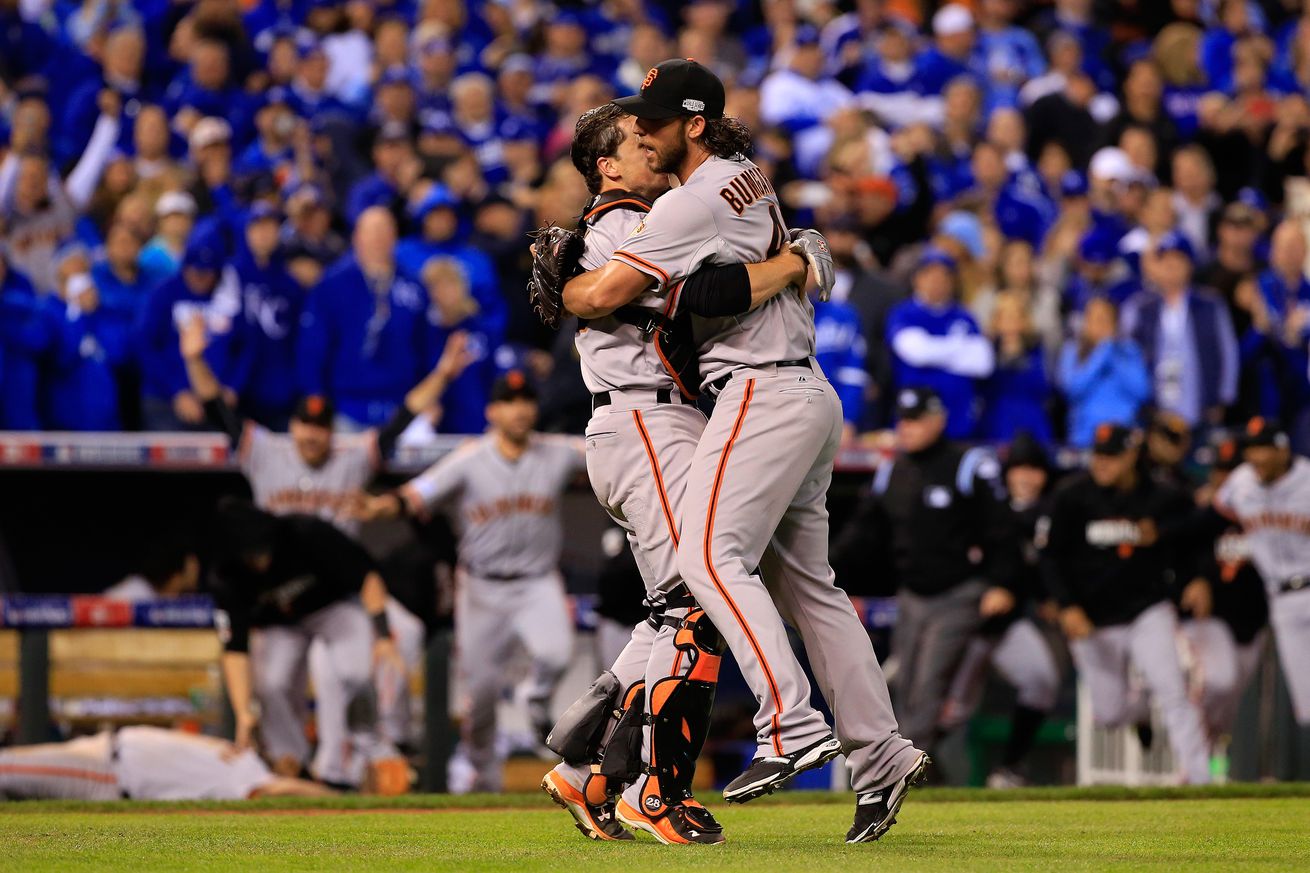 By the numbers, the Giants had a complicated decade. There’s an argument to be made that they were the best team of the last 10 years. On top of the three World Series, the Giants brought up a future Hall of Fame catcher who won a Rookie of the Year and an MVP award. Their pitchers combined for three no-hitters, a perfect game, and two All-Star starts. Few teams from the 10’s can even compare to the Giants’ resumé. Those numbers should be the only numbers you need to know the Giants’ story.

The issue is that all of those accomplishments came in the first half. The second half was less memorable. From 2015 on, the Giants went 385-425 and have been one of the worst teams in baseball since the 2016 All-Star Break. This team went from a dynasty to just nasty and that has created both impressive and depressing stats as well as some plain weird ones which is fitting for a team whose rise was as unlikely as their fall.

So, here they are. The best, worst, and weirdest stats of the decade. Let’s get the worst out of the way first.

The Giants won three championships in large part because of their homegrown core. In the aughts, the Giants drafted Matt Cain, Tim Lincecum, Buster Posey, Brandon Crawford, and Brandon Belt. For a time, the Giants could do no wrong when it came to drafting players, but as soon as 2010 rolled around, the Giants’ success disappeared. From 2010-2019, players the Giants drafted have combined for just 35.6 rWAR which is the worst by any team this decade. Below is a chart showing the combined rWAR of all players drafted by each team.

This includes players who ultimately didn’t sign or players that team later traded. The purpose of including that is to show just how adept a team is at identifying talent in the draft. The Blue Jays come out on top because they initially drafted Kris Bryant, Aaron Nola, and Noah Syndergaard even though Bryant and Nola didn’t sign and the Jays traded Syndergaard to the Mets. If you don’t think that reflects well on the Blue Jays, consider that the Giants never even had a chance to deal away a player as good as Syndergaard.

The five best players the Giants drafted over the last ten years are:

You’ll notice that Duffy, Duvall, Reynolds, and Hembree spent most or all of their careers playing for another team. It’s tempting to dunk on Brian Sabean and Bobby Evans for trading away the only worthwhile players they drafted, but even if they had held onto them all, those players wouldn’t have made the Giants into a contender.

This should also put to rest any notion that the Giants are bad because they spent heavily on extending players and free agents. They’ve gotten almost no help from the draft, so think about how bad they would be if they didn’t spend. They’d basically be the Tigers without Matt Boyd.

34 Opposite Field Homers by Right-Handed Hitters at Oracle

We talk a lot about how Oracle is the most difficult park to hit home runs. It comes as no surprise that the Giants were dead last in total homers hit this decade. Most of the attention gets placed upon lefties who have to contend with the Willie Mays wall and Triples Alley, but I don’t think we talk enough about how Oracle almost completely removes a righty’s ability to go oppo.

Baseball Savant has pitch tracking data going back to 2008, and since then, there have only been 34 home runs hit to the opposite field by right-handed hitters. To put that in perspective, there were 39 oppo shots by righties at Comerica Park, Minute Maid Park, and 68 at Yankee Stadium just in 2019. There were a whopping seven hit at Oracle Park this year, which is the most we’ve seen in a season since 2008, but there were four hit in the three Mexico series, three in London, and two in Japan. That’s two more than Oracle in 71 fewer games. To further hammer it home, here’s a chart showing how many times righties have gone out to the opposite field at every venue since 2008.*

*I know it’s supposed to be an “of the Decade” article, but it’s only two more years, and it makes the data more complete.

Of course, this includes visiting players so it’s not just the Giants’ lack of power and right-handed bats in general. You might notice that SunTrust Park has a narrow lead on Oracle Park, but remember that SunTrust opened in 2017. Even Turner Field passed up Oracle in fewer years.

One of my favorite hobbies is to impose Brandon Belt’s fly ball spray chart onto home run friendly fields, but I’ve never done it with Buster Posey who is a right-handed hitter with an opposite field approach. I know the dots on the spray charts aren’t completely accurate, but if Buster Posey played his entire career at Yankee Stadium, he’d have approximately 316 more home runs.

I’m sure you’re aware that Madison Bumgarner’s 0.25 ERA in the World Series is a record. Some of you might even have that number tattooed on your body. What you might not know is that Madison Bumgarner best starting pitcher in postseason history by championship win probability added, and the second-best player overall. Bumgarner is the clear leader for the decade in this category, but what he has done transcends arbitrary end points.

cWPA, kept by Dan Hirsch at The Baseball Gauge, is like normal win probability added which tallies a player’s impact on their team’s chances of winning that baseball game except cWPA multiplies that number by the percentage change for winning the World Series.

In four different postseasons, Bumgarner has amassed 1.230 cWPA. Only Mariano Rivera has accumulated more cWPA and as a closer for the Yankees, Rivera got a million prime opportunities to rack it up.

As far as individual postseasons go, Bumgarner’s 2014 ranks third all-time in cWPA at .917. He trails only Jack Morris in 1991 (.935) and Ralph Terry (.994). Morris’s performance was good enough to get him into the Hall of Fame. I suspect that Hall of Fame voters won’t be as swayed by a handful of starts when Bumgarner reaches eligibility in 15 years or so, but depending on what the second half of Bumgarner’s career looks like, it might be enough to push him over the top.

I sorted through every stat on the FanGraphs leaderboard and HR/FB was the only category where a Giant came out on top. In 2011, Matt Cain was MATT CAIN mostly because he kept the ball in the yard at an astonishing rate. His 3.7 percent HR/FB percentage wasn’t just the lowest of the decade, it was the lowest mark in the years that FanGraphs has batted ball data available (since 2002). With the ball as lively as it is, it’s hard to see a qualified starter slipping under 3.7. Only Trevor Bauer and Jacob deGrom have come close. In 2018, the pair posted a 6.2 and 6.3 mark respectively.

In 2011, Cain allowed just 9 homers in 221 2/3 innings. After watching the juiced ball for the last five years, those look like numbers from before World War I. There was only one pitcher to throw that many innings in 2019. That would be Justin Verlander who gave up 36 home runs and won the Cy Young Award. But Matt Cain’s home run suppression wasn’t that much better than other pitchers in that era. (Yes, it feels weird referring to something that happened eight years ago as belonging to a different era, but I think it’s appropriate given the stark difference in statistical standards.) Cain was only slightly ahead of 2014 Garrett Richards on the all-time list, but until the ball is deadened, Cain will hold this obscure lead for the foreseeable future.

Buster Posey: Catcher of the Decade

Next closest is Yadier Molina at 41.7

Posey may have had to deal with a park that destroys his power, but Posey was still the best catcher of the decade. He was the only catcher to win an MVP or a Rookie of the Year, and he did both. He also had a commanding lead in fWAR. Posey’s 53.0 wins above replacement trounced Yadier Molina’s 41.7. Posey is a perfect catcher. For the last 10 years, he has hit like Joe Mauer, framed like Johnathan Lucroy, and thrown out runners like Yadier Molina. Here’s how Posey ranks among catchers from 2010-2019:

Posey hasn’t just been the best catcher of the decade, he has also been the best non-Mike Trout position player. Trout is the only position player ahead of Posey by fWAR, and it’s uh, not especially close between Posey and Trout. No one can compare to Mike Trout, though. Not even Buster Posey, who is otherwise perfect.

Just look at this obligatory GIF of him banishing Mat Latos to the shadow realm.