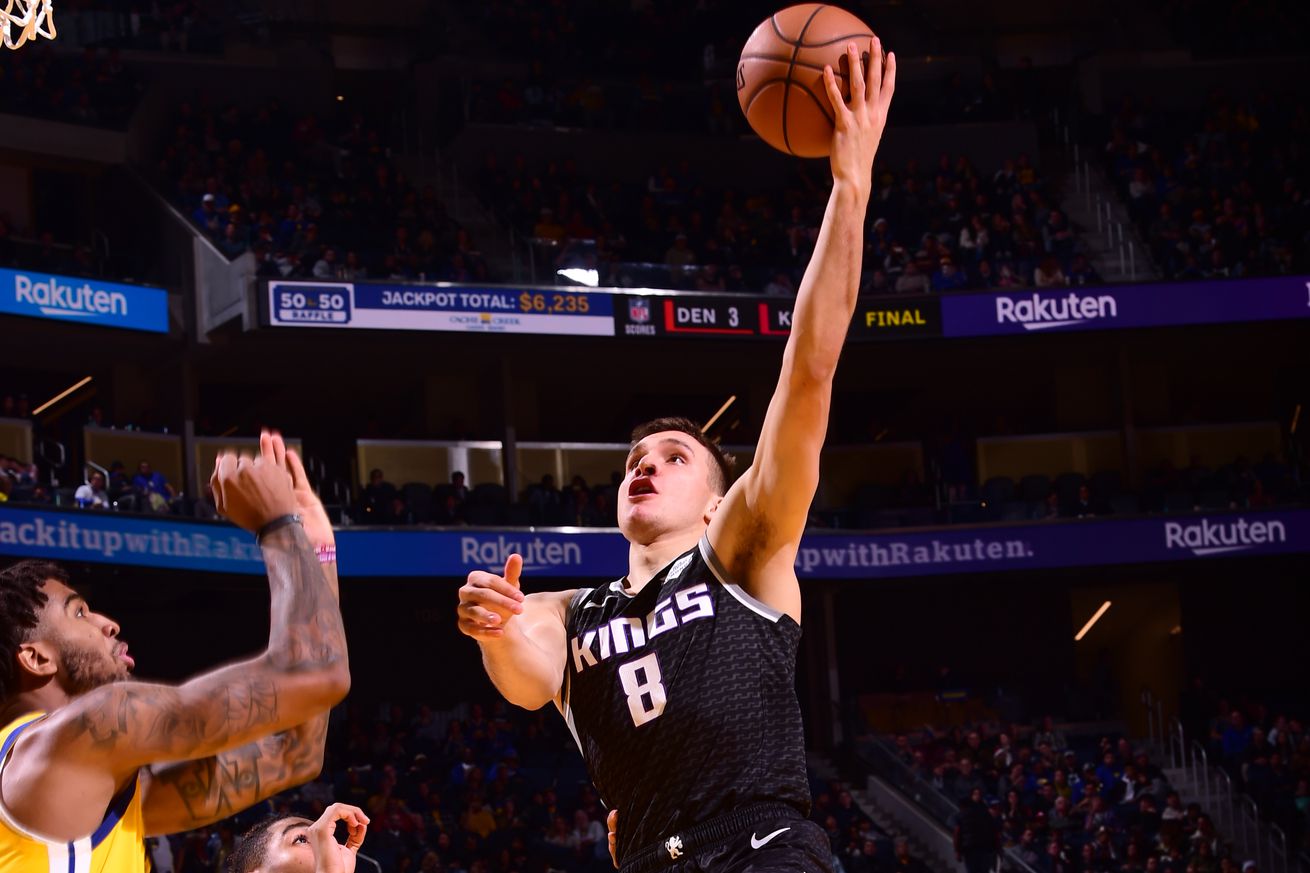 Despite committing 29 turnovers, the Kings handled business in San Francisco

Apple? Cherry? Apricot? Raspberry? Strawberry? Take a pick of any flavor, because Sunday’s night’s undisciplined contest provided a smorgasbord of turnovers for anyone watching the game. The Sacramento Kings defeated the floundering Golden State Warriors 100-79, despite turning the ball over 29 times, the most in any Sacramento-era win, while the home team managed to chip in 20 of their own. Golden State took advantage of early mistakes and careless play and hung around for the entirety of the first half, but a third quarter surge put the Kings comfortably in the lead midway through the third quarter, and Luke Walton’s squad never look back. Bogdan Bogdanovic led all scorers with 25 points, along with 5 rebounds, 5 assists, and 6 turnovers, while Willie Cauley-Stein recorded 14 points, 5 rebounds, and 6 steals for the Warriors.

Player of the Game

Envision the worst, most unpleasant 24 minutes of basketball that your mind could ever conjure up under the worst of circumstances. Now, take that nightmare of a half and add four million turnovers, a Draymond Green layup that missed worse than a Pete D’Alessandro draft pick, and five Willie Cauley-Stein steals, and you’ve just begun to experience the pain of the first 24 minutes on Sunday evening. Sacramento actually shot the ball well from the field, knocking down 59.4% of their shots compared to Golden State’s 43.2%, but no one on the Kings bothered to take care of the rock. The game log from the 9:46 to the 7:30 mark of the second quarter, when the Kings held a 36-20 lead, serves as a perfect example for the evening: Marvin Bagley lost ball turnover, Trevor Ariza offensive foul, Bogdan Bogdanovic lost ball turnover, Richaun Holmes offensive foul, Trevor Ariza bad pass turnover. That foolishness with the ball allowed the worst team in the league to enjoy a 12-0 run, reducing their deficit to just four points. The Warriors were slightly mores disciplined than the Kings in the first half, turning it over a total of 11 times to Sacramento’s 14. From a slightly more positive perspective, Buddy Hield led all scorers with 14 points on just 8 shots, and Marvin Bagley and Bogdan Bogdanovic chipped in 10 of their own, while Alec Burks and Damien Lee both recorded 10 points for Golden State. Despite their poor play, the Kings managed to take a 51-42 lead into the half.

Nemanja Bjelica was kind enough to continue the theme of the evening by immediately throwing the ball to the Warriors to open the second half, prompting Luke Walton to call a timeout 33 seconds into the third quarter. That pause seemed to finally wake the Kings, as they used their superior talent and defensive pressure to build a 23 point advantage with 4:42 remaining in the period. Sacramento’s lead never dropped below 17 points from that point on, at one point extending to 25 points, and Bogdan Bogdanovic, Richaun Holmes, and Harrison Barnes worked to put the Warriors to bed. The Kings outscored their Northern California rival 49-37 in the second half, and ultimately won the game 100-79.