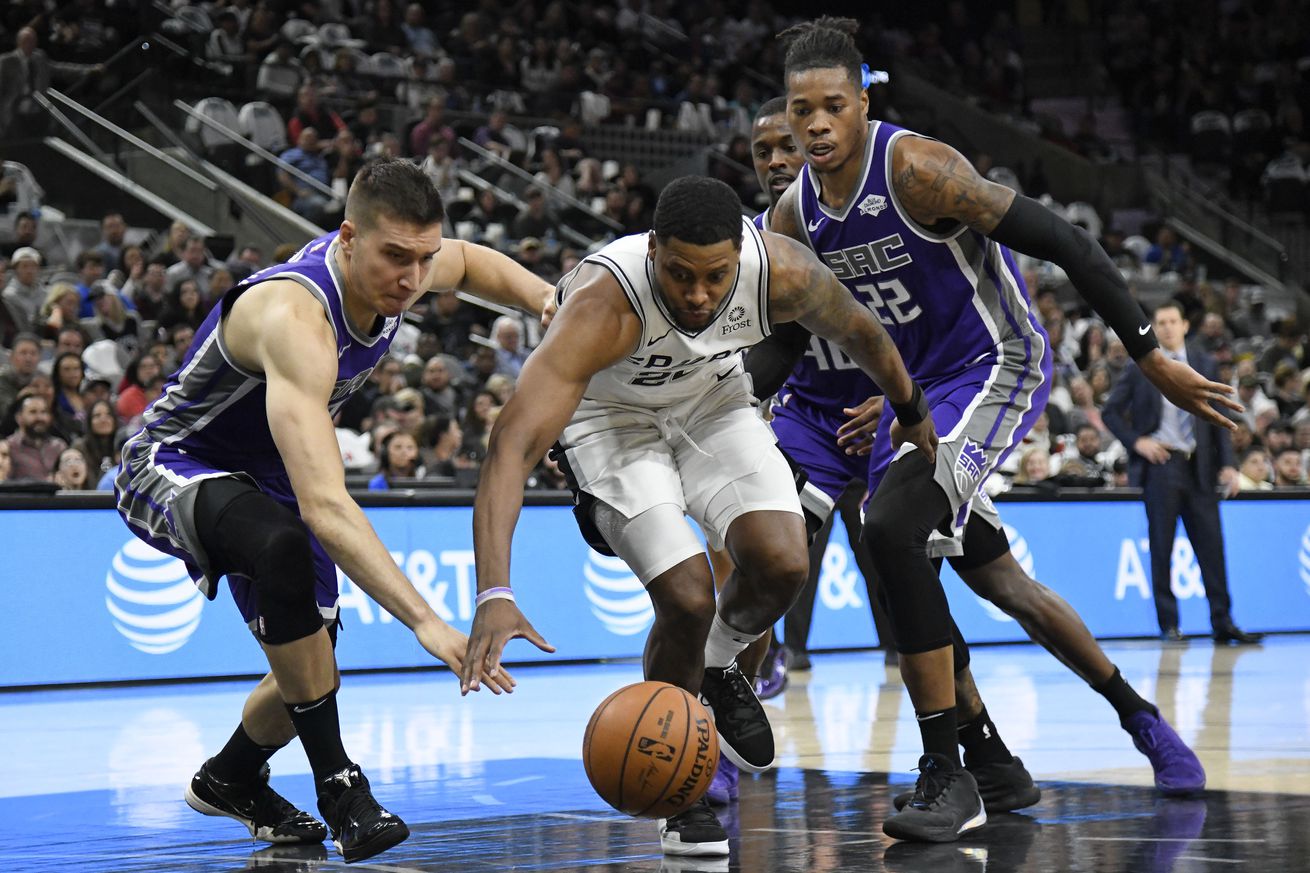 A nailbiter that went to overtime

A wild second game of the road trip went to overtime as the Kings had some late blunders to give the Spurs a chance to win. The Kings were up 98-89 with 1:43 left in the fourth. Both teams struggled to hit shots for most of the game until the fourth quarter when each team exchanged run after run that went to the final buzzer. The Kings got stops on defense in overtime but had some questionable execution on offense capped off by not being able to score on multiple opportunities at the buzzer.

The first quarter was a low scoring affair for both teams as the Spurs lead the Kings just 21-17. The Kings could not buy a three pointer to save their life, but Trevor Ariza finally made one to end the drought. Richaun Holmes made shots down low and Bogdan Bogdanovic got some nice baskets but Buddy Hield started off struggling again. He’s been in a slump for quite some time and could not make anything, even if they were wide open. The Spurs weren’t so great either as they missed good looks from three, but Demar DeRozan, out of all players, hit one. Not a great start for the Kings.

The second quarter started off going all San Antonio’s way as they slowly went up to a 28-19 lead, but the Kings responded on a 10-0 run led by Yogi Ferrell. Hield finally hit his first three after pump faking and losing the defender for an open look. The game was deadlocked with both teams stuck in the 30 point range for much of the quarter until the Spurs got some momentum with Marco Bellinelli and DeRozan knocking down threes. The Kings were still in it despite going almost six minutes without a field goal. Bogi hit a contested three and Holmes mopped up on some baskets. Sacramento trailed going into the second half after a really poor offensive showing. Holmes, Ariza and Ferrell were the top players and it just shows how depleted the Kings are.

Sacramento started the third on a 13-5 run going 3-4 from deep and cut the lead to two. The Spurs had the lead for a bit longer until Yogi brought some momentum, cutting off a pass intended to DeRozan and then scoring the other way on a tough layup. Ariza banged in another three and Barnes scored on iso plays as the Kings had a 15-5 run to end the quarter and took a 72-69 lead to end the quarter. Sacramento outscored the Spurs 30-17 as well.

The fourth quarter was filled with run after run. One team would score seven points, a timeout was taken, then the other responds to tie up the game. This back and forth action lasted throughout the entire quarter until the Kings had a solid late lead, but gave away the ball on two blunders to let the Spurs get a chance. With a 100-97 lead, the Kings just couldn’t let the Spurs shoot a three but that’s exactly what they did. Belinelli drained the wide open three to send it to overtime as Hield fell asleep on defense and reacted too late.

The Kings had two stops on defense to start overtime but both offensive possessions led to Cory Joseph shots which you can’t do in those situations. The Spurs didn’t even score a basket in the period until Dejounte Murray finally had a positive in the five minutes to give his team a 105-104 lead. Sacramento had so many chances to win the game in the final seconds but missed all of them and drop another.

Harrison Barnes started the game off very slow as he wasn’t able to hit his shots, but provided offense by drawing fouls and hitting free throws. Later in the game, he became the focal point of the offense and delivered but didn’t touch the ball often in overtime. He finished with 21 points on 6-14 shooting (9-11 from the stripe), 10 rebounds and five assists.

Richaun Holmes had a nice shooting game going 6-9 and filled the stat sheet as well. He had 13 points, 14 rebounds, five assists, three steals and two blocks. They probably aren’t in this game early on without his production.

Yogi Ferrell was phenomenal in regulation given the context of the point guard situation. He was the spark off the bench with 17 points on 6-11 shooting, 5-5 from the line, three assists and a steal. He didn’t play in crunch time.

Buddy Hield had another off night shooting but did make some timely baskets. However, the most important one missed. He had 23 points on 10-27 shooting (3-11 from three), seven rebounds and a block.

Both teams grabbed 52 rebounds, but the Spurs had more assists at 25-19.

The Kings’ record away from home is now 3-9.

The Kings go to Dallas next to take on the 15-6 Mavericks, currently the #2 seed in the West. Tipoff is Sunday at 4:00 p.m. PST. The Mavs will be on a back-to-back as they face the New Orleans Pelicans on Saturday.