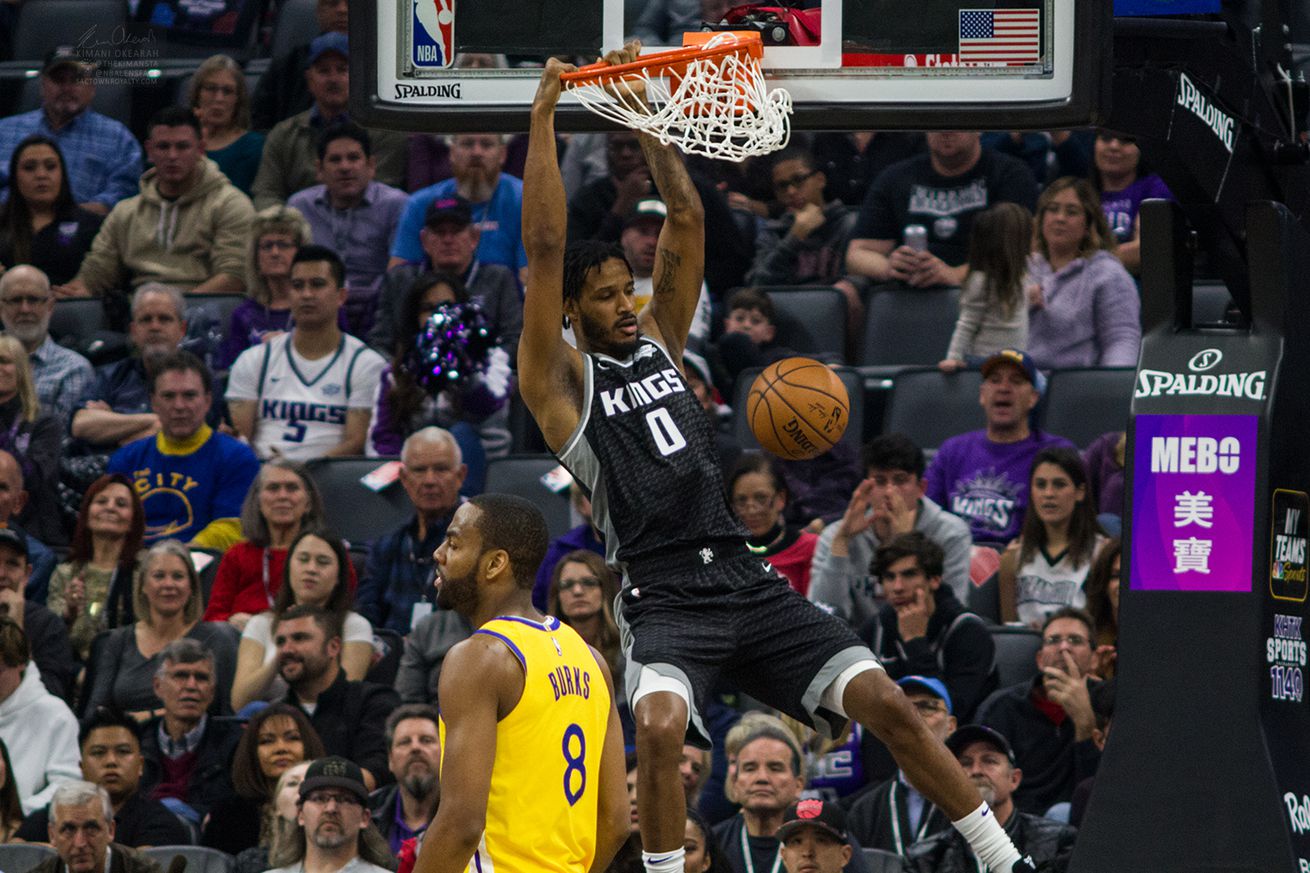 Not as fun as last year’s matchups but a win nonetheless!

The final score doesn’t do the game justice, as the Sacramento Kings thoroughly beat down a bad Golden State team where the Kings were finally able to clear out the bench and give those guys some run. The Warriors made some plays to end the game, but otherwise they were very poor. Trevor Ariza stepped up big time off the bench and once he got going early, the lead grew and the Kings didn’t have to check the rear view mirror much. Good start to a SEGABABA and they now have a 14-23 record.

Injury notes: Marvin Bagley (left foot) is OUT. Bogdan Bogdanovic (sick of the rumors) (flu) is OUT. Dewayne Dedmon (CD) is INACTIVE. D’Angelo Russell (shoulder) OUT, Kevon Looney (abdomen) OUT, Draymond Green (ankle) is OUT.

Pretty hilarious start for Willie Cauley-Stein. He fails to catch the ball for a turnover, then blocks Buddy Hield. Attempts a shot over Richaun Holmes and got blocked, but dove for a loose ball that led to a fast break layup. The next possession he jumped the lane and got a fast break dunk. Buddy Hield made his first three and it came from a pass from De’Aaron Fox. Trevor Ariza and Harry Giles were the first players off the bench so it’s good to see Giles getting more involved in the rotation. The Warriors shot 7-20 from the field but the Kings didn’t capitalize too much on that. However, they led 26-19 after one because the Warriors are bad. All starters besides Nemanja Bjelica were tied with five points.

Ariza made some good plays in the first and then pulled out the euro but was fouled. He missed both free throws but made up for it by jumping the lane and laying it in. A possession later he drilled a three from Fox and followed it up with another three! Kings led 36-22. There some slow possessions where each team traded baskets and one saw Barnes swish a three. Steve Kerr was ejected after getting back-to-back technicals. Buddy missed a free throw though. The Kings led 52-40 to end the half. Ariza’s 12 points on 5-7 shooting led the way following 10 points each from Fox and Barnes. Eric Paschall, the exciting rookie for Golden State, led them with eight points on 4-5 shooting. Golden State shot 0-13 from deep.

Alec Burks opened the quarter missing a shot, reminiscent of his time with Sacramento. Buddy drilled a three on an inbounds pass. Barnes and Buddy later made back-to-back threes that extended the lead to 20, as the scoreboard read 62-42. But of course, Richaun Holmes seemed to hurt his shoulder and left to the locker room wincing with a minimal range of motion. Ariza hit another three to push the lead to 73-47. Giles then found a cutting Buddy for a dunk. Giles hit Cory Joseph to the outside, who pump faked and hit a three to make the lead 81-52 and then 85-55. Wenyen Gabriel had to come in as Bjelica picked up his fourth foul. Holmes was ruled out with a right shoulder strain. Three solid quarters and the Kings led 91-64. Hield’s 21 points on 4-9 three point shooting led the way.

The Kings still had Fox and Barnes out there to start. Golden State got on a 10-2 run to give them some hope. A once 31 point lead became 20. Fox got up to nine points in the quarter but did have some careless turnovers. Luke Walton cleared out the bench to end the game. The final score was 111-98.

Trevor Ariza made a big impact off the bench and it was timely considering how poor the bench is without sixth man Bogi. Ariza ended the game with 18 points in 32 minutes on 7-9 shooting with 4-6 coming from deep along with six rebounds, three assists and two steals.

Buddy Hield has been shooting from deep a lot better as of late. He still misses some really badly but it’s a good sign. He finished with 21 points on 7-17 shooting overall and 4-10 from three along with five assists, two rebounds and a steal.

De’Aaron Fox questionably played seven minutes in the fourth quarter and it was a blowout, so his stats could seem a bit inflated to some. He finished with 21 points as well on 7-14 shooting and went 7-8 from the stripe. He added seven assists, four rebounds, one steal and one block.

Harrison Barnes as a complimentary role player gives you good minutes. Barnes went for 18 points on 6-12 shooting overall and 3-5 from three displaying a lightning quick release. He added four rebounds, two assists and a steal.

Both teams had 44 rebounds but the Kings had more assists at 27 to 19.

The Kings had 23 turnovers. For some reason, they love to give the ball away all the time to the Warriors but they’re bad enough to not make it matter.

Sacramento had 13 fast break points and 46 points in the paint.

It’s a SEGABABA as the Kings head to Phoenix to take on the Suns at 6:00 p.m. PST. The Suns will be coming off a loss to the Memphis Grizzlies, but they have an extra day off.