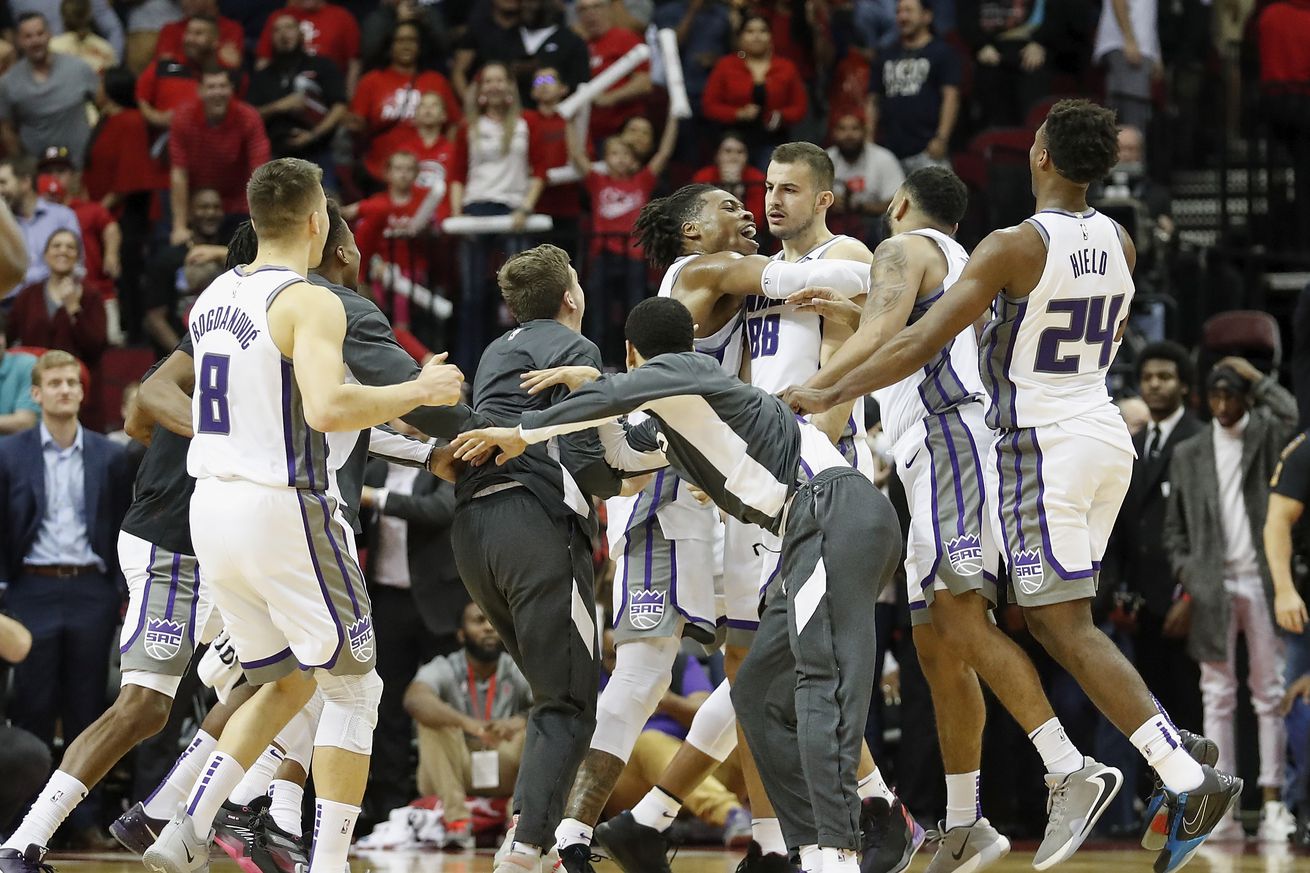 What a DANDY! On the second night of a back-to-back, and the third game in four nights, down two of their most important players, the Sacramento Kings walked into Houston and snatched an important win from the Rockets off of a Nemanja Bjelica buzzer beating three-pointer with no time remaining. Buddy Hield led the Kings with 26 points, while Russell Westbrook and James Harden combined for 61, but it was Sacramento’s balanced attack and disciplined defensive game plan that led to a victory.

Play of the Game

Player of the Game

While the play of the game undoubtedly belongs to Nemanja Bjelica, the Kings would have never been in that position to win the game without the stellar defense of Cory Joseph. He was given the James Harden assignment most of the evening, and though Harden’s counting numbers look impressive at first glance (27 points, 4 rebounds, 10 assists), he also committed 8 turnovers and missed 7 of his 10 three-point attempts. Joseph was in his bag all night long.

Quote of the Game

“Fuck it. We deserve this win, man.” pic.twitter.com/piFJUBONQe

With Mike D’Antoni opting to go with a small-ball starting five, the Kings’ big men dominated the opening twelve minutes, with guards and wings regularly finding Nemanja Bjelica and Richaun Holmes in mismatches against the 6’5” P.J. Tucker. The duo scored 13 of Sacramento’s 24 points, as well as combining for six rebounds. On the defensive end of the floor, Cory Joseph, Harrison Barnes, and Trevor Ariza all took turns trying to slow down James Harden with some success, holding the league’s leading scorer to just six points on five field goal attempts. Russell Westbrook was the biggest thorn in Sacramento’s side, recording eight points on mostly layups, often blowing right by Buddy Hield in semi-transition opportunities. Despite Westbrook’s scoring, the Kings defended and disrupted their way to a 32-28 lead after the first quarter.

The second period was much more friendly to the home team, as the Rockets used a 16-3 run to pull in front of the Kings by 11 points, but back-to-back-to-back-to-back three-pointers, including a pair courtesy of Cory Joseph, brought the Kings right back within one point. Quite possibly the biggest ode to Sacramento’s continued defensive discipline was James Harden’s free throw total. Despite averaging 14.6 attempts per game on the season, the Kings allowed him just one shooting foul and two shots from the charity stripe through the first 24 minutes. Houston walked into halftime sporting a 64-59 lead, with Harden and Westbrook combining for 28 of those points. Sacramento leveraged a much more balanced attack, as five players scored between eight and ten points.

The third quarter was a back and forth affair, but two of the game’s three most important plays happened to close the period. With 44.1 seconds remaining and the Rockets up 91-89, James Harden pulled up for a heavily contested three-pointer. He made the shot and the whistle blew seconds later, initially to the ire of Kings fans everywhere. But the call was actually to Sacramento’s advantage, as Harden was called for an offensive foul for swiping down and across Cory Joseph’s face through his release. Mike D’Aantoni immediately challenged the foul, but after a few moments at the monitor, the call was confirmed. Three points were removed from Houston’s total. On the following play, Cory Joseph was awarded an and-one basket and knocked down the free throw, putting the Kings back in front by a point. Just six seconds later, Harden was again fouled on a made three-point attempt as Trevor Ariza swiped across his arms. Luke Walton, in his best D’Antoni impersonation, immediately threw the imaginary challenge flag. After several additional minutes of review, the officials determined that Ariza did in fact foul Harden, but that the foul was committed before the shot attempt. Because the Kings were in the penalty, Harden was granted two free throws with no three-pointer made, instead of one free-throw in addition to the long-ball. Between those two whistles, Sacramento saved five total points. After all of that chaos and a couple of made Harrison Barnes free throws in the closing seconds, the Kings led 94-93 at the end of three.

Similar to the third quarter, neither team could gain a significant advantage in the closing twelve minutes. The largest deficit on either end was five points, and the Rockets and Kings traded massive shot after massive shot after massive shot to end the game. With just over a minute remaining, Harrison Barnes was forced in a tough fadeaway three-pointer, but he knocked it in to give the Kings a 113-110 lead. Eight seconds later, the worst volume three-point shooter in NBA history, Russell Westbrook, sunk a long-ball of his own. The game was all tied up at 113. Barnes missed a floater on the following play and Richaun Holmes couldn’t quite get a tip-in to fall. Ben McLemore walked down the floor and hit his fourth three-pointer of the game to put the Rockets up 116-113, nearly finding revenge against his former club. Buddy Hield initially miss his own attempt from beyond the arc a few second later, but a Bogdan Bogdanovic offensive rebound granted Buddy another opportunity and he wasn’t going to miss twice. But as is the case with Hield, he immediately gave up a Westbrook layup with just one second left on the clock. And then it was Nemanja Bjelica’s time. Let’s watch that shot one more time, shall we?