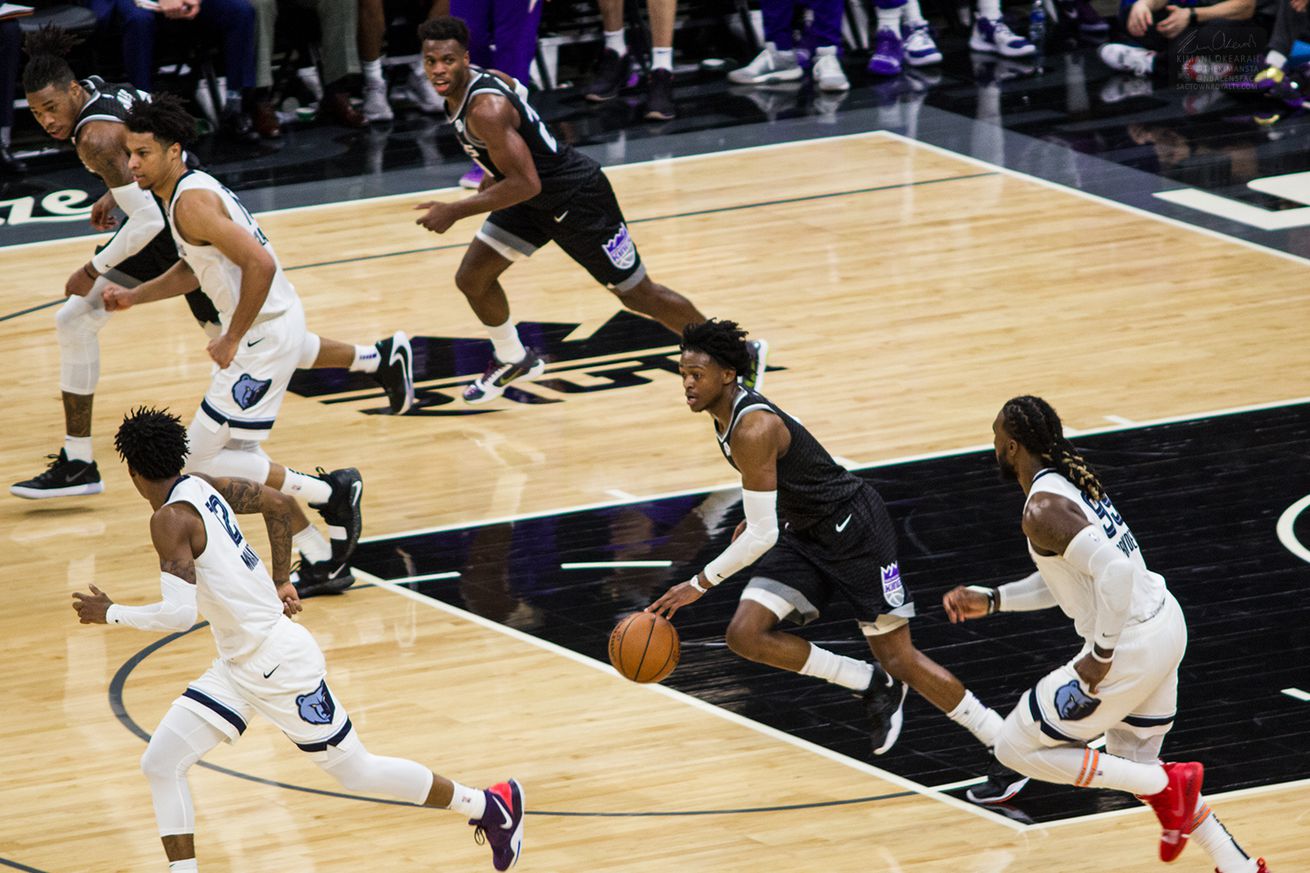 The Kings win! This feels good.

A win in any form is great and that’s how the Sacramento Kings will open 2020. It didn’t look like that would be the case when watching the first and third quarters. The Grizzlies were scoring with ease and the Kings didn’t have making shots on their New Years resolution, which is fair because nobody follows those anyways. However, they were superb in the second and fourth quarters and pulled out a win thanks to All-Star level performances from De’Aaron Fox, Buddy Hield and Richaun Holmes.

De’Aaron Fox opened the defense with a block on Jaren Jackson Jr. and Buddy Hield went the length of the floor for a layup. Buddy Hield made his first two threes of the game. One on an iso and one running and getting open. Dillon Brooks had the hot hand for Memphis scoring 10 of their 16 early on. Memphis went on a 10-0 run to lead 21-12, but Harrison Barnes hit a three to end the drought. Memphis continued to hit their threes but Richaun Holmes provided the daily dunk. The Kings trailed 40-21 with 1:32 left in the first on another 10-0 run. It would end 42-26 with Jackson Jr. leading with 14 points followed by Hield’s 12.

The second quarter started with some good looks not going down for the Kings, but Memphis stopped making every shot as well and that boded well for Sacramento. The Grizzlies held a 46-26 lead, but an 8-0 run sparked what was to come. Trevor Ariza and Cory Joseph hit very welcoming threes. The Kings then went on a huge run that lasted the entire quarter and completely flipped the game. Holmes’ energy on both ends generated the comeback as he scored on the fast break, somehow put in a basket surrounded by three defenders for the and-1 and got stops on defense. The Kings were getting turnover after turnover and for once, ran with it! They ended the half with 15 fast break points so no wonder they grabbed a 63-60 lead at the half. Holmes had 15 points on 6-9 shooting to lead Sacramento.

Barnes got to the rim and scored and Fox received a lucky bounce on a corner three. There were some possessions where Buddy was the primary ball handler and it didn’t work. Not a fan of those types of plays. Get Buddy in catch and shoot positions where he’s running off the ball. The Buddy ball handling possessions continued and it still didn’t work. Memphis tied it up 74-74. Barnes, Bjelica and Buddy hit back-to-back-to-back threes. Grant Napear said Jae Crowder was having a quiet game and Crowder put up 10 points in the quarter and Memphis led 90-86. Well Bogi drilled a three but it was wiped away due to Harry Giles running right into the shot contestor. Memphis went on another big run and led 97-90 to end the quarter. Hield led the Kings with 18 points, followed by Fox and Holmes with 17.

Giles definitely made an impact to start the fourth despite playing with four fouls and got his fifth in this little run. He got the ball in the high post and found a cutting Bogi on multiple occasions. Easy baskets and Bogi had eight in a row for the Kings who were able to take a lead. The game had some back and forth action and Fox became aggressive which led to baskets at the rim. It came down to the free throw game and the Kings win it!

Make no mistake, this was an All-Star caliber performance by De’Aaron Fox. The third year guard is extremely difficult to stop when he’s aggressive and that was surely the case today. He finished with 27 points, nine assists, four rebounds, five steals and two blocks. He went 8-8 from the free throw line.

Buddy Hield complimented Fox in the way he’s meant to do, finishing with 26 points, 5-9 from three, seven rebounds, three assists and a block.

Richaun Holmes played through foul trouble and did still great, going for 18 points on 7-10 shooting, seven rebounds and two blocks.

Harrison Barnes had a quite, yet complimentary game. He had 17 points on 6-10 shooting, three assists, one rebound and a block.

Bogdan Bogdanovic put up 16 points on 7-15 shooting, two rebounds and two assists but left the game with what looked like an ankle injury. He limped pretty badly into the locker room.

Each team had 23 fast break points. That jump was huge for the Kings as they played way better when they ran. Not surprising

The Kings made a 20 point comeback and that got easily lost with everything that went on in the game.

The Kings host the New Orleans Pelicans on Saturday at 7:00 p.m. PST. The Pelicans will be on a SEGABABA as they play the Los Angeles Lakers tomorrow.