11:33am: Metu’s deal is for three years, meaning the Kings used some of their mid-level exception to complete the signing, tweets Jones. 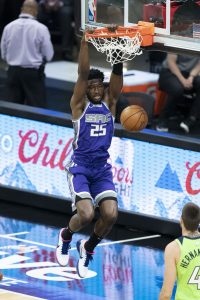 Metu received about $700K for the rest of the season, according to ESPN’s Bobby Marks, who tweets that the following two years are non-guaranteed.

11:17am: Kings big man Chimezie Metu has spent all of 2020/21 on a two-way contract, but with just 19 days left in the regular season, Sacramento is signing him to a standard contract, promoting him to the 15-man roster, reports Jason Jones of The Athletic (Twitter link). The team has confirmed Metu’s new multiyear deal, announcing it in a press release.

“Chimezie has worked hard this season and done a terrific job to earn his place on the team,” Kings general manager Monte McNair said in a statement. “He provides toughness and energy to the group. We are happy to watch his career develop in a Kings uniform.”

Metu, 24, initially came to training camp in December on a non-guaranteed contract, and while he didn’t earn a spot on the 15-man roster to start the season, the Kings liked him enough to bring him back on a two-way deal after he cleared waivers.

Metu has since emerged as a regular rotation player, appearing in 28 games (10.1 MPG) and averaging 5.1 PPG and 2.5 RPG. The former USC standout missed a chunk of the season after breaking his wrist on February 14, but he has appeared in all but one game since returning to action on March 24.

The Kings had one open spot on their 15-man roster before promoting Metu. They also intend to waive Chris Silva, opening up another spot in order to sign Damian Jones to a rest-of-season contract. Once all those moves are official, Sacramento will have a full 15-man roster, with an open two-way slot.

Although the exact terms of Metu’s new multiyear deal are unclear for now, the Kings could theoretically use their mid-level exception to sign him to a contract that goes beyond 2021/22 and/or exceeds the minimum. If they do, it would be the second time this season they’ve used a portion of their mid-level on Metu — his non-guaranteed camp deal was a three-year pact that took $1.6MM out of Sacramento’s $9.26MM MLE.