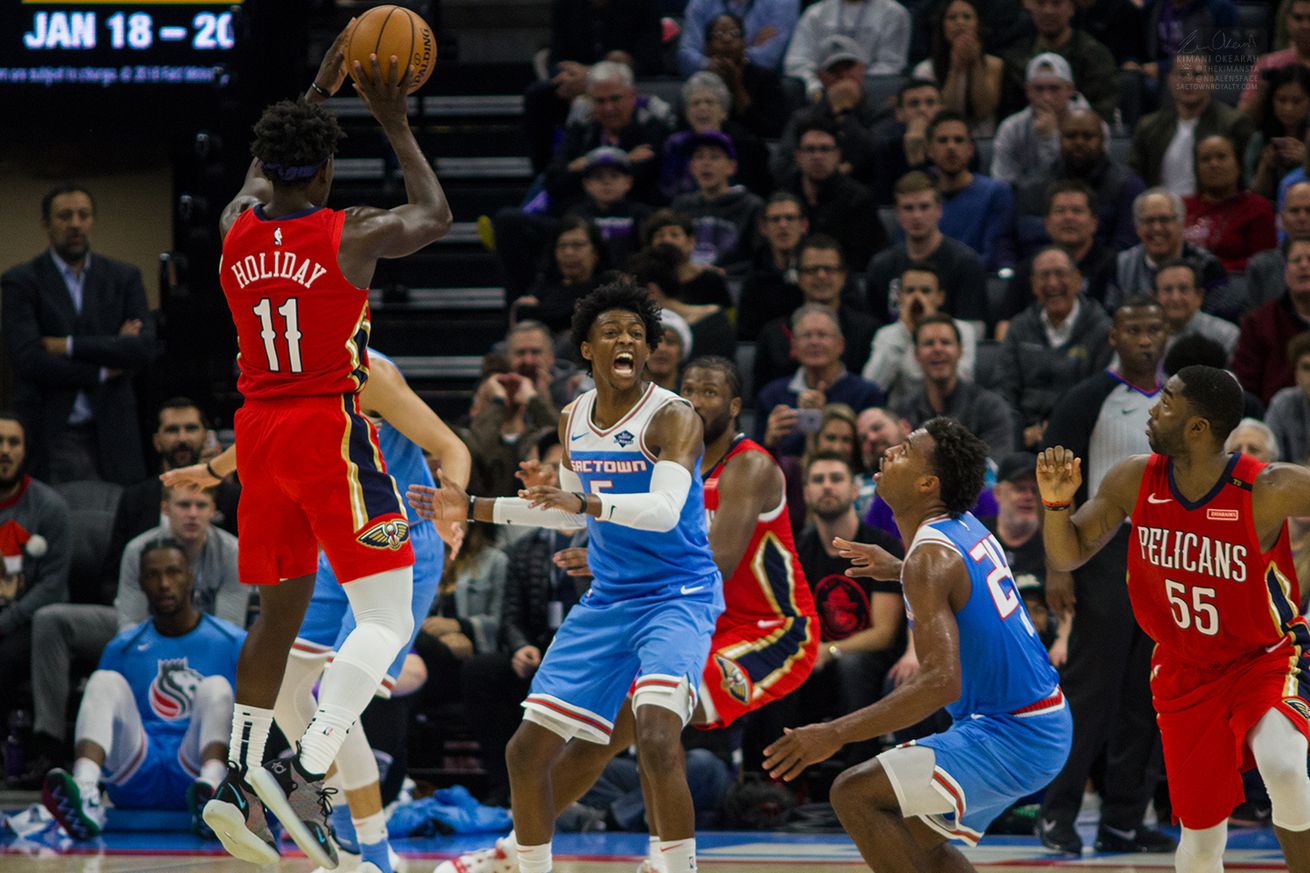 The Kings are staking their undefeated decade against the Pelicans who are on their second night of a back to back.

I’ve broken out of my cell at the SBNation SuperMax to inform you that the Kings have in fact won their first game of the decade and, even more surprising, that it was against NBA level competition. There will be no bottles to pop tonight however, as a bird named Pierre has swooped into town with baskets of unwanted Laker babies ready to show their ex-babysitter that they can put their toys in the basket when told. Winners of an impressive four out of five game stretch in which they beat the Blazers, Nuggets, Pacers and Rockets (before succumbing to LeBron and Le Brow last night), New Orleans is showing signs of life in their corner of the Western Conference cellar and doing so before the much and oft-hyped arrival of my son, Zion. This is going to be a good team sooner-than-later and maybe possibly even tonight. I wouldn’t pigeon-hole them as scoring fodder against the Kings, they are Pelicans after all.

A Rivalry Deferred: The diva in me really wants to spend the majority of this preview talking smack about the Los Angeles Lakers. There’s certainly endless material when it comes to that purple and yellow mold problem growing in the Staple Center’s locker room but I think the feeling comes from a place directly aimed at a particular group of Pelicans players as it is about the piss-and-purple franchise. There was something wonderfully entertaining about spending six years in the mud with Los Angeles, watching them struggle to rebuild and develop their young talents as the Kings have managed to do for a decade and a half now. The Pelicans young core of Brandon Ingram, Josh Hart, Lonzo Ball (as well as Kyle Kuzma and now Warrior, D’Angelo Russell) were easy to root against because every misstep the Lakers took, the further they dug themselves into the Kings layer of muck. Even after the Lakers were gifted Lebron James by grace of proximity to the endorsement and entertainment capital of the world, his inability to lead these players via Instagram posts into a playoff team was a wonderful bit of drama and a good bit of comeuppance for Lakers fans who just assumed this iteration was the next dynasty. Seeing that team struggle under the gravity of the black hole that is Lebron James, The Brand was cathartic, especially seeing as the Kings were going through a sudden and unexpected renaissance themselves.

And then Anthony Davis did what he did, the Pelicans did what they had to do and here we are, wanting to hate Lonzo Ball for the sideshow his dad put on for years in LA and for Big Baller Brand and Lakers fans trying to find a way to tell us that De’Aaron Fox was somehow lesser. But, Lonzo isn’t a Laker. His dad is off to peddle his wares for the youngest son to have to ignore and the kid ain’t bad. He’s just a basketball player and not a messiah for some asshole in Van Nuys to tweet you death threats at 3 am for mocking. The beanpole that every LA County resident was sure was the next Kevin Durant doesn’t have that hype pressing down on him, and he’s found himself averaging 25 points a game and 40% from three. Josh Hart, eh I never really had an issue with him. He’s like the fourth villain in the group of bad guys who cracks his knuckles after all the other main baddies had time to speak. I’m rooting for Josh Hart to get some lines in, eventually. The Pelicans are not the Lakers, of this I am absolutely certain. Whether these guys have been humbled by their unceremonious exit from LA and the mass exodus of fans out of their daily lives, I can’t tell. But, what I can say is, I think I’m okay with rooting for them. Lonzo Ball will always leave a bitter twitch in my face but so does sour beer, and I love me some sour beer. Brandon Ingram can now be less the punk kid that Lakers fans wrongly fully hyped and more the survivor of a scary medical incident who is finally showing his massive potential. Even D’Angelo Russell is *remembers where Russell is playing* … Naw, screw D’Angelo Russell.

The Kings try that thing where they take the fastest player in the league and make him run fast again and it works. Marvin Bagley’s dad screams at another minimum wage worker at G1C that they need to print more Bagley jerseys and has to be convinced there aren’t any because they’re all sold out. He instagrams a screenshot of a tweet he sent out that declares “#MAKE MORE JERSEYS” and tags Adidas. Nike continues to produce jerseys for the NBA.