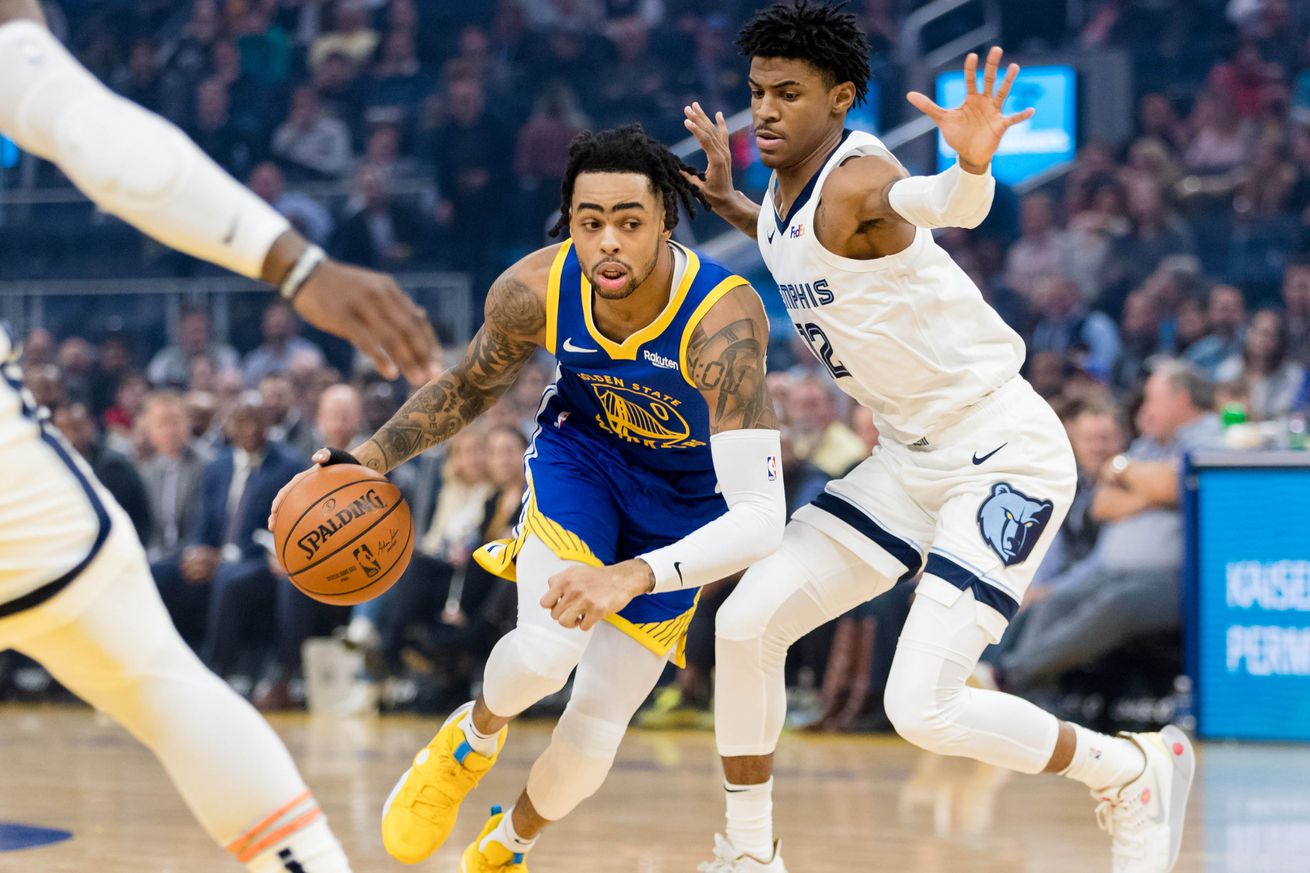 Memphis’ rookie point guard scored a game-high 26 points as the Warriors fail to win two games in a row for the first time this season.

After getting the win over the Chicago Bulls on Friday night at the United Center, the Warriors looked to do something they haven’t done all season—win two games in a row—when the Memphis Grizzlies came to the Chase Center for a Monday night matchup. The Warriors picked up one of their more impressive victories of the season the first time these two teams faced of when, on November 19th, the Warriors defeated the Grizzlies at the FedEx Forum in Memphis by the score of 114-95.

Unfortunately, the Warriors did not have a repeat performance on Monday night. The Warriors struggled offensively while the Grizzlies got hot from three-point range. Though the Warriors made runs throughout the game to stay within striking distance, the home team could not come up with the baskets or the stops to ever take control away from the visitors. When the final buzzer sounded, the Grizzlies notched the 110-102 win over the Warriors, dropping the defending Western Conference champions’ record to 5-20 for the 2019-20 regular season.

Monday night’s game featured a matchup of the two best rookies this season in the Grizzlies’ Ja Morant and the Warriors’ Eric Paschall. This graphic from NBC Sports Bay Area shows just how much these first-year players have dominated the Rookie-of-the-Year conversation so far.

While Morant struggled in the matchup between these two teams in Memphis, the electric first-year point guard played like someone who deserved to be taken with the second pick in the NBA Draft on Monday night. Morant scored a game-high 26 points, (including 13 points in the fourth quarter to seal the win for the Grizzlies) while going 3/5 from three-point range. It marked the fifth time this season Morant has scored 25+ points. Morant also finished the game with 7 assists, as his attacking play led to more open looks for the his teammates and made a fairly middling offensive team look like a juggernaut.

While Morant shined, Paschall struggled. In one of his worst performances of the season, Paschall scored just 5 points, going 2/10 from the field while grabbing just 2 rebounds and not handing out a single assist. This poor play from Paschall was thanks to the Grizzlies’ defensive effort, specifically the play of Jaren Jackson Jr.

Jackson Jr. is one of the bigger and longer players Paschall has dealt with this season and he really made him work, especially in the first half of Monday night’s loss. Paschall went 0/5 from the field in the first half, not knowing what to do against the size and length of Jackson Jr. It’s all part of the learning process for Paschall, a reminder that he’s still just a rookie and has many lessons yet to learn in this league.

Burks a bright spot on dark offensive night for Dubs

While Paschall underwhelmed on offense, Alec Burks made key contributions for the Warriors. Coming off the bench, Burks scored a team-high 18 points, going 2/4 from long distance. It was Burks’ seventh-consecutive game scoring 10+ points as the free-agent signing continues to be a standout player for the Warriors this season. While the Warriors received solid offensive production from Burks and Draymond Green (who tied a season-high by scoring 16 points), the rest of the Warriors’ lineup was considerably less proficient.

The Warriors shot 37.6% from the field in Monday night’s loss, the second-worst shooting performance for the Warriors in a game this season. When you shoot that poorly in a game, it’s going to be very tough to win unless everything else goes right. Unfortunately, that was not the case and the Warriors were dealt another defeat.

Of all the Warriors who saw action on Monday night, it was D’Angelo Russell who was the greatest example of these shooting woes. Russell scored 18 points but did so while going 6/22 from the field. There were innumerable shots from close range, floaters and layups, that Russell missed. Those high percentage shots—ones Russell normally makes— might have had a big impact on the result of the game, allowing the Warriors to extend scoring runs and perhaps regaining a lead. Russell has not played well since returning to the Warriors lineup after that right thumb sprain sidelined him and hopefully he’ll get back on track soon.

The Warriors did not help their cause by committing 16 turnovers, resulting in 24 points for the Grizzlies. Though Green’s energy and effort provided the Warriors with much-needed scoring, it also led to some reckless and careless play that gave the ball back to the Grizzlies. Green addressed this in his postgame comments:

You could tell the Warriors few vets were pissed about this loss. One of the rare nights they should’ve and could’ve won if they played even decently. Draymond Green: “We fucked around with the game. We’re not good enough to do that.” pic.twitter.com/x3FNbz0zWT

While the Warriors with Stephen Curry and Klay Thompson could get away with some carelessness and turnovers because they had the talent and three-point firepower to make up for it, they can’t afford to do that with this depleted roster.

Grizzlies’ three-point shooting leads them to a win

In addition to Morant, Jonas Valanciunas got into the act from beyond the arc, making both of his three-point attempts on his way to scoring 13 points and pulling down 10 rebounds. Coming off the bench, Grayson Allen also got hot from three-point range, going 3/4 from long distance and scoring 15 points before exiting the game with an ankle injury.

Those three-point looks the Grizzlies converted were due in large part to Morant. Morant’s attacking put pressure on a suspect Warriors’ defense, causing their defensive rotations to get thrown off, leaving Grizzlies players open that Morant would find for the uncontested shot. Cleaning up these defensive lapses, along with doing a better job of converting high-percentage shot attempts, will be key to the Warriors get back on the winning track in the coming games.