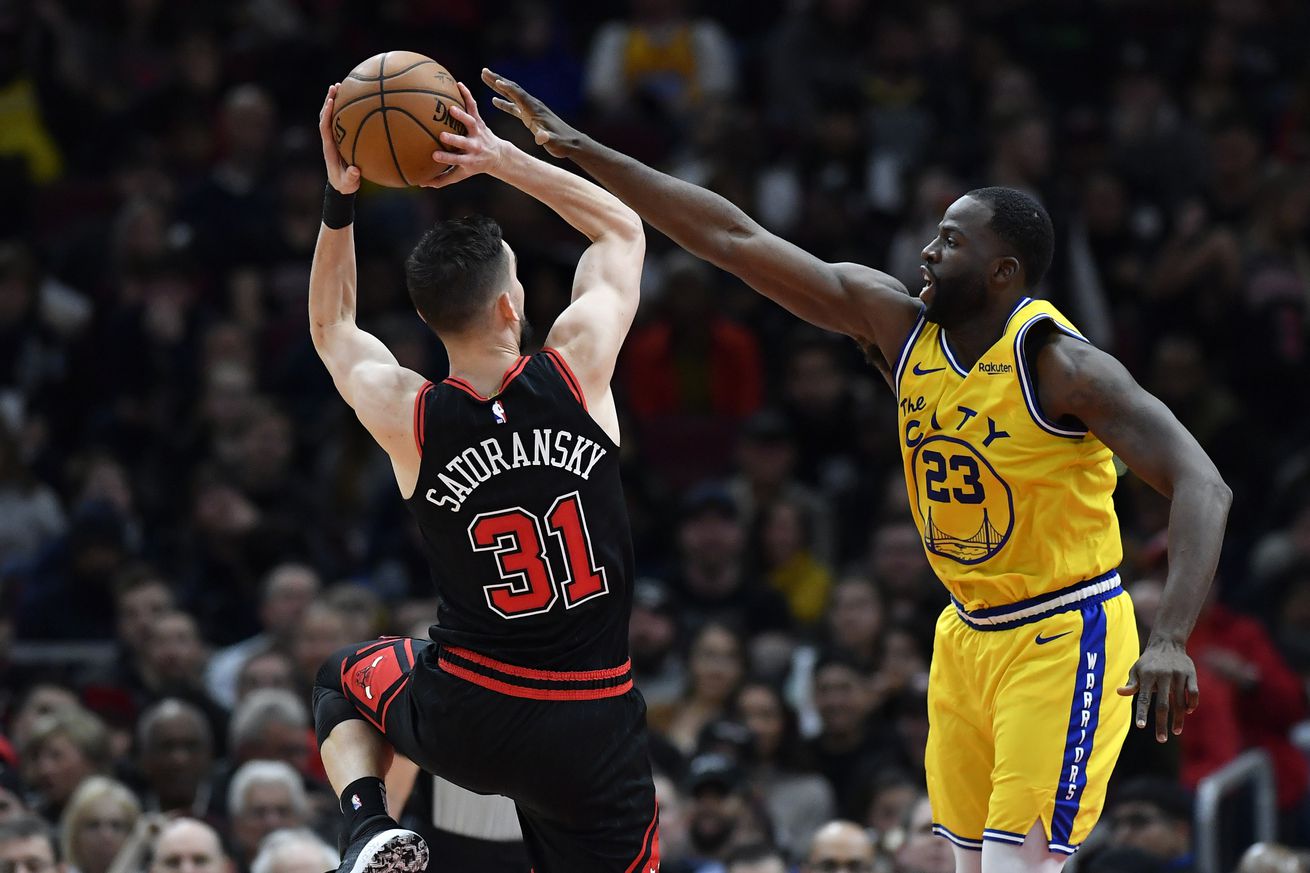 By defeating the Bulls for the second time, the Warriors achieved a season sweep for the first time this season.

The Golden State Warriors had 19 turnovers, which were considerably more than their season average of 14.7 (good for 11th in the entire league going into last night’s game). They gave up 10 offensive rebounds, which were translated into 19 second-chance points by the Chicago Bulls. The Warriors’ lackluster three-point defense allowed the Bulls to shoot an astonishing 17-of-41 from beyond the arc, good for 41.7 percent. Going by those box score metrics alone, the Warriors had no business winning last night’s game.

And yet, they won anyway.

The two main takeaways from last night’s game — and perhaps the two main reasons for the Warriors pulling out the victory despite those aforementioned setbacks — were the Warriors’ incredible overall field-goal percentage and their ability to draw fouls and go to the line. It’s hard to lose a game when your team shot 53.5 percent from the field. To break it down even further, they shot 29-of-47 on two-point field goals — 61.7 percent — despite being one of the worst field-goal shooting teams in all of the NBA.

It also mightily helps when your team draws countless fouls that result in points from the charity stripe. The Warriors had 22 free throw attempts, and despite performing below their standard as the best free-throw shooting team in the NBA, they made enough of them to spell the difference: 15 made free throws out of their 22 attempts, as opposed to the Bulls’ measly 3-of-5 clip from the free-throw line.

The Bulls were content on letting it fly from three-point range, as evidenced by their 41 attempts from beyond the arc. They managed to hit 17 of those attempts, but they failed to adjust when their three-point shooting well ran dry. The Warriors, on the other hand, had a more varied attack, and were smart enough to mix points in the paint into their scoring diet. They only had a slight advantage in points in the paint over the Bulls — 42 to 40 — but their physicality enabled them to draw more fouls.

Despite being limited in his minutes after coming off a heel injury, Green’s competitive nature was nevertheless present. His renewed aggression was a necessity, and his desire to make plays for his teammates was ever-present. And with the game being on the line up till the last possession, Green’s presence on the floor was deemed necessary by Steve Kerr, resulting in the veteran clocking in 30 minutes of playing time.

“I definitely wanted to finish (this game),” Green said during his postgame interview with sideline reporter Kerith Burke. “As a competitor, you want to play. I understand the logic behind (the minutes restriction), but I compete for a living, so anytime I can be out there, I want to be out there.”

Draymond Green on his limited minutes this season: “I understand the logic behind it but I compete for a living”

The Warriors’ main bench contributors — Ky Bowman, Alec Burks, and Marquese Chriss — also were able to put up efficient scoring nights. Bowman only scored 8 points on a 3-of-4 clip (2-of-3 from beyond the arc), but was able to dish out 6 assists. Burks once again acted as the Warriors’ most reliable scoring option off the bench, with his 14 points coming from a 6-of-10 clip from the field. Chriss was an energetic second-unit presence, whose 9 points included a rare three-point shot that enabled the Warriors to stay on the heels of the Bulls.

But the most eye-catching sequence of the game came from the Warriors’ top scorer last night. Glenn Robinson III finished with 20 points on an efficient 8-of-12 shooting clip from the field, one of which came on this blast-from-the-past sequence:

This particular possession should look familiar to Warriors fans: a D’Angelo Russell/Green pick-and-roll, with Green acting as the pressure release and decision maker on the short roll. With Russell being doubled off the screen — much like Stephen Curry was when he was in the role being occupied by Russell in this sequence — the pass to Green creates a virtual 2-on-1 situation under the basket. In the role once occupied by Andre Iguodala, Robinson runs along the baseline toward the dunker’s spot and catches the well-placed lob from Green for the emphatic game-winning dunk.

After the game, Green heaped praises upon the former slam dunk contest champion.

“I was watching him for years, back in his days at Michigan and even his time in the league,” Green said. “He was always hampered by injuries quite a bit, so you kinda see glimpses here and there but never really with any consistency because he was always hurt. He’s gotten an opportunity this year, he’s been healthy which is the key, and he’s playing really well.”

Draymond Green on Glenn Robinson III, who continues to impress on both sides of the ball: pic.twitter.com/0HCIsrVodk

After a first half during which the Warriors finished with a negative net rating of minus-2.2, the Warriors clamped down on defense during the second half, before finishing the game with an excellent defensive rating of 105.4 — enough to improve their net rating for the game to a plus-1.0.

After five games of grueling travel along the East Coast, the Warriors will now return home to San Francisco, where they will be facing the Memphis Grizzlies and the New York Knicks on Monday and Wednesday, respectively. Both of those games are winnable (the Warriors having already won against the Grizzlies earlier this season); if they are looking to establish a winning streak for the first time this season, this upcoming week’s two-game homestand will be the best window of opportunity for the Warriors to string together a series of victories.