Every week, Hoops Rumors takes a closer look at players who will be free agents or could become free agents next offseason. We examine if their stock is rising or falling due to performance and other factors. This week, we take a look at players from the Pacific Division: 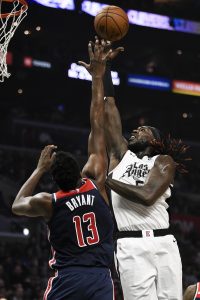 Montrezl Harrell, Clippers, 25, PF (Up) – Signed to a two-year, $12MM deal in 2018
The Rockets had no idea what they were giving up when they tossed Harrell into the Chris Paul blockbuster. Harrell doesn’t have a three-point shot but otherwise, he’s a terror. He was a prime candidate for Sixth Man of the Year last season and will be once again. He’s averaging 19.1 PPG, 8.0 RPG and 2.2 APG despite starting just two of 22 games. Harrell will be a hot commodity as an unrestricted free agent and the Clippers will be pushed into luxury tax territory if they want to retain him. It would be worth the cost.

Glenn Robinson III, Warriors, 25, SF (Up) – Signed to a one-year, $1.9MM deal in 2019
Robinson’s last season in Indiana was a washout due to an ankle injury. His one season in Detroit was a washout due to a lack of production. With an expanded role on a bad team, Robinson is upgrading his resume. He’s averaging 32.1 MPG as a starter and averaging 11.6 PPG, 4.6 RPG and 2.0 APG while making 38.9% of his 3-point tries. Stats compiled under these circumstances can be deceiving but Robinson has at least regained his confidence and shown he’s worthy of a rotation spot on most teams.

Avery Bradley, Lakers, 29, SG (Down) – Signed to a two-year, $9.8MM deal in 2019
Bradley started 10 games for the streaking Lakers this season, though he didn’t shoot well (28.6% from deep) playing alongside two of the league’s biggest stars. The big issue for Bradley in recent seasons has been staying on the court and once again, the injury bug has bitten him. He’s out at least another week with a lower leg issue. Bradley’s contract includes a $5MM player option and he needs to show he can stay healthy and productive for a long stretch in order to decline that option and test the free agent waters.

Aron Baynes, Suns, 32, C (Up) – Signed to a two-year, $10.6MM deal in 2018
The popular Australian big man has gotten off to a terrific start in Phoenix with Deandre Ayton serving his 25-game league-imposed suspension. Baynes is averaging 14.7 PPG, 5.7 RPG and 2.9 APG in 24.0 MPG through 13 games. He’s also turned into a solid three-point shooter (43.9%), adding a new element to his game. He’s been slowed recently by a calf injury but with a dearth of quality centers around the league, Baynes will get some multi-year offers as an unrestricted free agent this offseason.

Harry Giles III, Kings, 21, PF (Down) – Signed to a three-year, $6.6MM deal in 2017
The 20th pick of the 2017 draft, Giles has battling injuries since entering the league. He didn’t make his NBA debut until last season, then appeared in 58 games off the bench. The Kings declined their fourth-year option on him prior to this season, making him an unrestricted free agent this summer. He doesn’t have a rotation spot under new coach Luke Walton, averaging just 7.4 MPG in seven appearances this season. The same age as a college senior, Giles will get a second chance somewhere but his offers will be modest.