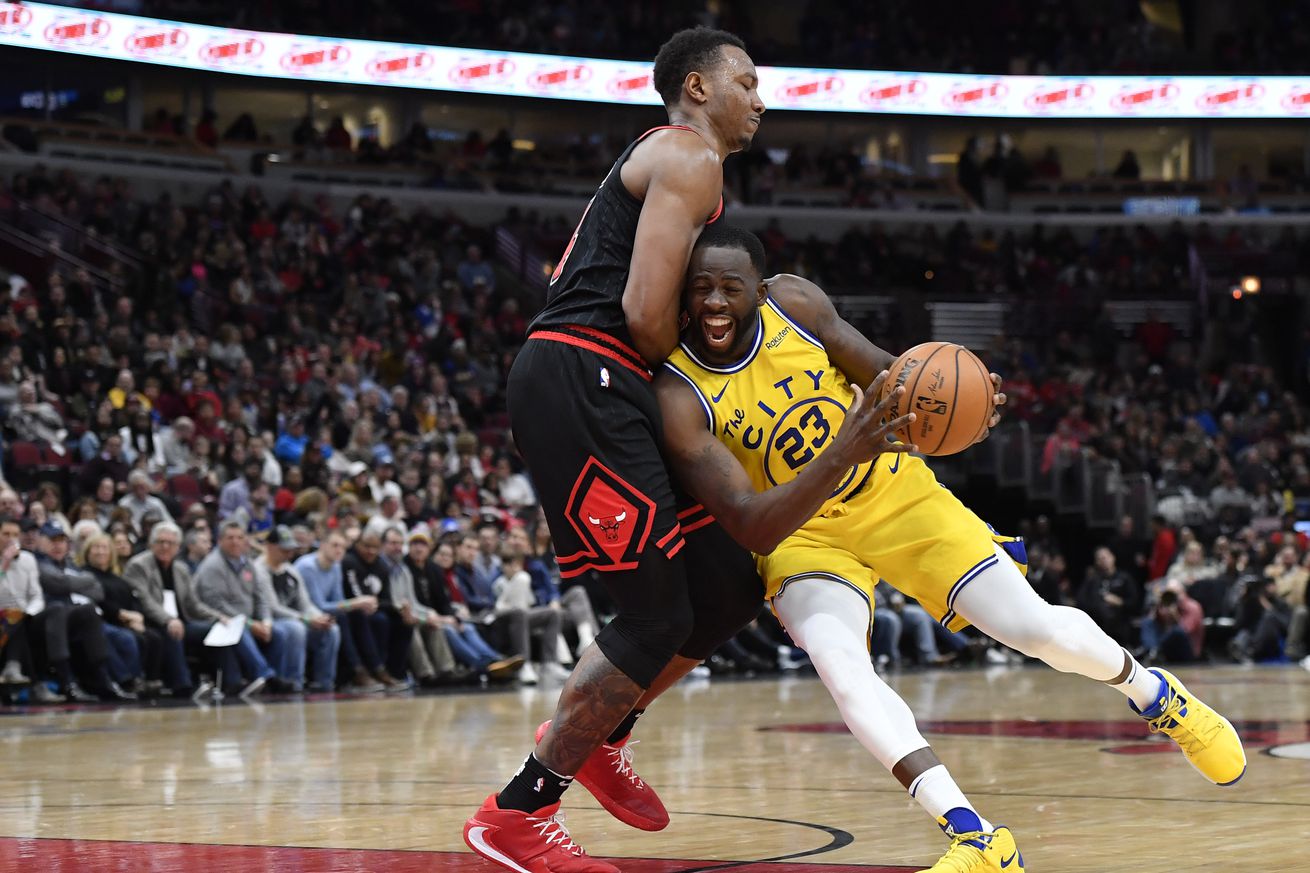 The Warriors finish with a 1-3 record against the Magic, Hawks, Hornets, and Bulls.

In the previous edition of the Warriors week in review, I polled the readers as to what they thought the Dubs’ record would be after completing a series of “winnable” games against the Orlando Magic, Atlanta Hawks, Charlotte Hornets, and Chicago Bulls.

Now, I have “winnable” in quotes because … well, you probably know why after what just happened this week. A few of you — 17 out of 152 people who voted in that poll, to be exact — thought that the Warriors would go 4-0. While that isn’t impossible, one look at this roster would make that possibility highly improbable. Getting one win is already difficult enough as it is; stringing together four straight wins? Not with Willie Cauley-Stein as their starting center.

Those who voted for 1-3 hit the jackpot. Save for the last game of the week, the Warriors were reminded of their place among the bottom-tier teams of the NBA. After being defeated by the elite and mid-tier teams, they were also shellacked by those who occupied the same stratus as them in the NBA hierarchy. That’s … not good, folks. It’s already bad enough to know that you’re one of the worst teams in the NBA.

But to be the worst of the worst? Ohh, how the mighty have fallen.

Let’s experiment with something slightly different this week. I’ll be giving mini-recaps of each of the Warriors’ games, presenting some key stats that contributed to their win and losses. I’ll be combining the states of the Warriors’ offense and defense in this section, culminating in a final letter grade.

This game was a close affair between a bottom Western Conference team and a fringe playoff team in the Eastern Conference. (Let’s not kid ourselves, though — the Magic would be well out of the playoff race if they played in the West.) It was a tight contest, but the Magic came out on top by four points.

Looking at the advanced stats, the Warriors defense held up pretty well. The problem was that their offense couldn’t generate anything against the Magic, as evidenced by their 96 points and abysmal 100.0 offensive rating. They shot poorly — 39.6 percent from the field, and 26.1 percent from beyond the arc.

Two teams who are two of the worst in terms of both offensive and defensive efficiency squared off, but one team was made to look like one of the best defensive teams in the league — and no, it wasn’t the Warriors.

Getting blown out by Trae Young and the Hawks, the Warriors didn’t have a chance offensively, and their defense crumbled under the pressure of the budding star who is being dubbed by many as the heir apparent to Stephen Curry. While the Warriors were able to largely prevent Young from exploding from beyond the arc, Young adjusted by driving to the rim and making plays for his supporting cast. They were helped by the Warriors turning the ball over 23 times, which the Hawks translated into 25 points off turnovers.

The Hornets were another team whose offense belonged in the bottom tier along with the Warriors, but were made to look better than they actually are because, well, the Warriors were simply worse than them, especially on the defensive end.

The most eye-popping stat is the Hornets’ 21 made threes out of 48 attempts — 10 of which came from Devonte’ Graham, who is currently ranked second in the league in terms of three-pointers made (his 88 is behind James Harden’s 104). With the Warriors only making 9 of their three-point attempts, this translated into a 63-27 advantage in points coming off threes for the Hornets. Yeesh!

The Warriors had already beaten the Bulls at Chase Center earlier this season, so they might as well complete the season sweep, right? That, they did. It was a close contest, with the Bulls leading for the majority of the time. But the Warriors kept nipping at their heels and grabbed the lead when it mattered most — down the stretch and until the end of the final buzzer.

The Bulls managed to shoot 17-of-41 from beyond the arc (41.5 percent) and grabbed more offensive rebounds (10 to the Warriors’ 6) that they were able to translate into 19 second chance points. But the Warriors defeated them with their overall superior field-goal percentage (53.5) which included an incredible 29-of-47 clip on two-point shots (61.7 percent). Additionally, the Warriors got to the line more often, where they shot 15-of-22. The Bulls, on the other hand, only had a 3-of-5 clip from the free-throw line.

The Bulls offense faltered in the end, with their three-point shooting running dry and the Warriors executing on both ends to near-perfection in the endgame, which finally got them their first series sweep of the season.

State of the Warriors offense

It’s safe to say that based on both the eye test and the statistical evidence shown above, the Warriors offense continues to falter without any hope of it improving. Their efficiency has now become the third-worst in the league after being an average offensive team earlier this season. There’s only so much this roster can do without Curry and Klay Thompson, and with D’Angelo Russell still finding his legs after being out with an injury, expect the Warriors offense to stay in that bottom tier for a while, if not for most of this season.

State of the Warriors defense

Looking at the Warriors’ defensive performance this past week actually lends credence to the theme of their week: They defended pretty well for the most part, but their offense faltered to levels beyond what was salvageable by their defense. In other words, their offense was so bad last week that it couldn’t support their defensive efforts.

The Warriors were once the worst defense in the league this season. They’re now 25th, which is a significant improvement, even if it still doesn’t bring them out of that overall bottom tier in the grand scheme of things. That’s something to hold on to, and something to monitor looking forward.

The defense is on an upward trend, and the offense is trending toward the opposite direction. Hopefully, with Russell’s comeback and eventual return to his normal game fitness and rhythm, the Warriors will experience improvement on offense, even if it’s only a slight one.

The offense was terrible, the defense was nothing special but much better than their previous rating as the league’s worst defense, and they lost to three East teams including one blowout loss against a fellow hopeless case. The defense improving is certainly a good development, but losing thrice and only winning once hurt their grade in my book.

The Warriors are finally returning home to San Francisco for a two-game homestand, first against the Memphis Grizzlies on Monday, then against the New York Knicks on Wednesday. I hate to use the term “winnable” again, since last week was also winnable, yet the Warriors only managed to win once. But still …

The Warriors already destroyed the Grizzlies earlier this season by a score of 114-95. The Knicks just fired their head coach and are the only team in the league with a worse record than the Warriors. Those two games are indeed winnable. Extending this current one-game streak to three by the end of Wednesday is by no means a preposterous claim — it’s entirely possible.

On the other hand, they will be going to Utah on Friday to face the Jazz, and it’s safe to say that they’re not going to have a good chance of winning that game.