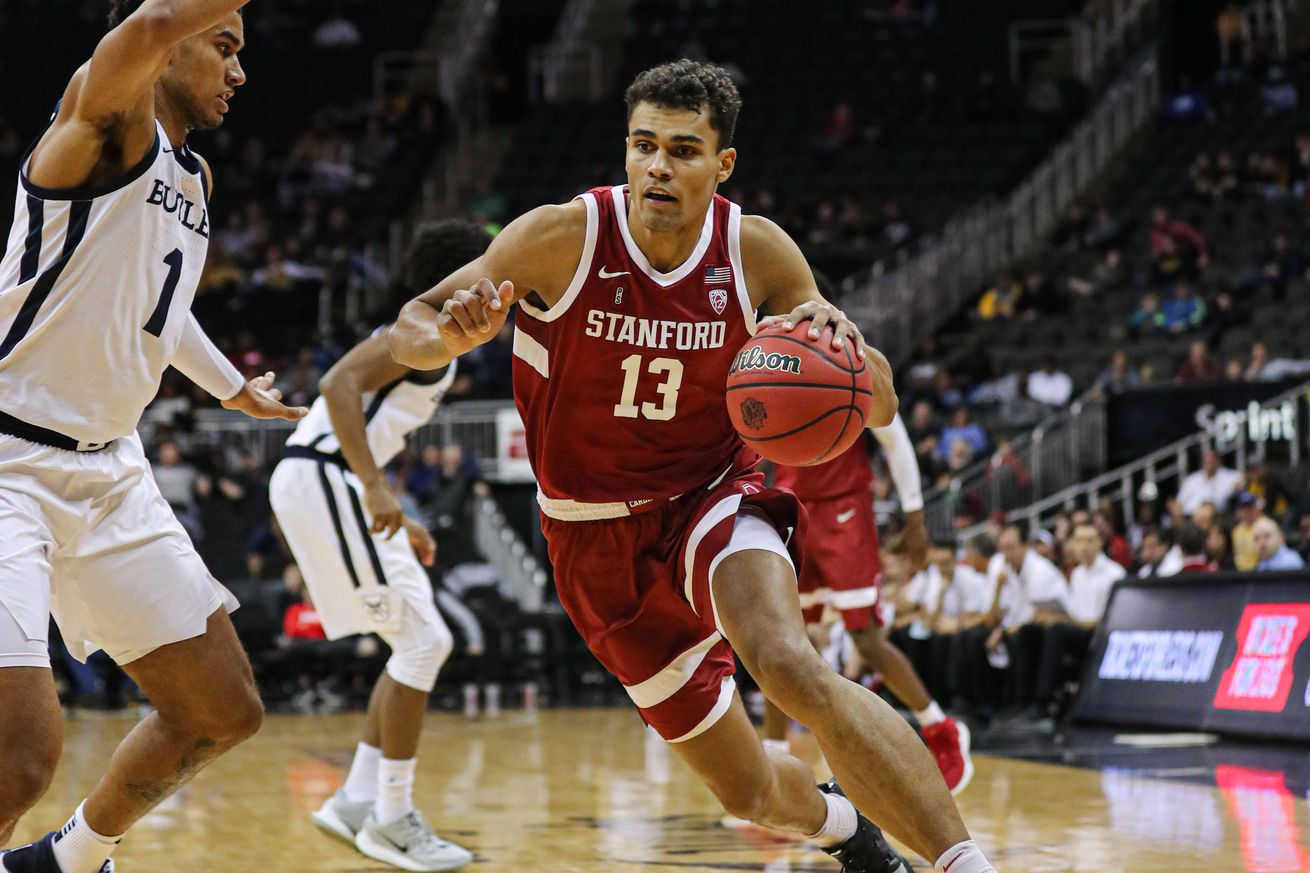 Sigh. As if Cal’s multi-year stay in basketball wilderness weren’t bad enough, here comes Stanford with an 11-2 record and an efficiency profile that suggests they might be capable of competing for a top 4 spot in the conference and perhaps an NCAA tournament bid. Hilarious upset wins over Stanford (and the general mediocrity of Stanford basketball) has been the only tiny salve over the last two season. If early returns are an accurate predictor, we might not get that salve this season, because Stanford appears to have taken a step forward this year.

PG Daejon Davis – Pass first yet turnover prone point guard. Scoring efficiently to start the year.
G Tyrell Terry – Borderline top 100 4 star combo guard has been a plus shooter from all over the floor with excellent on ball defense.
G Bryce Wills – Basically Stanford’s JHD, but with more offensive and defensive responsibility.
F Spencer Jones – 3 star freshman is technically a forward, but dude is just there to shoot. 80% of his shots are 3s, but why do anything else if you’re shooting 47% from there?
F Oscar da Silva – Stanford’s best player, a two way force who appears to have taken a big step forward in terms of offensive efficiency by cutting down on turnovers and drawing more fouls.

G Isaac White – back up guard, just a shooter
F Jaiden Delaire – more of a post oriented 4 as compared to Jones’ stretch 4.
F James Keefe – your classic low usage backup big.
F Lukas Kisunas – back up big may be Stanford’s best rebounder, but he’s a turnover machine on offense.

An important note: Haase has been riding his starters HARD, and in close games his bench guys are getting roughly 30 minute total. And I think that’s probably the right call.

What Stanford has is potentially the best defense in the Pac-12, and juuuuust enough offensive talent to support that lights out defense. And while it doesn’t seem like it should be working that well, Stanford enters conference play with a record of 11-2, only losing to top 10 Butler by 1 on a neutral floor and top 10 Kansas at home by 16.

It should be noted that some of Stanford’s stats come with schedule strength concerns – Stanford has only played three games against teams approximating high/mid-tier Pac-12 quality opposition. But, unfortunately, Cal isn’t playing at that level at the moment, either.

Keys to the Game

How is Cal going to score? Not a very precise or specific key, but this is where we are. Cal has the worst offense in the Pac-12, and Stanford might have the best defense. More specifically, Stanford is top 60 in each of the defensive four factors, so there’s not even any particular weakness to point to. I don’t really see how Cal is going to score efficiently, so the better hope (as per usual) is to turn the game into a defensive rock fight.

So, on that point:

Make Stanford’s shots tough – No duh, you say, it’s that the goal of every defense? Well, yeah. But Stanford’s offense is somewhat poised at a cliff of inefficiency (A cliff they fell off of against Kansas’ nationally elite defense). Stanford doesn’t get offensive rebounds (296th in the nation in Oreb%) and Stanford turns the ball over a lot (again, 296th in the nation in Oturnover%). They don’t draw a ton of fouls and they don’t shoot spectacularly well from the line. Their entire offense is kept afloat because they have been shooting lights out from the field. If Cal can make Stanford’s shots difficult, their offense can easily descend into a slog of turnovers and one-and-done possessions. It’s a tall task and will require Cal’s defense to play with an intensity and focus that they haven’t really displayed most of the year. But the opportunity is there.

And more specifically on the play-good-defense front:

Slowing down da Silva without leaving shooters open – I’m not super confident that Cal has the personnel to slow down da Silva one-on-one, which means that help defense might be a critical feature against Stanford. But helping on da Silva means leaving shooters like Jones and Terry open, and that’s not a good recipe either. There ARE players that you can help off of (primarily Bryce Wills), so know your personnel.

What can you say? In Stanford’s three games against opposition roughly as good as Cal (Montana, William and Mary, San Diego) the Cardinal went 3-0 with an average margin of victory of 15. Stanford isn’t a great team, but they’re a good team. They also represent the 2nd best defense Cal has faced after Duke. The Cardinal probably won’t score 87 like the Blue Devils did, but Cal went for 52 and 45 in their previous two games against top 50 defenses. In other words, our Bears would probably do well break 60 points tonight.

When Stanford comes to Haas Pavilion later this month Cal will have a plausible-ish shot at a satisfying upset win over a rival. I wouldn’t get your hopes up for this one.