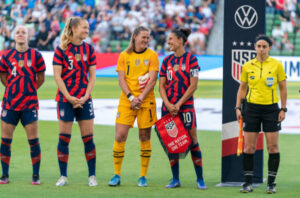 PODCAST – What’s up Internet? This week on Last Word SC Radio, Matt Pollard is back and Rachael Kriger has USWNT roster analysis. She spits FIRE about some of the personnel decisions and the merits behind them. Buckle up WoSo.

Then we do Red Light, Yellow Light, Green Light on MLS coming back after the international break. The duo finish out with MLS and USWNT Weekend Pick ‘Ems.

Rachael Kriger is a Senior Editor at Last Word on Soccer. She is the lead writer for the Seattle Sounders, U.S. Women’s National Team and NWSL. Hailing from Moscow, Russia, she resides in Pittsburgh, Pa., home to the Riverhounds. Rachael is a big fan of her home country’s national teams and cried when Russia beat Spain in the World Cup Round of 16. However, Rachael has to admit that basketball was her first love and still keeps in contact with that sport through coaching.