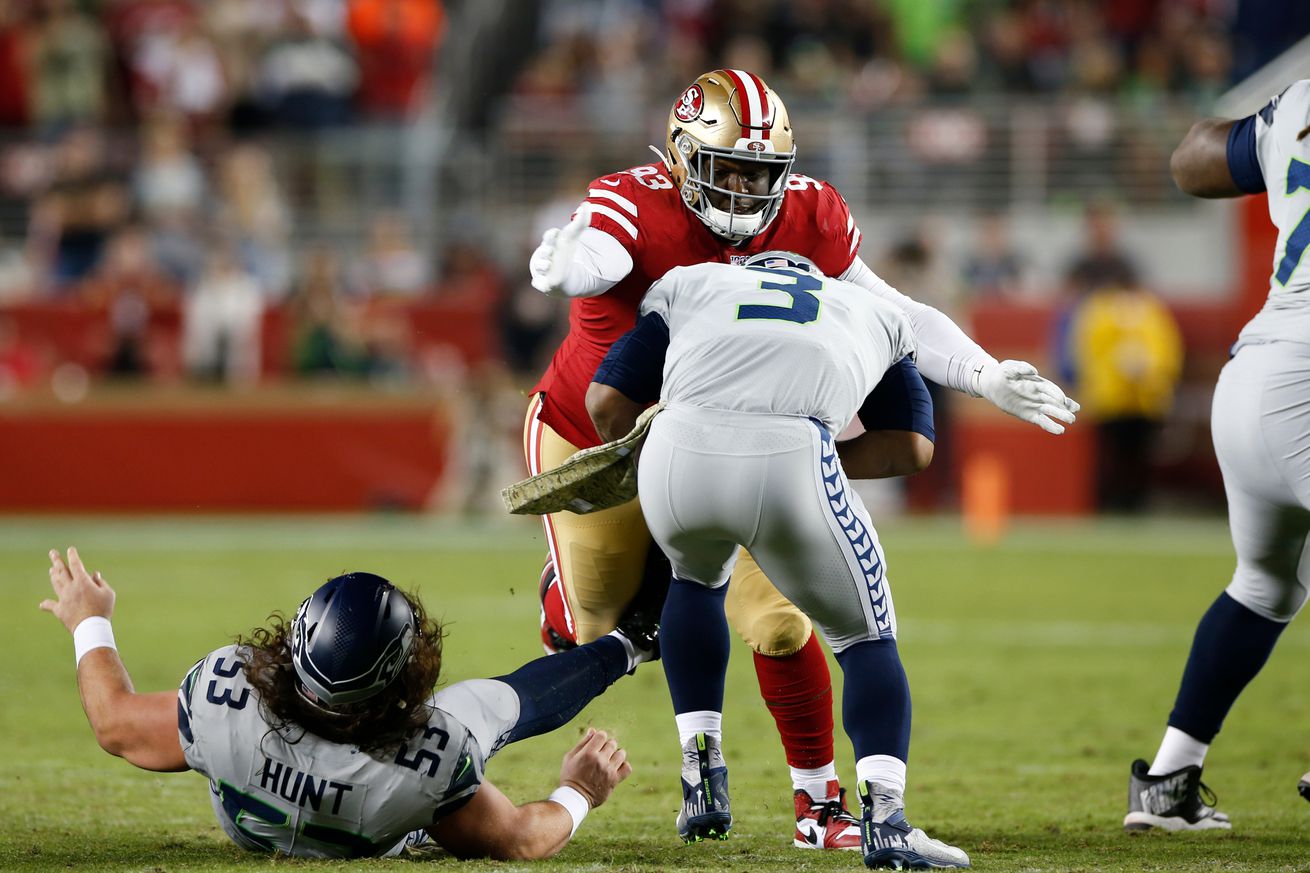 Breaking down the 90 players on the 49ers offseason roster in 90 posts (over 90 or so days). Today is defensive tackle D.J. Jones.

San Francisco 49ers defensive tackle D.J. Jones didn’t enter 2019 with great expectations. Jones started at nose tackle the first four games of the season, then injured an ankle that kept him out of the majority of the Rams game and eventually the following week against Washington. Jones returned the following week, would wind up starting Weeks 10-14, before injuring his other ankle. The final injury would keep Jones out for the rest of the season. When Jones was on the field, he was the most underrated 49ers player, to me. He gave the defense high-quality snaps, usually hovering in the low 30s.

Jones wasn’t your typical stout, run defending nose tackle. He showed off plenty of range and athleticism that sparked a few highlights. Jones had eight more run stops and seven more “defeats”—a tackle that results in a loss, a tipped pass that leads to a stop on third/fourth down, or a play that results in a turnover—on 23 fewer snaps than Sheldon Day. Jones was active, and that’s exactly what the Niners need in the middle.

Jones will have to show that he can rush the passer consistently. Jones was 85th in the NFL in pass-rushing productivity among defensive tackles, which PFF’s stat that tells us how often a player is getting after the quarterback on a per snap basis. Does that ranking reflect Jones’s limited pass-rushing snaps, or does he have to get better? Or Both? Developing a go-to pass rush move could go a long way for Jones.

Jones enters the final season of his contract. His cap number will be $861,967 for this season. Jones will be an unrestricted free agent next year. He must stay healthy if he wants to earn a contract that’s not incentive-based.

The 49ers average DVOA against the run when Jones played over 15 snaps: -11%

In the other eight games where Jones didn’t play more than 15 snaps: -2%.

For context, using Football Outsiders rushing DVOA from last year, -11% would have been good for 13th best in the NFL, while -2% would have been good enough for 23rd in the league. Expect the rushing woes to go away when Jones is on the field. The Chiefs averaged 5.8 yards when they rushed up over the left guard. I know this isn’t fair to say as there are plenty of “what ifs” for both teams, but I believe the Super Bowl has a different outcome if Jones is active.

Will Jones improve as a pass rusher? He’s 25 and last season was the most he’s ever played, and Jones didn’t play more than 350 snaps. With Kris Kocurek as his coach and the embarrassment of riches along the defensive line, it’s safe to assume Jones will pick up on a few pass rush moves. Jones must improve his endurance so he can last not only in games but for the duration of the regular season. I’d expect Jones to benefit from the talent around him and have a career year, which will put the front office in a tough spot next offseason. I’m fascinated to see the market for Jones.