Kwon Alexander will have a chance to suit up for the 49ers in the playoffs. On Thursday, the Niners designated the linebacker for return, as Matt Maiocco of NBC Sports tweets. 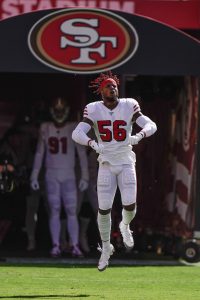 It’s not a given that Alexander will be able to play the Niners’ divisional round game so soon after suffering a pectoral injury. However, the move to bring him back from IR leaves that possibility open.

Alexander, 25, was said to be done for the year after landing on IR with a torc pec on November 1st. In eight games, Alexander rated as Pro Football Focus’ No. 33 ranked linebacker in the NFL, but it’s worth noting that PFF’s metrics have never been high on his work.

Getting Alexander back on the field in time for their Jan. 11 game would be a huge left for SF, particularly after their rash of injuries in the front seven. By this time next week, we should know whether Alexander will be able to play in the divisional round showdown.