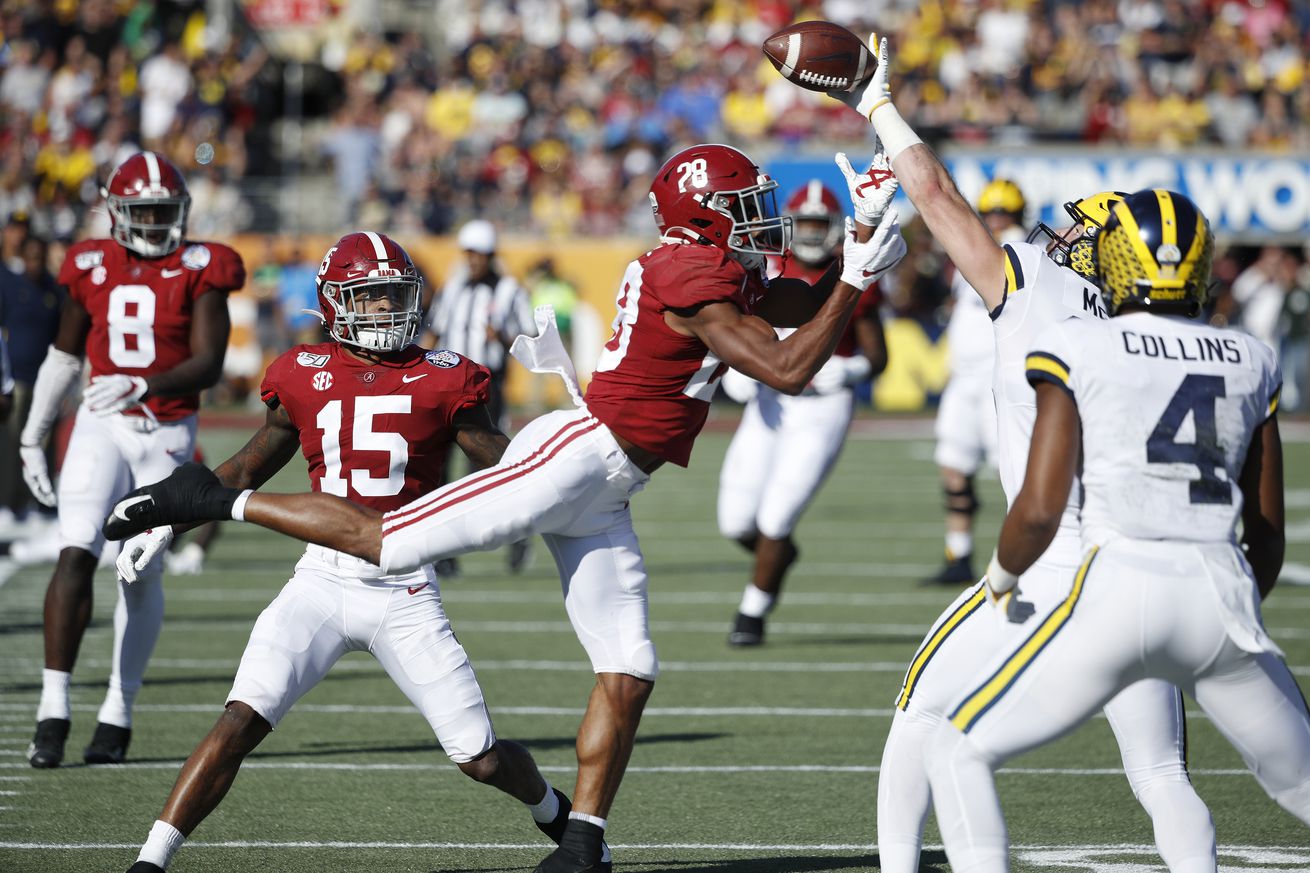 Not a running back!

A few weeks ago, we had the first mock draft of the season. It’s nice not to have to talk draft yet with the San Francisco 49ers having the No. 1 seed in the playoffs. We’ll still monitor the Mock Drafts, and in the first edition, good old Todd McShay of ESPN gave the 49ers a running back in the first round. I love J.K. Dobbins from Ohio State and believe he will be an impact player in the NFL, but I’m not drafting a running back in the first two rounds. There’s just too much value out there.

Speaking of value, the 49ers will have a nice opportunity to find picking 32nd in the draft this year. The team can go a few different routes, but I’m continuing to surround Jimmy Garoppolo with weapons or building on my strength. If I can find a team to take Dee Ford and his contract in exchange for a second or third-round pick, I do it. I’d replace Ford with an edge rusher on a rookie contract and use the money freed up to lockdown Arik Armstead, Jimmie Ward, George Kittle, and DeForest Buckner. Obviously, you can’t use all of Ford’s contract on those players, but that money will help a great deal.

It’s a loaded draft class at wide receiver. If one of the uber-talented guys fall to the end of the first round, I have no problem investing in another receiver. Yes, you just drafted three in the top three rounds and traded for Emmanuel Sanders. It may be unpopular, but I’d move on from Sanders and take a guy like Tee Higgins from Clemson in a heartbeat. Jalen Hurd and Dante Pettis aren’t stopping me from drafting a potential superstar. Higgins is one of three or four receivers I wouldn’t pass up.

Scouring the internet for mocks, the one I was initially going to use gave the 49ers a center. The team just reworked Weston Richburg’s contract, and he played like a top-five center this season. He’s not going anywhere. I found a more interesting mock that gave the Niners a safety out of Alabama:

Notes: The 49ers defense is stacked, but it could use some reinforcements on the back end, especially if starting safety Jimmie Ward leaves in free agency. Xavier McKinney can take what’s an already great defense to an even higher level.

McKinney can cover the slot and hold his own against the run; he’s the prototypical safety prospect for today’s NFL.

McKinney started at safety as a sophomore, where he was voted the Defensive MVP in the Orange Bowl. As a junior in 2019, McKinney was named third-team All-American from the AP and PFF. He was also a semifinalist for the Jim Thorpe Award, which goes to the best defensive back in the country. McKinney is a stat sheet stuffer that can rush the passer, cover the slot, or play the deep safety role. McKinney has five interceptions and 15 pass breakups in the past two seasons. He also has forced an incredible six fumbles.

McKinney received a first-round grade from the College Advisory Committee, which is a good sign he’ll go high. There were some plays this season where McKinney got ran over by a running back, but those were few and far between. He’s a versatile player that can play all over. He’s probably playing over K’Waun Williams because you’re not taking Jimmie Ward or Jaquiski Tartt off the field, though the injuries in the secondary make an even stronger case to draft a versatile athlete with football smarts like McKinney.