A bit more clarity has emerged on Jeff Wilson‘s recovery timeline. The 49ers’ recently re-signed running back is recovery from surgery to repair a meniscus tear, and the team is not expecting him back until the midseason point — at the earliest. 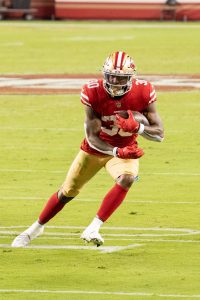 Wilson will miss at least six games this season, Matt Barrows of The Athletic notes (subscription required), adding that midseason will be the goal for the fourth-year veteran. This would suggest Wilson is a candidate for the reserve/PUP list, which shelves a player for at least six weeks to start the regular season.

The fourth-year back went down with the injury in May, but late September surfaced as a possible return window. That no longer appears to be the case. The 49ers have a Week 6 bye. A return for the team’s Oct. 24 game against the Colts would allow for Wilson to miss just five games.

San Francisco gave Wilson a one-year, $2.1MM deal in January. This allowed the parties to bypass the RFA tender process. The North Texas alum is due for unrestricted free agency in 2022. Wilson’s deal also came with $1.55MM in incentives; his injury will interfere with those potential earnings. The 25-year-old back suffered a high ankle sprain midway through last season but returned to lead the injury-riddled 49ers with 600 rushing yards. This included a 183-yard game against the Cardinals.

The 49ers also changed their running back depth chart considerably after extending Wilson. They signed Wayne Gallman, the 2020 Giants’ top rusher, and drafted Trey Sermon in Round 3 and Elijah Mitchell in Round 6. Raheem Mostert is expected to return as San Francisco’s starter, but he is coming off a multi-injury 2020 season. Like Wilson, Mostert is a 2022 UFA.