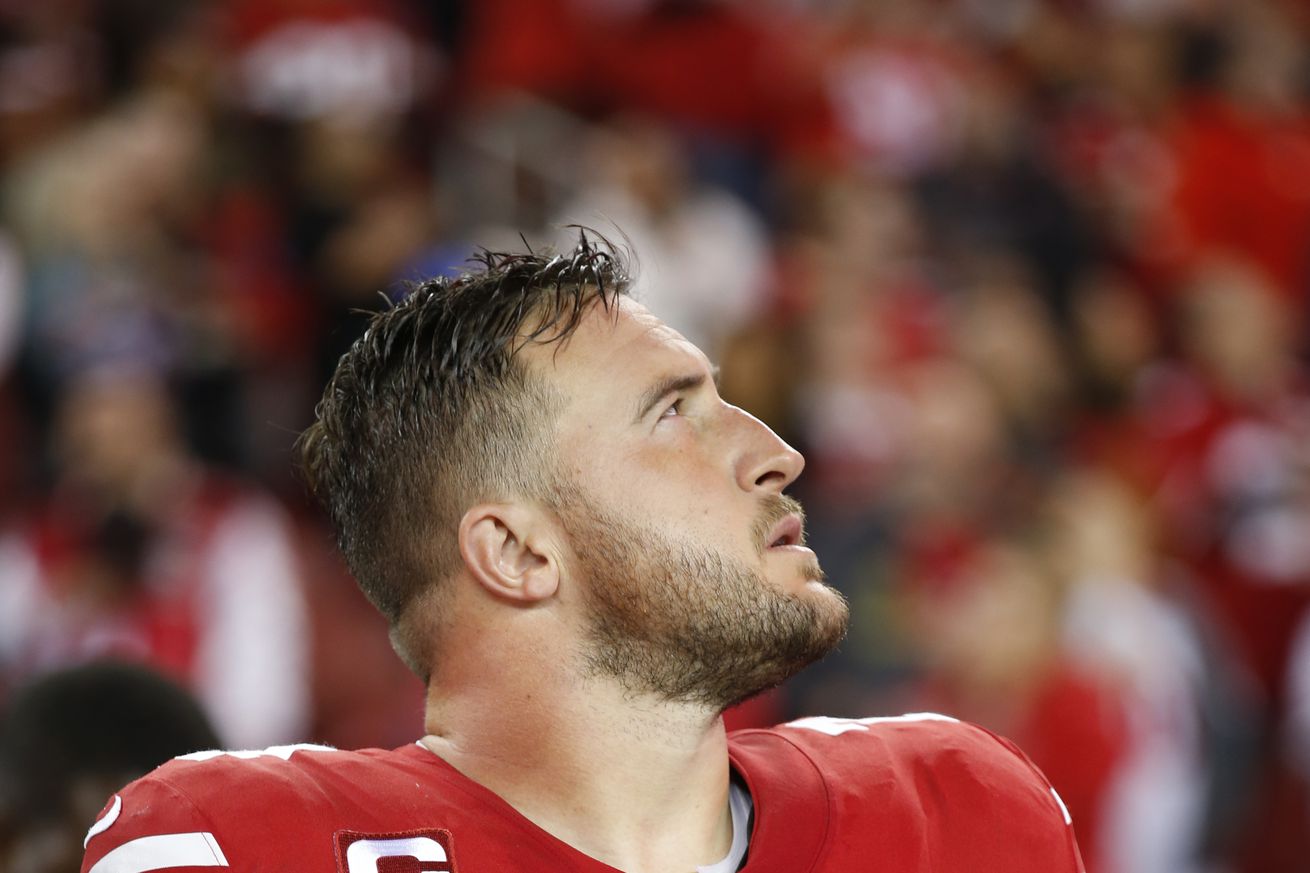 As the regular-season is all wrapped up for the San Francisco 49ers, we’re starting to see some rankings come out. Pro Football Focus recently released their offensive line rankings for the 2019 season, and the 49ers ranked 14th. Among playoff teams, the Niners are seventh. I feel like that’s noteworthy. For reference, Seattle is ranked 27th. Here is the blurb:

For pass-protection purposes, the 49ers will be glad to have Joe Staley back for their postseason run. Staley allowed just seven pressures in 240 pass-blocking snaps this season for a pressure rate of 2.9% that trailed only Ronnie Stanley and Taylor Lewan at left tackle. His replacement, Justin Skule, allowed a 9.2% pressure rate (fourth-worst at the position) despite Jimmy Garoppolo getting rid of the ball in less than 2.5 seconds on average with Skule in the lineup.

It’s been such a weird season for Joe Staley. He missed six games, which was weird in itself. Staley had a couple of rough games, see the first Seattle game and the Saints, but he had some dominant performances as well, like Week 17. When you get beat once or twice in a game, most people think you played terribly. Think about that. These guys play between 50-60 snaps a game, but if they give up a sack or a tackle for loss, fans are certain that the player played terribly. The margin for error for an offensive lineman, from our perspective, is so small as we only notice when they mess up.

I thought the guys that had to fill in this season played very well considering the circumstances. Ben Garland and Daniel Brunskill play through the whistle and compete on every snap. That’s all you can ask from your backups. Look at this play from Garland below:

That’s an extreme example, as Garland isn’t pancaking defensive lineman like that every snap, but it helps paint the picture. Honestly, on Brunskill, I would rather him start at right guard than spending a premium draft pick on an interior lineman. In Kyle Shanahan’s offense, your ability to pass protect is far more important than your ability to run block. Brunskill has played 474 snaps this season, and one person has gotten the best of him. That person is Aaron Donald. Just about everyone else that Brunskill has faced, the swing lineman has gotten the best of them.

Justin Skule didn’t look ready, and it’s tough to fault him. Skule wasn’t drafted to play in 2019. It was a tale of two halves for Mike McGlinchey, who allowed the second-most sacks behind Skule’s six. There’s no way to sugarcoat it, but he wasn’t playing very well early in the season. Against Green Bay and Baltimore, McGlinchey looked like an All-Pro and the player that San Francisco expected when they took him so high. The first six games for McGlinchey: 11 pressures, two quarterback hits, and three sacks allowed. The final six games: Six pressures, zero quarterback hits, two sacks allowed. There were far fewer mistakes and more impact blocks, as well.

The success of the 49ers running game this season is largely due to the offensive line. I’d go as far as to say that the running backs left a good chunk of yards on the field as they didn’t follow their blocks. When you factor in the different faces, in-game injuries, and losses on the season, the Niners offensive line played well this season. I know PFF didn’t grade him as one, but Weston Richburg was playing at a top-five level, and that’s not coming from me, it’s coming from a friend that consults for offensive lines in the NFL. You don’t lose a guy like Richburg, or your starting right guard, and run for over 100 yards in a division-clinching game. That’s a testament to this team.