The 49ers are set to bring back Josh Rosen (Twitter link via NFL.com’s Mike Garafolo). It won’t cost them much to retain the former first-round pick, who is tethered to the team as an exclusive rights free agent. 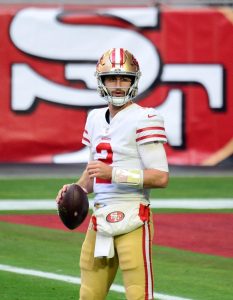 Rosen was cut by the Dolphins in early September and spent the bulk of the year on the Bucs’ practice squad. He has yet to impress as an NFL quarterback, though he has not been given the best of opportunities. The 2018 No. 10 overall pick struggled for the Cardinals — who ranked last in scoring and total offense in 2018 — and the Dolphins, who had perhaps the league’s worst roster in 2019. Rosen took over for Ryan Fitzpatrick in Week 2 and started the next three games that year, but Brian Flores didn’t really look back after giving him the hook.

The fourth quarterback selected in 2018’s five-QB first round, Rosen owns a career 54.8% completion rate and a ghastly 4.4 adjusted yards per attempt figure. He has thrown 12 touchdown passes and 19 interceptions in 20 career games (16 starts).

Still, there’s no sense in the 49ers giving up on the one-time Bruins star. Rosen won’t turn 24 until February, and the 49ers have him on the cheap.