Bad news for the Niners. Center Weston Richburg is done for the year thanks to a torn patella tendon, head coach Kyle Shanahan announced. 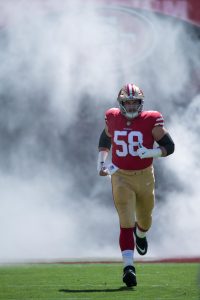 Richburg will be placed on injured reserve, leaving one of the league’s best teams without its anchor on the offensive line. He’s been a rock for the 49ers since joining the club on a five-year, $47.5MM deal prior to the 2018 season. In 2018, he played in 15 games despite an ongoing knee issue, which was addressed by surgery in January. Unfortunately, this knee injury will require another surgery and ample time to heal, ruling him out for the rest of the regular season and playoffs.

Last year, Pro Football Focus gave Richburg the lowest grade (51.9) of his five-year career. This year, he fared slightly better with a 59.8 score, but those numbers don’t quite reflect his importance to the Niners’ line. He’s allowed just one sack this year and the Niners rank No. 4 in total offense league-wide.

Without Richburg, the Niners will likely install Ben Garland as their starting center, starting this week. They’re also likely to look into some interior line reinforcements, starting with practice squad guard Ross Reynolds.