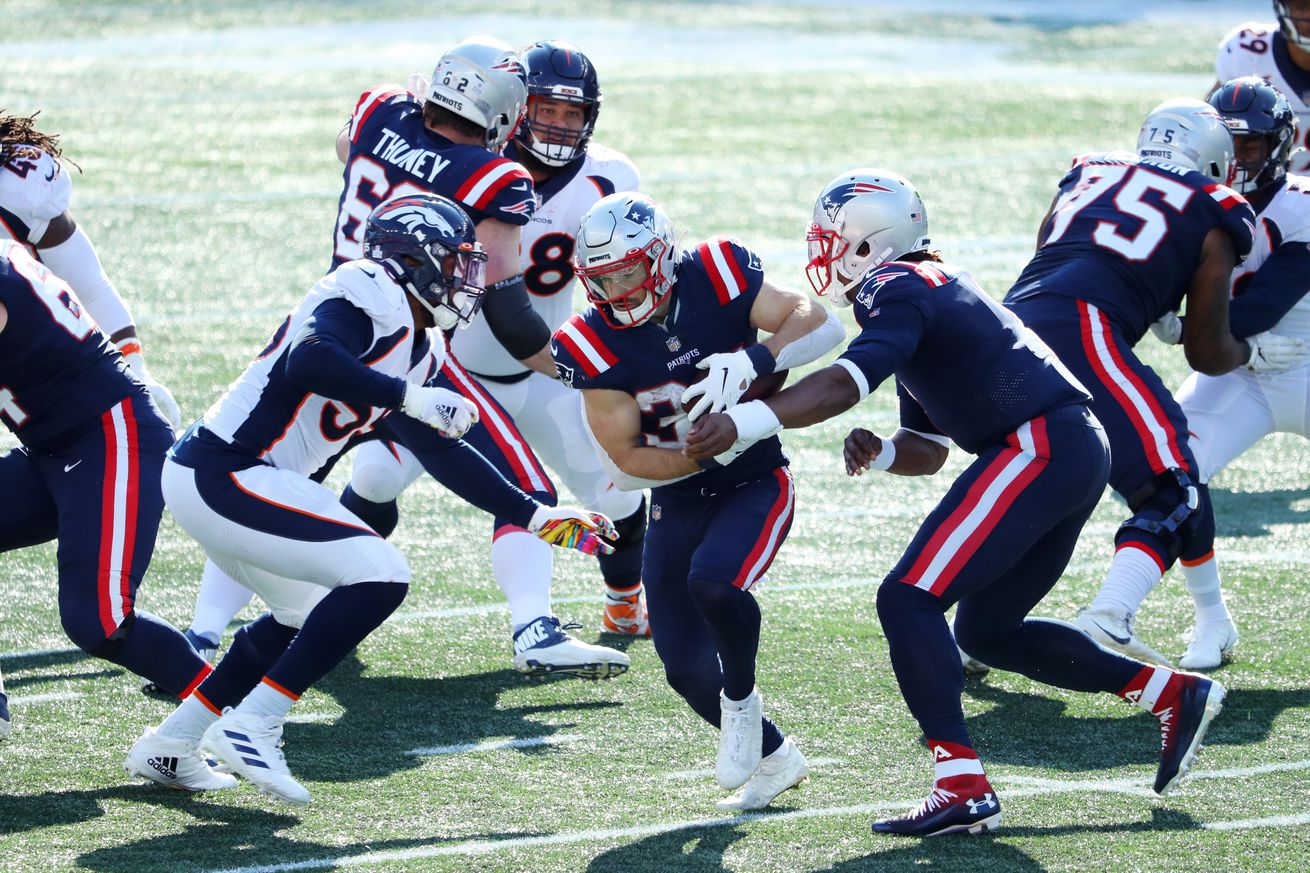 We also discuss New England’s defense, and if they have enough to beat the 49ers today.

The San Francisco 49ers are on the road to face the New England Patriots today. Managing editor Bernd Buchmasser—who is the best— of Pats Pulpit was kind enough to answer five questions ahead of Sunday’s matchup to understand better who this Patriots team is.

1) The 49ers have struggled to contain mobile QBs. Cam Newton is a different beast, but he still can hurt you with his legs—especially in short-yardage situations. We’ve seen Newton’s carries drop in each game. Do you think we see him carry the ball more against the 49ers?

One of the hallmarks of the Patriots’ game planning is the team’s ability to adapt in order to exploit any potential weakness the opponent might present. When looking at the 49ers and their issues at containing mobile passers such as Cam Newton, it therefore certainly makes sense for the team to incorporate more scripted quarterback carries. This also rings true because it would generally play into the strengths of New England’s offense: if the first four Newton-led games of the season — he missed one contest because of his Coronavirus diagnosis — the team’s offense functions much more efficiently when it can successfully establish a presence on the ground first and get the play-action game going.

In order to kickstart an offense that has struggled the last two weeks, I do believe the Patriots will try to go back to this formula — one that will include its fair share of quarterback runs. Being able to return to a normal practice schedule this week should help with this approach, as should the fact that the interior offensive line will be back to full strength following the returns of center David Andrews off injured reserve and right guard Shaq Mason off the Reserve/Covid-19 list.

2) The Patriots defense seems like the epitome of a “bend but don’t break,” but they’re also No. 1 in the NFL in turnovers per drive and just outside of the top-10 in drive success rate. They’ve lost some key players on that side of the ball with opt-outs before the season. Do you feel like the Patriots defense has over or underachieved this season considering the circumstances?

As you mentioned, the Patriots lost their fair share of starters or core rotational contributors this offseason: Dont’a Hightower and Patrick Chung opted out; Kyle Van Noy, Jamie Collins, and Danny Shelton left in free agency; Duron Harmon was traded to Detroit. In case you’re wondering, that’s six of the top-11 in defensive playing time from last season. Replacing players of that caliber is obviously not an easy task, but I would say New England has handled the adversity fairly well — especially because of a couple of reasons: Bill Belichick is still running the show, for example, and his scheme can mask a lot of deficiencies. Furthermore, the team’s secondary remained mostly intact and is still among the best in football. Lastly, the continued growth from players such as outside linebackers Chase Winovich and Shilique Calhoun has also helped the unit stay competitive this season. When it comes to your question, I would say that the unit has overachieved. Losing all that talent mentioned above could have thrown it back significantly. However, that has not happened so far.

3) There has been a lot of talk about Jimmy Garoppolo returning to New England. Many feel like Kyle Shanahan took the keys away from Garoppolo during the Rams game. Others feel like it was due to the Rams leading the league in sacks. From an outsider’s perspective, how do Patriots fans feel Jimmy G has done this season and is there any regret on the decision to trade him?

I’ll start with the first part of the question because it has been debated quite a bit in New England throughout the years. I think people are quick to point to the offense’s struggles recently and say that the team should have kept Garoppolo, but that’s a pretty one-dimensional point of view, in my opinion. After all, the Patriots would have had to either pay both Brady and Garoppolo after the 2017 season while convincing the latter to stay as a backup despite getting start-now offers, or part ways with Tom Brady at the peak of his powers the following offseason. That’s what it all comes down to, and I personally can’t fault the team for trying to get something out of its former first-round investment while it still had some value to hold onto. The Patriots winning the Super Bowl again, not even 16 months after the trade, also speaks for the results.

As for Garoppolo’s season so far, I can’t speak for Patriots fans on the whole. That said, I do think that him not yet developing into one of the NFL’s elite passers — despite some very good moments and him leading the Niners to the Super Bowl last year — helps fans cope with the trade a bit more even as the team is trying to replace Tom Brady.

4) It’s no secret that the Patriots receivers have struggled and held back the offense this year. Generally, teams with speed and playmakers give the Niners the most trouble on defense. How much success do you think New England will have in the passing game Sunday, and do you think the struggles will continue for the rest of the season?

New England’s pass-catchers have been a weak point of the offense going back to last year, so the current situation is nothing new for the Patriots. The hope, however, has to be that the team’s young receivers — e.g., former first-round wideout N’Keal Harry, the team’s two rookie tight ends — improve as the team gets back to more practice time after having been able to practice only twice over the three weeks before last Sunday’s game against Denver. Determining the long-term based on the early parts of the season is therefore difficult, but unless the personnel shows some improvements, it could be a difficult season for New England’s passing attack. As for Sunday, it is equally hard to predict what will happen.

The unit did look good against the Seattle Seahawks in Week 2, so maybe going against a secondary missing some key personnel may help return to those levels. Realistically, however, I think we will see more of what we have seen from the group thus far: some ups and some downs, and plenty of usage in run-blocking. Whether or not all of them are enough to beat San Francisco remains to be seen.

5) The last time Bill Belichick lost three games in a row, Nelly, Eminem, and Linkin Park were on top of the charts. How confident are Patriots fans heading into Sunday’s game, and what do you think will be the reason they win?

Judged by SB Nation’s latest Reacts survey, 58 percent of Patriots fans are feeling good about the team heading into the game — the lowest confidence score since free agency. I do think Patriots fans are cautiously optimistic, though, considering that the team has had a normal week of preparation and no new Covid-19 cases. I also believe that they feel confident in the defense’s ability to make life hard for Jimmy Garoppolo on Sunday and that that might eventually tip the scales in New England’s favor. And I do think that’s the case as well if we’re going to the reasons for a New England win. If they can force Garoppolo into mistakes and simultaneously also build on their defensive performances from the last two weeks by playing tight man coverage and generating pressure with four — all while returning to a run-based offensive approach that incorporates Newton as a ball carrier — I do believe they can win. Will it be easy? Of course, not. But I have learned to never count against a Belichick-led team.