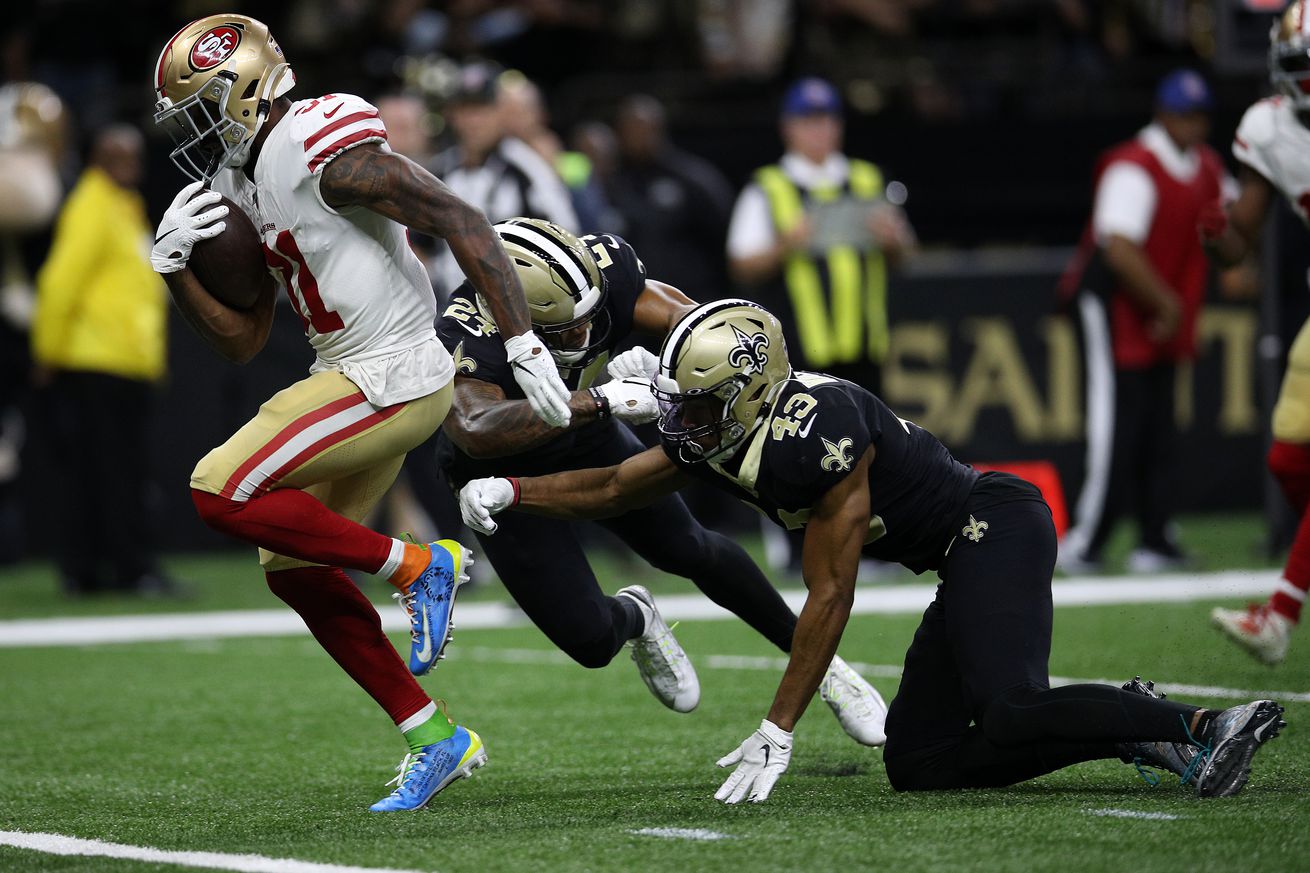 Yes, I went with that title. I’m lame and like dad jokes. Big whoop. The important thing here is the fact that Raheem “The Dream” Mostert has quickly become our most reliable and effective running back. Mostert lead the backfield on Sunday with 38 snaps. Matt Breida had 12 snaps in his return from injury, and Tevin Coleman received 10 snaps.

Coleman still got the start against the New Orleans Saints, but his 2 yds/carry average over the last 4 games has forced Shanahan to limit his touches. I expected to see a lot more of Coleman in the passing game this season, which is supposed to be his strength, but it seems he’s become more of an afterthought. Breida, on the other hand, has been electric with the ball in his hands, with the speed and vision to find cutback lanes and gash defenses, but his size and injury concerns make him better suited as a change of pace guy. That leaves us with Mostert, whose patience and burst has lead to a league best 6 yds/carry (out of RBs with at least 100 carries), and a team leading 608 yds on the season. Here’s what Shanahan had to say:

“Raheem’s earned it over these last few weeks. I mean, how many games can you go and how many years can you go averaging six yards a carry, somewhere in there? I mean, we keep trying to balance it out and stuff, but what Raheem has done these last few weeks and has continued to do, we need to give him more opportunities. He’s given us no choice. I’m happy for him and it’s been great. He’s been extremely impressive.”

Looking forward, Jerick McKinnon and Coleman can (and should) be cut before April 1st to avoid any guarantees kicking in. Breida is set to become a Restricted Free Agent and Jeff Wilson Jr will be an ERFA, with Mostert signed through the 2021 season. How do you think the 49ers should approach the position this offseason?

On to those links…

The 49ers are a revelation but the NFL’s ridiculous seeding could kill them (Melissa Jacobs, The Guardian)

The Starting 11: The Offseason Acquisitions That Are Shaping the NFL Playoff Race (Robert Mays, The Ringer)

The Winners and Losers of NFL Week 14 (Rodger Sherman, The Ringer)

NFL Week 14 grades: Broncos get an A+ for beating down Texans, Eagles get ‘C+’ for OT win over Giants (John Breech, CBS Sports)