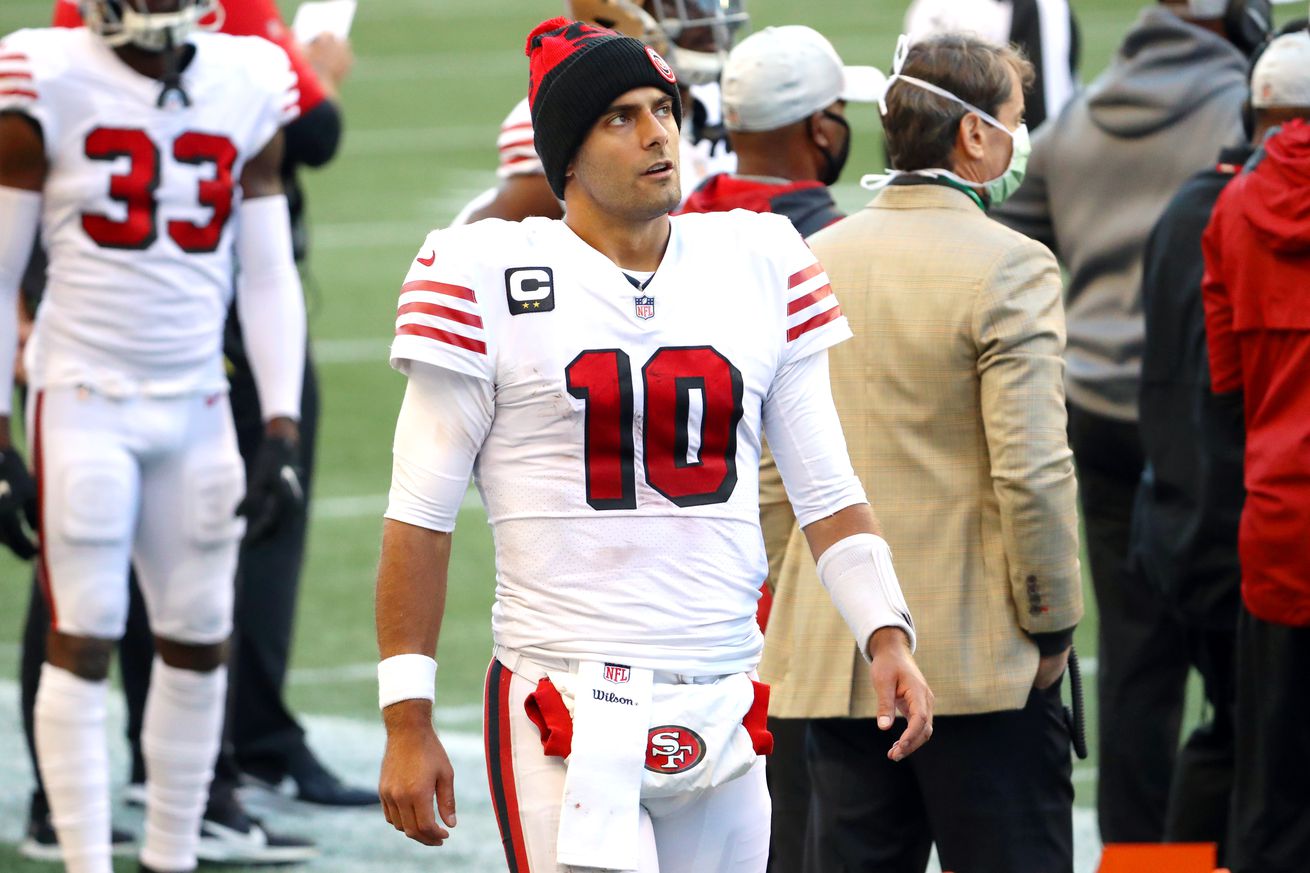 Friday afternoon, the 49ers announced they activated Brandon Aiyuk, Kendrick Bourne, Deebo Samuel, and Trent Williams from the Reserve/Covid-19 List. Those four are now eligible to play Monday night against the Packers. Oh, the game wasn’t postponed as it should have been? Why? Money? Ah, that’s far more important. Gotcha.

The best overall linebacker, however, might be Fred Warner, who leads the group in picks and passer rating in coverage, while performing ably as a blitzer. Add in high-level run defense and you have the complete package.

Jason Verrett has been healthy enough to play so far this year and is showing why he was a great steal for the 49ers, a team suddenly in dire need of its defense to carry games. His ability to shut down his assignment has allowed the 49ers to play 10-on-10 on defense and it’s producing results.

“Good news from the doctors that none of them are recommending surgery right now,” Shanahan said, via Jennifer Lee Chan of NBCSportsBayArea.com. “So we are not going do anything for this four to six weeks. Rest it, and then we will re-evaluate and hopefully, it heals up the way the doctors are anticipating and he will be good to go then, and not need surgery.”

Garoppolo originally injured his ankle Week 2 against the Jets. He missed two games and returned for four before re-injuring the ankle.

Shanahan described it as a second, more severe sprain on the same ankle.

So maybe Garoppolo has taken his final snap in San Francisco, but maybe not. If Garoppolo becomes healthy enough, his return could hinge on whether the 49ers still are in the race for a playoff berth.

49ers get needed good news with negative test for Bourne

Receiver Kendrick Bourne tested negative for COVID-19 for a second straight day Friday, clearing the way for him and close contacts Brandon Aiyuk, Trent Williams and Deebo Samuel to return to the team.

Unfortunately for the 49ers it’s too late to help this week because San Francisco already played Thursday night and lost 34-17 to the Packers.

“I know it’s frustrating, but it is what it is,” coach Kyle Shanahan said Friday. “That’s what everyone in this world’s got to deal with right now. They’re doing that for the safety. Unfortunately, it wasn’t necessary, but I get why it did happen. So, got to deal with it and we obviously dealt with that last night. So, hopefully it won’t happen going forward.”

Did the 49ers swing a local California election?

Millions of dollars spent by San Francisco 49ers CEO Jed York appear to have successfully swung local elections in Santa Clara, California – and changed the makeup of the city’s council, which York’s Niners have sparred with for years.

Three of four candidates backed by York, whose family owns the Niners, won Santa Clara City Council seats this week, ousting an incumbent and two other establishment choices in the process.

They won, in part, because York poured roughly $3 million into their campaigns. York’s money accounted for around 90% of all spending on city council campaigns. It amounted to roughly $50 per registered voter, and roughly $150 per vote in the four city council races combined.

The 49ers would love an offense where the quarterback can work off the fantastic pre-and-post-snap motion in the Shanahan run game. It’s hard enough to figure out where the running backs are going in this scheme, if you mix in a running quarterback behind them, the options are endless.

Fields and Lance are expected to be top 10 picks, but the 49ers’ record at the midway point of the season and the loss of Garoppolo and George Kittle for an extended time (if not the entire season) could push them down in the win column enough to have a serious chance at the elite quarterbacks not named Trevor Lawrence in the 2021 draft class.

If it’s a pick outside the top 10 when the 49ers’ come on the board in late April, there are still quarterbacks talented enough to intrigue the team.

BYU’s Zach Wilson, Florida’s Kyle Trask and Alabama’s Mac Jones are each putting together seasons that should excite scouts with the traits and production to warrant first-round consideration.

Who was good, who was bad for 49ers vs. Packers

Harris stepped in for Jaquiski Tartt, who went out with a foot injury, and quickly surrendered a 52-yard touchdown. That was the only time he was targeted all night, but the Packers immediately picked on him when he got into Thursday’s game.

Injuries in the 49ers backfield were supposed to push Hasty into a featured role. He wound up playing just 14 snaps against Green Bay and logged four carries for three yards, along with two catches for 10 yards. He had his best run of the night called back for holding. Perhaps it was simply a lack of opportunity, but Hasty was disappointing Thursday.