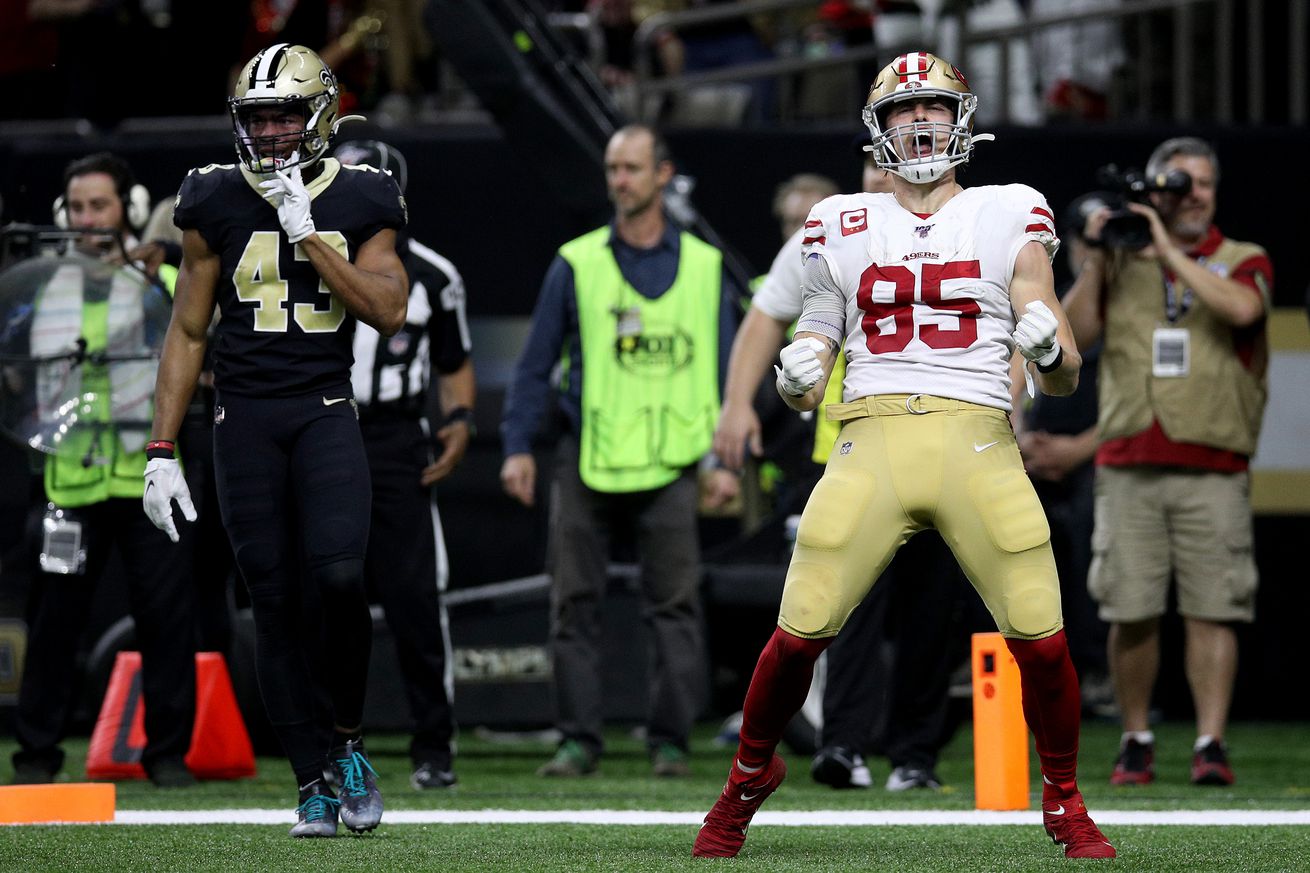 On a day where the defense failed to stop much of anything, Jimmy Garoppolo turned in the best game of his career, leading the 49ers to a 48-46 win over the New Orleans Saints. Injuries marred an otherwise exciting game with Jaquiski Tartt’s absence being felt early and Weston Richburg going down later in the game. In place of Richburg, Ben Garland had a shaky start but managed to get his legs under him en route to a solid game where he was regularly seen getting to the second level to help clear the way for the 49ers players. The 49ers also lost Dee Ford after he re-aggravated his hamstring injury and K’Waun Williams went down with a concussion. Shanahan is expected to give updates on the injuries later on Monday.

This was a particularly emotional victory for the team as it occurred the day after the one year anniversary of the passing of Jed York’s brother, Tony, who took his own life on Dec. 7, 2018. “TY” decals were worn on helmets in honor of his memory and game balls were handed out to each member of the York family after the game.

“It was an emotional beginning of the week, and I tried to get that out,” Jed York said. “My brother liked to party and have fun and celebrate. So you had to celebrate… Tony was just cool. He’d be smiling, probably have a hurricane. That’s Tony.”

** If you or a loved one is struggling with depression and are having suicidal thoughts, please please please do not hesitate to call the National Suicide Prevention Hotline at 1-800-273-8255. I know this is a rather serious note to take after an exciting game, but this is an important issue. Suicide is never the answer.

On to those links…

This one meant more.

49ers’ epic win over Saints about family as much as football (Jim Trotter, NFL.com)

Jimmy Garoppolo Finally Lived Up to His Promise—and Saints-49ers Lived Up to the Hype (Danny Heifetz, The Ringer)

Emmanuel Sanders on 49ers win vs. Saints: ‘That was a dogfight’ (Peter Panacy, 49ers Webzone)

What we learned from Sunday’s Week 14 games (Around The NFL, NFL.com)