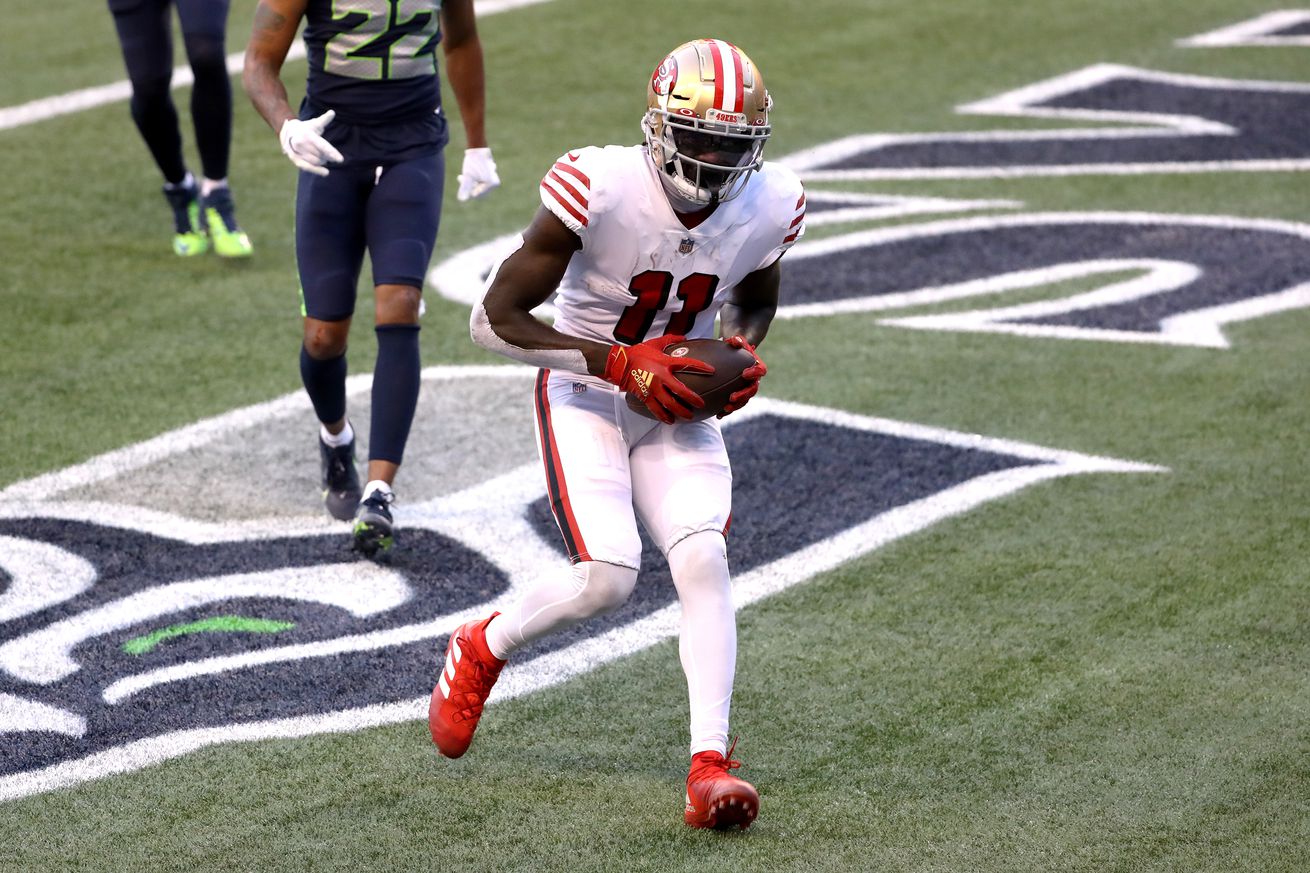 The best three performers were taken from each position group.

Due to the lack of noteworthy stats, offensive line was excluded. All stats are from pro football reference. This is part one, as I’ll be back with defense later today.

The San Francisco 49ers 2020 season has been quite the disappointment. Almost every notable star is somehow injured. Jimmy Garoppolo appears to have taken a step back, and a team coming off a promising Super Bowl appearance is likely to miss the playoffs entirely. The season seems all but lost, but we must still draw positives from a tough situation. One way of doing that is by identifying the strengths and weaknesses showcased this season by the various position groups.

Kyle Shanahan is simply the “run guru” of his generation. Even with his starter(Raheem Mostert) missing multiple games, Shanahan has still conjured up a pretty good run game centered around his back up’s. What makes the achievement impressive is how all the offenses at the 49ers’ level or outperforming the 49ers in the run game either have a star running back (Aaron Jones, Dalvin Cook, Alvin Kamara) or a QB helping pile up yardage(Wilson, Murray). Imagine what the stats would look like if he had Mostert for every game or had a QB who could use his legs.

Inter division rivals perform strongly here due to the fact each NFC West coach employs strong run game principles for different reasons, whether it’s Kliff Kingsbury or Sean Mcvay to set up play-action to help their young (in Goff’s case limited) QB’s. At the same time, Pete Carroll is a defensive-minded head coach who likes to control the time of possession even though the current “let Russ cook” hype train.

The above graph shows the value of having a mobile quarterback. They usually gain more yards per carry than running backs while adding another wrinkle to the offense. For someone like Shanahan, who routinely plays a fullback, a mobile QB would provide him with three running option threats, which would greatly help open up the passing game as defenses will overcommit to stopping the ran. Raheem Mostert places strongly here despite him missing multiple games, while Jerick McKinnon has shown the ability to be a great 2nd option.

Looking at the chart, you can’t help but feel bad for the two most gifted coaches in this division notice the two QB-RB combos. McVay is sadly tied to an immobile quarterback for the foreseeable future. Still, Shanahan should look to move on to a mobile QB to further build on what’s undeniably his greatest strength.

This is where the Seahawks separate. Russell Wilson is a whole nother cluster of greatness ahead of everyone else in the NFC West, his in division peers group with decaying Hall Of Fame QB Drew Brees and hero ball Matt Stafford, the 49ers place well considering they’ve been rotating their starting QB but don’t appear to have the QB on the roster whose special enough to separate them from the pack while Kyler Murray is placing strongly in his 2nd season and should continue to make the push right as his career progresses.

I have already covered Garoppolo in-depth, and in summary: He is not the guy. Goff and Garoppolo play under clear-cut offensive geniuses, and this is how they place? Who are they without their magical play-callers? Murray is showing tremendous potential right now, and Russell Wilson is literally floating over other Hall of Fame QB’s. Shanahan (and McVay) can’t continue pulling YAC from without compensating for their QB’s. As Andy Reid did with Mahomes, they should invest heavily in someone who can run their offense to perfection. A side note is Kyle Allen available this offseason? Because wow.

Blood on Bill O’Brien’s hands for unnecessarily adding another problem for the Niner’s secondary to deal with for no good reason. Nuk is something special, and John Lynch needs to quickly find this team another elite receiver to go with Kittle. Brandon Aiyuk being in a cluster with Cooper Kupp and Robert Woods, bodes well for his future. However, I still think he’s a great #3 receiver while being an okay #2, and, to be honest, there is a clear special zone that none of the 49ers receivers are touching this season. Kittle had an 80% catch rate last season, so he can do it but just hasn’t this season; as the Niners only perceived receiving threat, he gets special attention from defenses and to counter that Aiyuk needs to have the leap, or they need to move some assets to get one.

The injuries have been a curse, but maybe the only silver lining is that it’s caused people to cool on Robert Saleh, and that might keep him around for another year, which would be great as even through the injury crisis, his unit has remained pretty solid.