Despite Deebo Samuel arriving at 49ers minicamp, Trey Lance has not had the chance to work on his rapport with San Francisco’s top receiver. However, Lance has had ample opportunity to build a promising connection with a less-heralded receiver in Jauan Jennings, whose development could prove critical to the quarterback’s hopes of efficiently adapting to life as a full-time NFL starter.

Jennings, a seventh-round pick in the 2020 draft, emerged down the stretch last season as San Francisco surged to a 10-7 record with a run that took them to the NFC Championship Game.

He caught 24 passes for 282 yards and five touchdowns in 2021, with his breakout game to this point coming in Week 18 when the Niners clinched a playoff spot by beating the Rams 27-24 in overtime.

Jennings had six catches for 94 yards and two touchdowns in that thriller, saving his best performance for the most important game of the regular season.

Only four of Jennings’ 24 receptions last season did not result in a first down or a touchdown. Fifteen of his catches led to the 49ers moving the sticks.

In other words, Jennings was a reliable target who dealt almost exclusively in significant catches. The early signs from the offseason program suggest he could take on an even more important role in 2022.

The Athletic’s Matt Barrows described Jennings as San Francisco’s “most prolific receiver” on day one of minicamp, crediting him with three touchdown receptions in the red-zone drill.

Afterward, Jennings received praise from teammates and his head coach.

“He’s a great route-runner,” new 49ers cornerback Charvarius Ward said in Tuesday’s press conference. “He knows how to work his leverage. He does what the coaches tell him to do. He’s just a gamer. Once he puts on the helmet and straps those shoes on, he’s a good player.”

Kyle Shanahan echoed Ward’s sentiments about Jennings as a route-runner, praising the separation ability of a player of Jennings’ 6ft 3in and 212-pound frame.

“I’m extremely confident in Jauan,” Shanahan said. “I think if anyone watched our games at the end of last year, not many people covered him. He got open, he had aggressive hands, he got up the field, he blocked well. Jauan was a guy we had a lot of hope for coming into stuff. He had some setbacks with injuries, but once he got healthy and he got his opportunity when Mo [former WR Mohamed Sanu Sr.] went down last year he took off.

“He does have a bigger body, but he plays big. He’s fearless going over the middle, but that doesn’t matter if you can’t separate. And what’s cool about Jauan, he’s got some unique running styles, but just watch him, he separates more than probably all the other guys.”

Shanahan lauded the offseasons both Jennings and WR Brandon Aiyuk have put together. A rapport between Lance and Aiyuk was already becoming apparent when Lance started in the Week 17 win over the Houston Texans. Though it is clearly important Lance becomes comfortable with all his receivers, a connection with Jennings could be particularly advantageous.

Having witnessed his consistency in producing first downs and success in coming through in the clutch last year, Lance should not lack trust in Jennings, whose frame and catch radius is a benefit for a team transitioning to a quarterback who is more aggressive and throws the ball with more velocity than Jimmy Garoppolo.

Lance can also have confidence in Jennings’ ability to win 50-50 balls, as he critically did for Garoppolo in overtime of the Week 14 win over the Cincinnati Bengals, with his size creating natural mismatches when the 49ers line him up in the slot as they did at times last year.

It can be easy to read too much into minicamp practices and offseason plaudits. However, if Jennings is developing as Shanahan suggests, then he could be a major factor in 2022.

Between Shanahan’s play-calling, Samuel, and tight end George Kittle, Lance is entering an offense that is stacked with ‘easy buttons’ to simplify his transition to starter.

As a physically imposing receiver who can separate, win at the catch point and in the red zone, and create a high volume of big plays, Jennings has the potential to be another.

The 49ers drafted Lance in the hope he could raise their ceiling on offense. Jennings’ progress is another possible route to San Francisco raising Lance’s floor.

49ers offseason roster: Writing on the wall in QB room 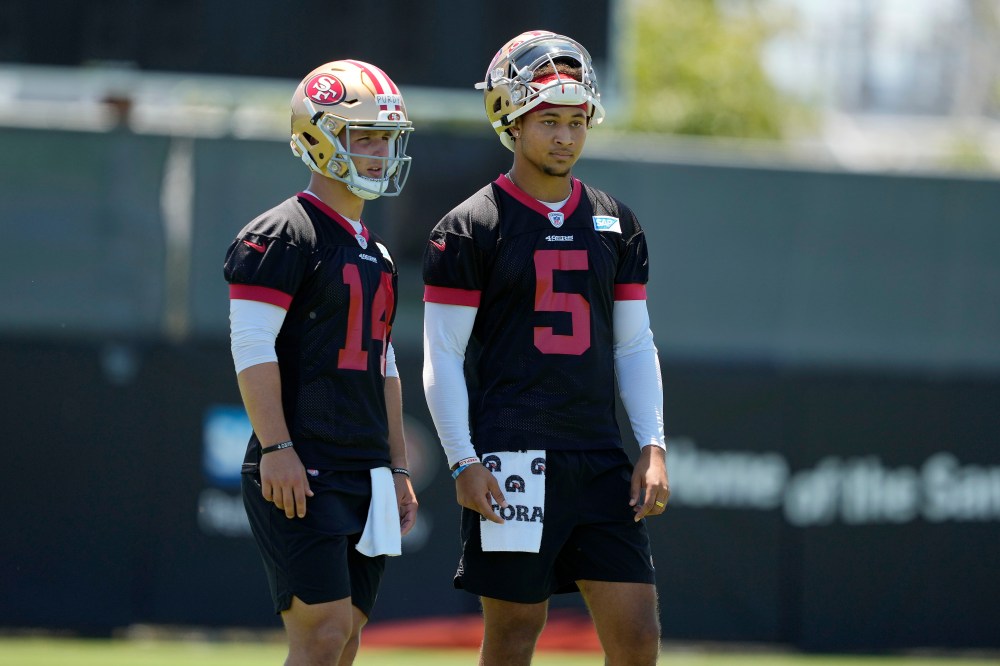