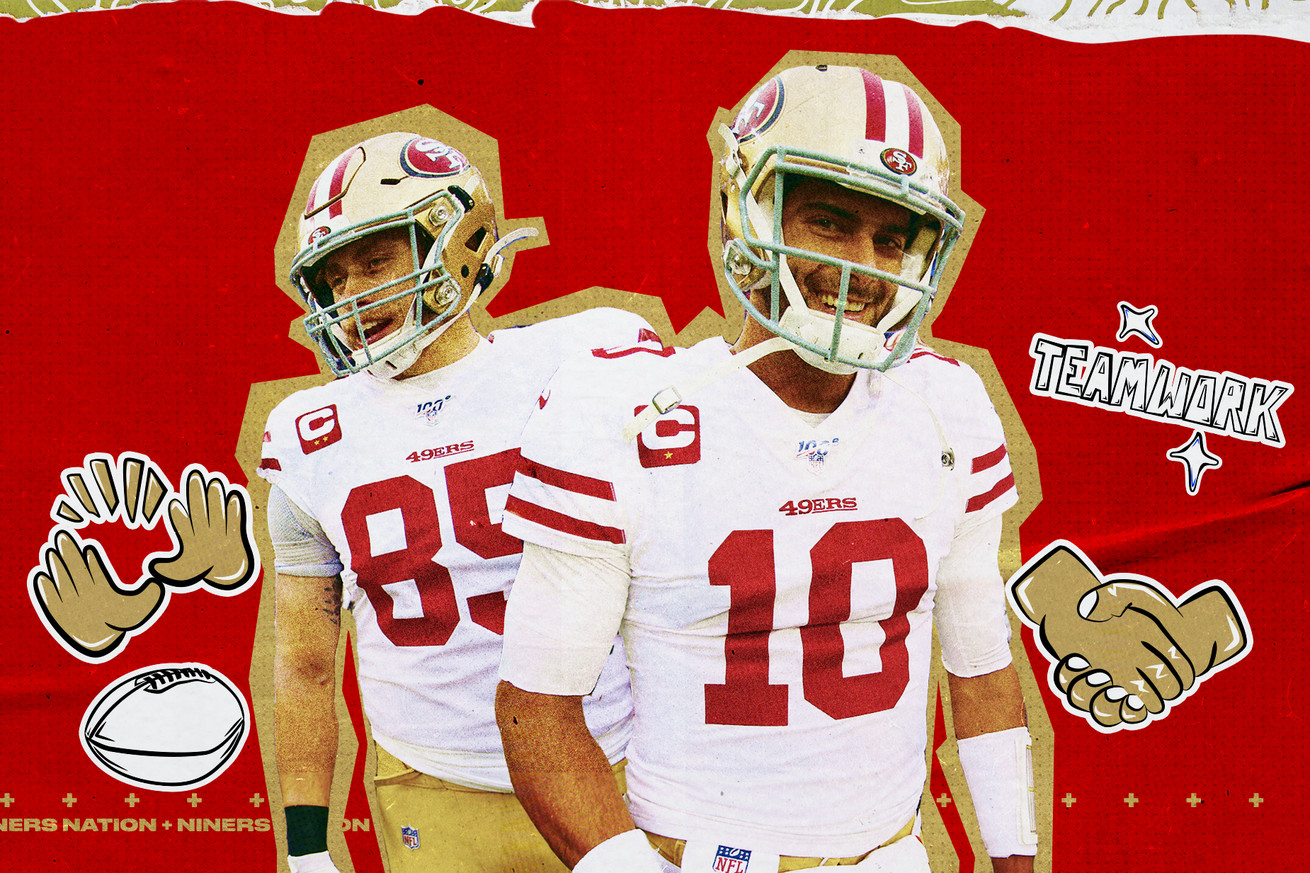 The BFFs off the field make for a great duo on the field.

The bromance between San Francisco 49ers quarterback Jimmy Garoppolo and the team’s star tight end George Kittle makes it easy to root for the Niners and the duo themselves.

During most of their press conferences, you’ll often find them wearing matching hoodies with each other’s names on them:

Who was the creator of National Tight Ends’ day? Jimmy Garoppolo. How did that come about? I thought you’d never ask.

That’s one of several examples that make Kittle and Garoppolo’s relationship special. They each trolled each other this past offseason as training camp was underway. Jimmy G showed up to practice in this Kittle t-shirt, that had a picture of Garoppolo on it:

This has all unfolded during the past year, but the two have built a relationship thanks to a certain mentality that both players share—from a position that neither play.

General manager John Lynch said this about the two:

That mentality is what kept Garoppolo on the field during the 2020 season, where he came back a couple of weeks before most players who have suffered a high-ankle sprain would be able to return.

The injury may have impacted Garoppolo’s performance and ability to play to his full potential, but your teammates appreciate a guy who is willing to play through pain. Kittle— who is likely out for the 2020 season with a foot fracture—told head coach Kyle Shanahan that he would only miss two weeks because “that’s how he rolls.” Garoppolo and Kittle share the same mentality, and were often on the same page during 2019.

Kittle caught 79% of his passes during 2019, which resulted in 93 receptions for 1,124 yards, and 58 first downs. Over half of Kittle’s yards came after the catch. The dynamic duo started the season hot, and rode that into the playoffs. 49ers fans are enamored with the love fest between these two off the field. Honestly, the two joking around never gets old.

Sure, they make a great duo on the field. When you see the public events they’ve shared off the field—from chugging beers at WWE events to Kittle constantly calling out Garoppolo for being a terrible texter—the admiration is clear. In October, I asked Kittle what’s one thing he can’t stand about Garoppolo. His answer wasn’t surprising, but it was hilarious:

I asked 49ers TE George Kittle, what’s one thing you can’t stand that Jimmy Garoppolo does off the field. content# pic.twitter.com/0TaaOB9mKP

Respect goes a long way in life. We have no idea what will happen with the future of Garoppolo. What we do know is that he’s respected in the locker room and by the best players on the team. No matter what happens, Garoppolo and Kittle’s bond will last, and that’s the sign of a great friendship.