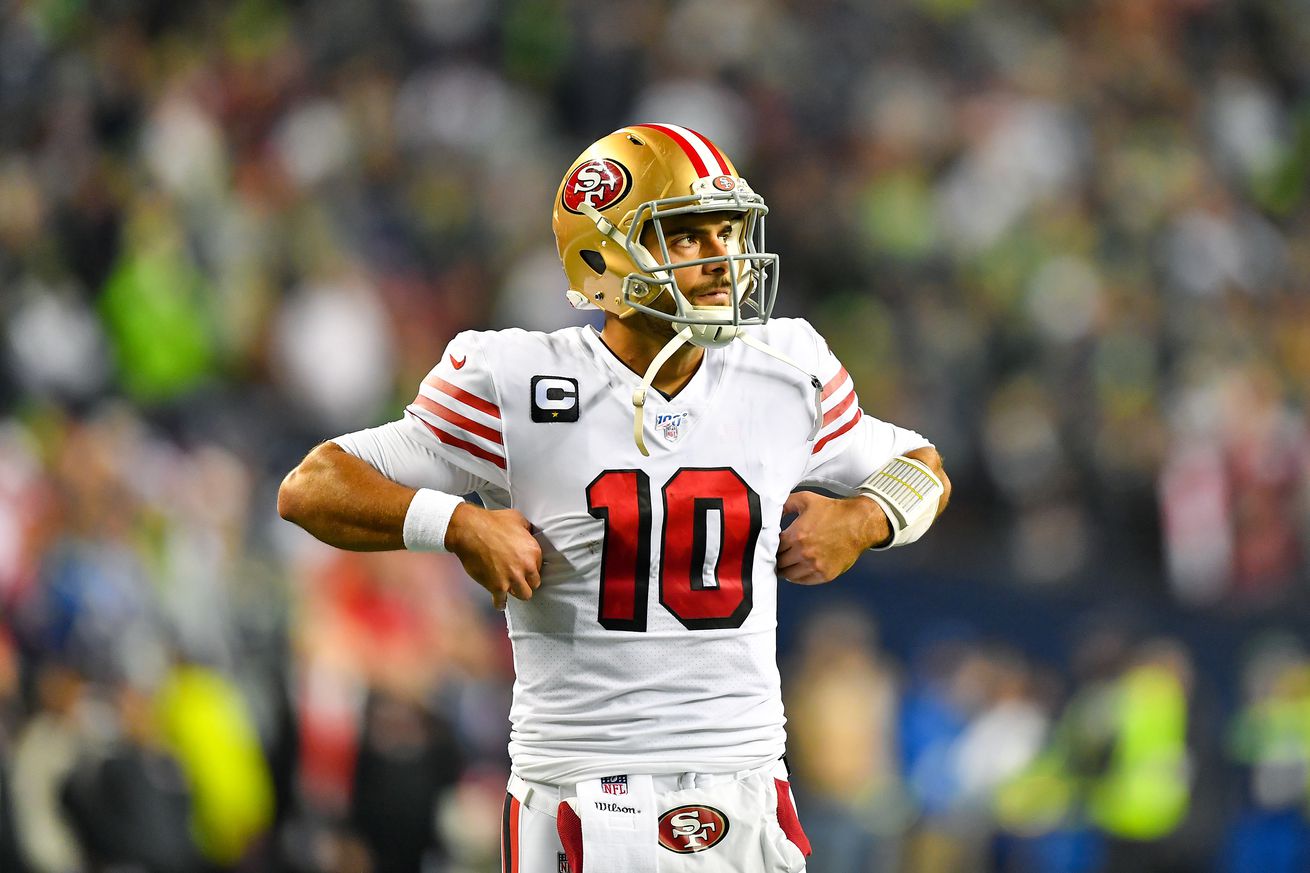 Any questions about him leading this team can be put to rest.

In many ways, Jimmy Garoppolo outplayed Russell Wilson on Sunday. Yes, Wilson has two more touchdowns than Garoppolo, but Garoppolo walks away with the better passer rating, completion percentage, and yards. This is also a game where the Seattle Seahawks offense took two quarters to get going.

There’s been a lot of questions about Jimmy Garoppolo, and I think it’s safe to say a lot of those questions have been answered: he is the guy. Is he an elite, top-5 quarterback? No, not yet. But he’s getting there. The biggest argument I’ve made for Garoppolo is time. He needs time to screw up. Down the stretch, he’s developed nicely.

For Seattle, Garoppolo went 18 for 22 (81 percent), 285 yards, and a passer rating of 118.7. It sounds pedestrian, but look at how other quarterbacks do in Seattle; it’s impressive.

And now that fun part of the show: Garoppolo’s final 2019 regular season numbers:

So, a knee injury and his first full season as a starter. That is pretty darn good. Garoppolo ranks third in yards per attempt, fourth in completion percentage, 12th in yards, sixth in touchdowns, eighth in interceptions, and eighth in passer rating.

Those rankings are nothing to sneeze at. Especially again: return from injury, minimal football experience. He’s better than half the league in several categories. Yes, his interception totals are high, but a lot of those can be blamed on 49ers receivers failing to catch the ball. He is just 24 yards behind the Green Bay Packers’ Aaron Rodgers.

Speaking of Rodgers, we all know I’ve been hot on comparing Garoppolo’s 2019 numbers to Rodgers’ 2008 numbers. 2008 was Rodgers’s first-year starting in Green Bay after Brett Favre’s first retirement, and Rodgers quickly made a name for himself. Here’s how Rodgers finished 2008:

Jimmy Garoppolo outplays Rodgers here in several categories. Is it the fairest of comparisons? That’s up to you. The point is Garoppolo needed time, and his stumbles this year were something to be expected. I hope everyone saw those throws and windows he fired into last night and realize the ceiling has yet to be realized.

So the question comes with that (tired and ridiculous) narrative of if the 49ers keep him around. Um yeah? I don’t know where all this came from, but given what is seen here, you keep Garoppolo in there. First, Kyle Shanahan’s offense takes one-two years to learn. Does anyone really want to go back to that, a quarterback learning the offense? Secondly, Garoppolo had a ho-hum 2018 that led into some head-scratching in 2019, but we saw steady improvement as the season went on.

Is this just a special season, and Garoppolo regresses? Maybe. But if you look at other teams with those one-year playoff runs, not much is typically asked of the quarterback. A good example is the 2017 Jacksonville Jaguars, who had consistent defensive play throughout the entire season. Blake Bortles started OK, but whenever he was asked to dig the Jaguars out, it led to some mixed results (see Jaguars vs. 49ers 2017). The 49ers have turned to Garoppolo numerous times to either dig them out of a hole or to go win the game, and Garoppolo has delivered numerous times.

The sky is the limit, and some postseason experience is just what he needs. It’s safe to say it’s a successful first full season for Garoppolo, and he’s only going to get better.