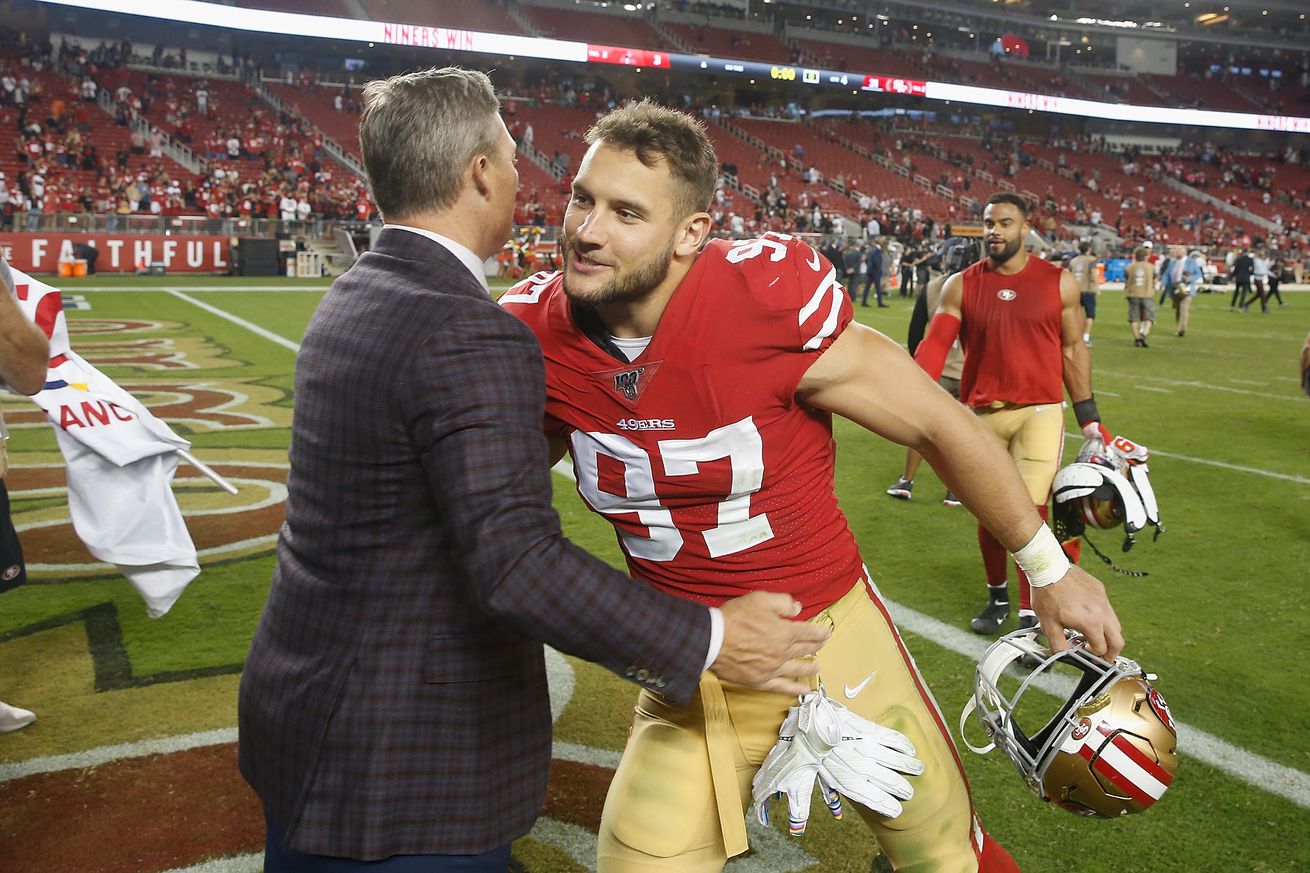 As 49ers’ rookie linebacker Dre Greenlaw stopped tight end Jacob Hollister and San Francisco clinched its first NFC West title since 2012, general manager John Lynch was too busy hugging head coach Kyle Shanahan. The 49ers’ power couple watched the team that they carefully constructed like a puzzle demolish a demon in San Francisco’s house of horrors, and they could finally breathe a sigh of relief.

When Lynch and Shanahan took this team over in 2017 — it was coming off of a pair of demeaning seasons that signaled a full-blown rebuild. The duo preached patience to a fan base that’s prided itself on winning, and three seasons later, the 49ers are 13-3 and two wins away from their second Super Bowl berth in the 2000s.

Despite only tallying six wins in their first two seasons, Lynch knew that his team was capable of delivering a magical season, given their litter of draft picks in April and their deep pockets heading into free agency.

The open signing period delivered a host of talent — from linebacker Kwon Alexander to running back Tevin Coleman to pass rusher, Dee Ford. Yet on Sunday, in the season’s most pivotal moments, it was not the free-agent signings that were helping the 49ers overcome the Seahawks, it was the depth that Lynch added in this past draft.

After whiffing on first-round picks Solomon Thomas and Reuben Foster in 2017 and then wideout Dante Pettis in 2018, Lynch needed to respond with a deep draft to replenish the 49ers’ depth in what turned out to be a long, injury-filled season.

Oh man, did the former TV announcer answer the bell. With eight selections in this past draft, Lynch delivered multiple starters and depth pieces — including potential superstars in defender Nick Bosa and wideout Deebo Samuel.

It became abundantly clear early in the season that the 49ers’ first two picks were going to be an integral part of San Francisco’s core and if Shanahan’s team were going to make a Super Bowl run, Bosa and Samuel would need to live up to their pre-draft hype.

With all the marbles on the line on Sunday, the former South Carolina receiver finished with five catches for 102 yards (team-high) and carried the ball twice for 33 yards, including a touchdown run capped off with a spin move to dust off multiple Seahawks’ defenders. San Francisco’s offensive play-caller moved Samuel around the field like a queen on the chessboard, and Pete Carroll’s once-vaunted defense had zero retaliation.

The past draft was filled with well-performing receivers, but San Francisco ended up with one of the more versatile players that fit their precision, timing-based passing attack.

This reflected in the fact that Samuel is second in the NFL in yards after the catch per reception (YAC/R) at 8.5.

Maybe a passing attack that requires accuracy and timing is important?

About those air yards though…

Not only has Samuel been an effective pass catcher, but he’s also been a dynamic threat out of the backfield, running for 11.4 yards per attempt and three touchdowns. The rookie has developed into a play caller’s dream in a matter of months.

When the second-round pick was on the bench getting a breather, the No. 2 overall pick was consistently a thorn in Russell Wilson’s side, pressuring him into poor throws during the first half. Per Pro Football Focus, Bosa finished with 11 total pressures (season-high), six tackles, and even dropped into coverage on one play.

Without partner-in-crime Dee Ford, Bosa has been facing double teams over the last month. While his sack numbers reflect it, the ex-Buckeye has consistently delivered pressure in the face of opposing quarterbacks, altering plays in ways that are not reflected in the box score.

Since the merger, Bosa is one of four rookies to post at least nine sacks and 25 quarterback hits, joining the likes of Aldon Smith and Von Miller — pretty good company, huh?

The only rookies in the NFL since 1978 (merger) to record:

Bosa finished the season with 80 pressures — which was sixth in the NFL — and featured a pass-rush productivity score of 9.7 — which was again sixth among edge defenders who played at least 300 snaps.

With his first two picks in the last draft, Lynch could not have hit a bigger home run.

Yet the most crucial defensive play of the entire 49ers’ season was not made by the former first-round pick; it actually came at the hands of linebacker Dre Greenlaw — the 148th selection this past April.

While San Francisco’s defensive heartbeat, Kwon Alexander, has been sidelined for the past six weeks with a torn pectoral, Robert Saleh turned to rookie Greenlaw. He asked the former Arkansas linebacker to man the middle of a 49ers’ defense that was going to face elite quarterbacks and pass-catching tight ends.

How has Greenlaw responded? In his debut against the Seahawks, he had a game-saving interception against Russell Wilson to give the 49ers a chance to win that game. In the regular-season finale, the fifth-round pick led the team in tackles (13) and made a season-saving stop at the goal line to vault San Francisco into a first-round bye.

On the season, Greenlaw’s giving up a passer rating of 83.6 and is only allowing 0.89 yards per coverage snap — both metrics are not far off of Alexander’s numbers on the season either. The rookie has stepped in place of one of the team’s best defenders and has exceeded expectations.

Beyond the three home-run selections, the 49ers also added backup tackle Justin Skule and punter Mitch Wishnowsky. Skule was valuable when tackle Joe Staley went down early in the season and protected quarterback Jimmy Garoppolo’s blind side reasonably well. While he may not project to be a starter immediately, it was valuable depth for a late-round pick.

Wishnowsky — while many fans scoffed at the selection — has been able to pin punts inside the 20-yard line on 44 percent of kicks (10th in the NFL). That’s important in tight games when flipping field position is critical.

San Francisco’s third-round pick Jalen Hurd fell to the injury bug and did not take a snap for the 49ers, while their final pick corner Tim Harris was placed on injured reserve in August as well. Tight end Kaden Smith was released because of depth at the position, but he’s been valuable to the Giants as of late.

As the 49ers are set to debut in the playoffs at Levi’s Stadium for the first time since its inception, John Lynch struck gold in this latest draft and should hope that these rookies will be a part of long playoff runs in the coming seasons.