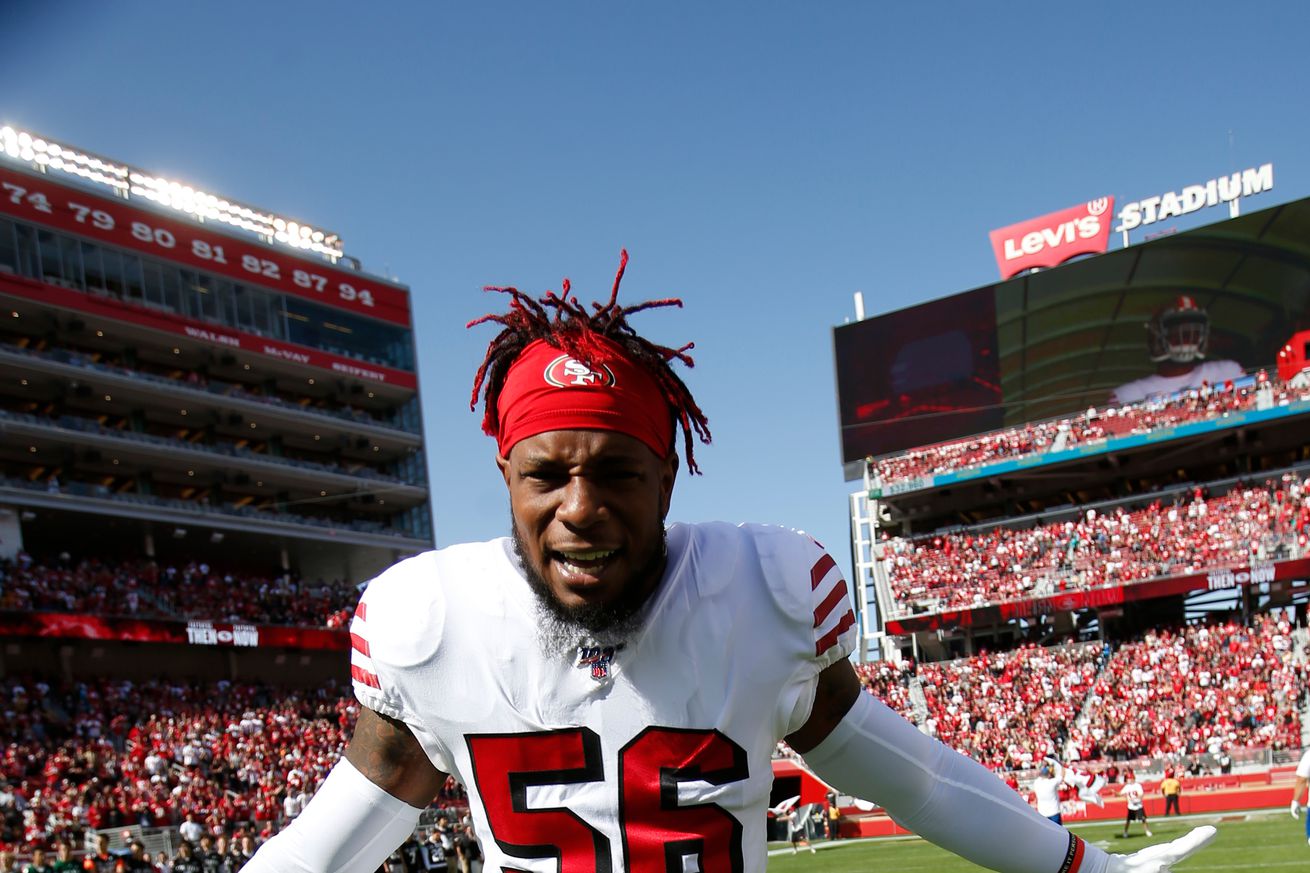 The linebackers’ impact goes well beyond the box score. Here are plays from this season to prove it.

On Sunday, ESPN’s Adam Schefter reported that San Francisco 49ers linebacker Kwon Alexander has made progress in his recovery from a pectoral tear that Alexander suffered on Halloween to the point that the 49ers believe he has a “good chance” of returning for Saturday’s NFC divisional round playoff game.

No stat will do justice to what Kwon Alexander means to this defense. He brings the best out of the players around him, and there are certain plays that the stat sheet can’t quantify Alexander makes. Nick Bosa said last week that Alexander was the emotional leader on the defense and he makes it impossible not to have fun while you’re on the field. One team source said this about Kwon:

“He’s the heart and soul of the defense. That’s no disrespect to any of the other guys, that’s just the way it is.”

The box score doesn’t pick up the energy Alexander brings to the field. The box score also doesn’t pick up plays Alexander made which helped make the defense so special when he was playing. I went through each game and picked one play that showed Alexander’s impact. Sometimes he’s making a play, others he’s not. It’s not about Alexander finishing, but it’s the process of the play. That’s what made him a star in this defense.

How many times have we seen over the past two months or so where the opposing offenses have a player wide open off play-action. To me, that’s been the biggest drop off from Alexander to Dre Greenlaw. The rookie has a tendency to to bite on fakes and take himself out of plays. By the time Greenlaw, and Azeez Al-Shaair, recover, it’s too late. Look at this recognition from Alexander below:

The quarterback is staring down the tight end that Alexander is covering. It doesn’t seem like much, but Alexander takes his read step and instantly recognizes the play is a pass. Alexander takes the route away; the quarterback has to go to another read, and the pass is incomplete. All this was made by Alexander’s awareness and coverage skills.

The plays below were all made in the second quarter by Alexander against the Bengals. My favorite clip is him hustling down the field to make a tackle around the 20-second mark. Those are the plays that others feed off and notice.

These are the plays Kwon Alexander made on Sunday….in the second quarter. pic.twitter.com/Gb2ZSfqBaZ

What you see in the clip is Alexander making plays all over, even if routine. Playing sound is what makes you a great defense. You can see Alexander’s speed and aggressiveness in the clip, not to mention his tackling skills in the open field. There will be a few occasions if Alexander does suit up Saturday, where he makes an outstanding play look routine.

The play below isn’t a highlight. It isn’t a tackle or much any stat. What you’ll see is Kwon communicating to Fred Warner, who looks as if he’s going to continue to get depth and come across the formation, before Alexander lets him know that a route is coming his way.

Taking away throws is something these two thrived on earlier this season. Being on the same page is a critical reason for their success. Warner and Alexander communicating with each other mid-play is the reason we saw teams have so little success over the middle of the field.

After play-action, the next facet that’s the most notable is the inability to get pressure from the linebacker position. Greenlaw and Al-Shaair haven’t blitzed well. They’ve gotten pressures, but those have come unblocked. Alexander brings a level of ferociousness that the two rookies do not possess. Watch the running back:

Alexander finishing the play is ideal, but the play is made once he forced the quarterback to move up in the pocket. That type of aggression as a blitzer can’t be quantified.

Knowledge against the run

The Vikings rely heavily on a zone running scheme. As you saw against New Orleans, Dalvin Cook will be patient as he looks to find a crease. If you’re not disciplined and overrun these wide zone plays, the running back will cut it up right where you left and take off for a big play. Watch Alexander slow play this run for a tackle for loss:

Once the guard and running back step right, you wouldn’t blame Alexander if he took off running toward the edge where it appears the back is headed. His experience will help against a Vikings offense that had the eight-most big plays on the ground in the NFL.

The 49ers were at their peak this season when they were fully healthy because all of their starters are good players. Dre Greenlaw is on his way to becoming that, but he’s not there yet. Alexander proved that he was there. The difference was Greenlaw came up with timely, albeit spectacular plays, while Alexander seemed to make a play every game:

Washington was driving and had the ball on San Francisco’s 29-yard line. They were moving the ball and had first down, then Kwon makes that play. The Niners are getting a playmaker back.

Another area Alexander excels in is winning in space. Not just tackling, but Alexander was excellent at avoiding blockers “in a phone booth.” With the way San Francisco lines up, they are going to give up five, six, and sometimes more yards on the ground. Most of the time, when the 49ers get a stop on the ground, it’s because someone beat their man 1-on-1. Kwon repeatedly did that this season.

More communicating, more playmaking. Alexander will have to make similar plays in space like this over the next three games.

The 49ers didn’t need any motivation for this game. It’s do or die. Alexander has been the heartbeat of this defense since training camp. I recall him in the backfield after making a tackle for loss talking crap to Jerick McKinnon. When he does that, Warner and another defender are usually right behind him. When Alexander was out, that passion didn’t stop. You see him on the sidelines before the game getting hyped with his teammates as if he was going to suit up, or during the game, he’s one of the first people to celebrate. Rewatching these games, you can see Alexander sprint into the backfield to dance with whoever made a sack. You can’t quantify that.

I’m not sure how much or where Saleh will play Kwon, but having him active gives this defense a much-needed spark plug. A spark plug this defense desperately needed.