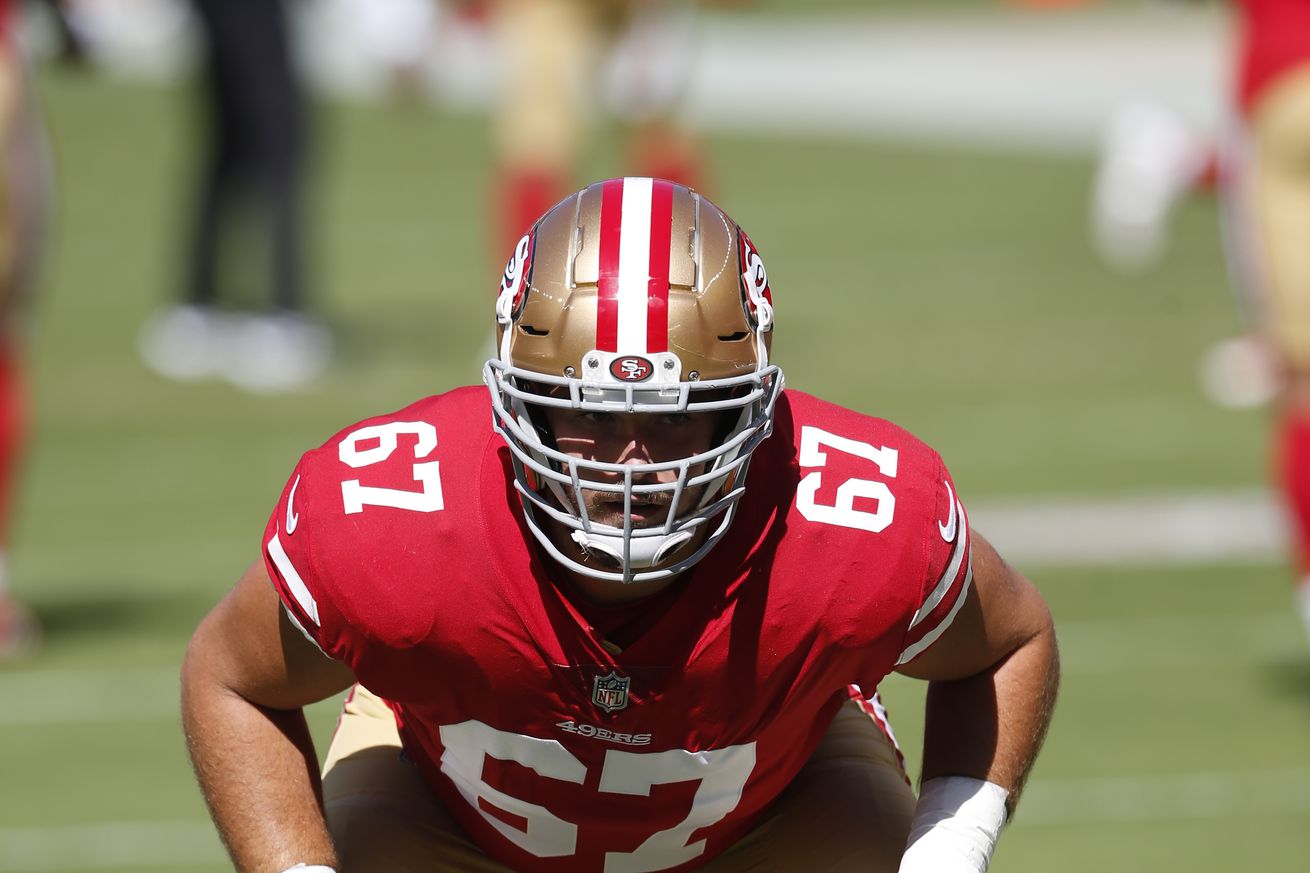 The San Francisco 49ers fell to the Green Bay Packers 34-17. The Niners were short-handed and compounded mistakes by allowing big plays on defense and turning the ball over on offense. Let’s take a look at some of the snap counts and grades from PFF.

Shanahan relied heavily on Jerick McKinnon, as he out-snapped JaMycal Hasty 42-15. River Cracraft playing more than Trent Taylor is a bit of a surprise.

McGlinchey was only credited with allowing one hurry. While he had a penalty, he was outstanding in the running game, as his 90.9 run-blocking grade would suggest. Brunskill’s first start at center was promising. He only allowed a hurry and also had an above-average run-blocking grade of 76.5.

Jas went over Richie James’s performance. James did a nice job of making the most of his opportunities. He was open often and showed what he could do after the catch. James finished the game with nine receptions on 11 targets for 184 yards and a touchdown. Five of those catches went for first downs.

McKinnon caught three passes for 16 yards. He hasn’t had the greatest blocking this season as a runner. On Thursday, Jet ran hard and created for himself. McKinnon finished with 52 yards on 12 attempts, including a late touchdown. Six of his carries went for first downs, with one rush over 10 yards. McKinnon added 25 yards after contact, which is over two yards on an average per carry, including two missed tackles.

I wonder how much of the score had to do with Reed’s playing time or if the plan was that he wouldn’t play much going into this game. Shanahan said Friday morning that he was thankful Reed made it out of the game healthy.

As for Cracraft and Taylor, is this much of a surprise?

Mullens finished with 291 yards on 8.3 yards per attempt, but he was lucky only to throw one interception. His EPA per play was -0.11, his expected completion percentage was -4.7, and his estimated QBR was 35.2. On Friday, Shanahan said that Mullens would get the “first crack” at New Orleans, but his spot isn’t cemented as a starter.

As for Skule, last night was rough. Skule allowed one sack, but it felt like seven. He also gave up two QB hits, once which resulted in an interception. He added three other hurries for a total of six pressures on the night. Skule went up against a pair of talented edge rushers and didn’t have a shot.

The 49ers trotted out 21 different players on defense. Out of 66 possible snaps, here’s how they turned out:

When asked last night why Moore doesn’t play over Harris, Shanahan said, “I don’t know. I’d say bigger body. Usually, the bigger body goes at strong safety.” Not sure the logic there, but if your goal is to get the best 11 players on the field, you’d think Moore is one of them.

Warner did not play well against Seattle. He more than made up for it against Green Bay. Six of his nine tacklers resulted in stops. Warner gave up one yard in coverage on three attempts. Watching him hunt a running back down will never get old. The play he made on the screen was so impressive. Warner is always under control, and in the correct spot, it seems.

Armstead ended up having a better game than I remember against Seattle. He didn’t have any QB hits or sacks versus the Packers, but Arik was credited with three pressures. He’s been good this season, but the 49ers have needed a great performance, which hasn’t happened yet.

Willis with his first sack as a 49er! That was good to see. Willis has played well in two games as a run defender as well.

Ward and Tartt don’t generate takeaways, but they are sound and make plays. The difference between Tartt and Harris is steep. Tartt had three stops and only allowed six yards on two targets. He also broke up a pass. Get well soon, Tartt.

Givens was playing well but didn’t generate any pressure. Jones had his worst run grade of the season, while Street hasn’t done much of anything with his snaps all year.

Harris has become a liability in coverage. He does a nice job of “running the alley” against the run, but Harris also misses too many tackles. In coverage, Harris looks lost far too often. On the deep post play that was a touchdown, Harris was still in his backpedal with the receiver two yards away from him. That’s a giant no-no. On the double move to Jason Verrett, Harris is nowhere to be found. His awareness is lacking as a deep safety, and it costs the defense.