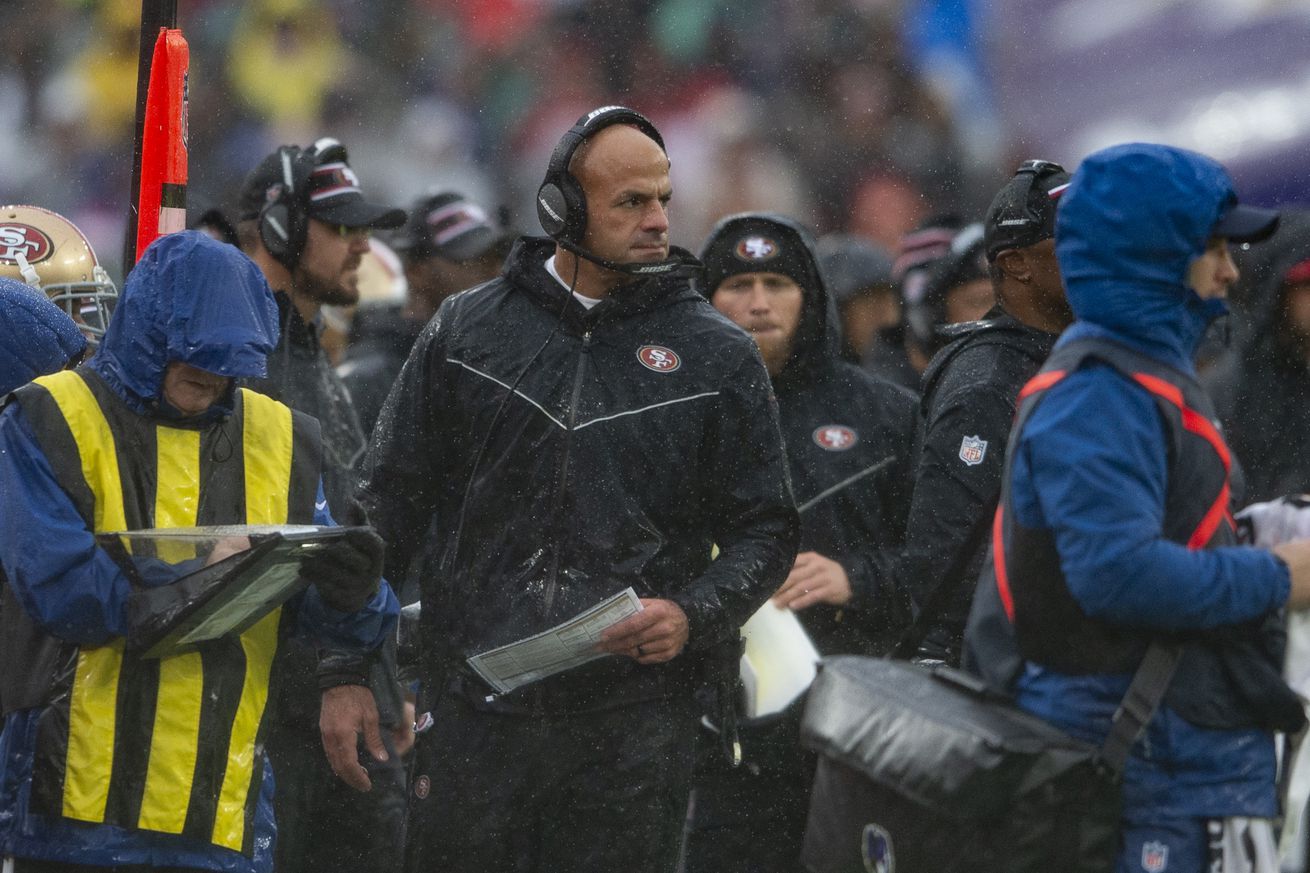 Obviously, the messaging coming out from you guys has been about the depth and how comfortable you guys are with players backing up DL Nick Bosa and potentially DL Dee Ford, but realistically do you have to find out new ways to manufacture pressure and pass rush just given that those guys aren’t as talented as the guys who they might be replacing?

“I don’t know about trying to manufacture pressure. We’ve got tremendous faith in the guys who are coming in to replace them. There’s a mindset in which we play and everyone understands what that mindset and that standard is. The message is to not necessarily be who we are, but to go out there and understand that all these men can play professional football. They’re the best in the world at what they do and so the expectation is that we go in there and we play to the best of our ability and we trust that the result will be in our favor.”

Looking at the Giants offense without New York Giants RB Saquon Barkley, what’s the challenge, I guess, that the tight ends present? They’ve got a couple of really good ones out there, obviously, but what does New York Giants TE Evan Engram present and where does that responsibility lie with your defense covering them?

“They’ve got a really good set of skill players. Engram is special. He’s dynamic. You can see that [New York Giants offensive coordinator] coach [Jason] Garrett is trying to find ways to get him involved. He’s a matchup problem, whether you’re a linebacker, safety or a corner. He’s dynamic in the way he plays. They’re not afraid to run the ball at him, because normally you get a tight end of his caliber, he’s off somewhere else doing something and you just kind of count him as a receiver, but he’s kind of putting together his entire showing that he’s not just a receiver. I’m really excited about the opportunity to go against him and see our guys compete.”

I think the last time you guys had an injury kind of crisis like this one was the Philadelphia game back in 2017. I’m wondering what you remember about how you were able to bounce back from that, in particular also, just maybe the way head coach Kyle Shanahan is handling this one versus maybe that one, when he was still kind of a new head coach?

“With Kyle and [general manager] John [Lynch], they’ve done such an amazing job building this roster. The cliché thing to say is that ‘next man up’ and just try to bounce it off that way, but we really believe it. When you look at our roster and the guys who are stepping up and the people who are out there already today, despite all the losses, these guys can play football. We’re excited about them getting their opportunity and at any time there’s an injury, it just means that there’s another opportunity for somebody else to come on in and show that he’s capable of being a star in this league too. So, Kyle’s messaging and the things that he’s been talking about all week have been fantastic. The truth of the matter is Kyle’s message has been consistent from day one. It’s a process driven league in terms of dominating your moments and dominating the day and you trust that whatever the result is, you’ll love it. As far as messaging and all that stuff, I’m not sure if I quite remember what it was in ‘17 back then, but the messaging this week has been awesome.”

What stands out about DL Ziggy Ansah on tape, in person, I guess, just one practice I realize, but how quickly do you think his skillset can acclimate and help you guys at that position?

“He’s a very large human. I was surprised when I first saw him. I was like, ‘Geez, almighty, he’s big.’ For him, it’s just, again, he hasn’t played in a little while. He hasn’t had a training camp, so expectation for him is to go out and maximize every rep that he gets. Then we’ll continue from there, but he looks good. He’s big, he’s powerful. He looks like he’s in really good shape. So, I’m excited for him to get the opportunities he’s earned and hopefully it leads to something more for him.”

Where is CB Jason Verrett at as far as his health and where he is now compared to where he was pre-injury? Is he in a position, has he shown you in two practices that if called upon, he can step in and make a contribution?

“So, JV, he’s full-go, full participation. He’s been getting good reps. He looks really good. He feels really good. He’s saying all the right things. His vibe has been awesome. I’ve got to go in and watch the tape to see how today’s practice was exactly for him and obviously talk to Kyle about what the choices are and options are with regards to him on game day, but he looks good. If he can continue stacking up days, it’ll be a matter of time before he gets his opportunity.”

Psychologically speaking, how do you get your players to play with ‘all gas and no brakes’ on this surface when two of your players have torn their ACLs on it and one of your captains, DL Arik Armstead, has tweeted his concern about the safety of this surface?

With the addition of Ziggy Ansah and possibly DL Dion Jordan as well, do you change your approach at all for the Giants?

With Dion Jordan possibly being involved and Ziggy Ansah added to your line, do you change your approach at all when you’re planning for the Giants?

“Ziggy, we’re a much different scheme than he’s been a part of, so there’s still a learning curve. In that alone, you’re going to have some limitations there. With regards to Dion and [DL] Kerry Hyder [Jr.] and Ziggy, not necessarily to say it’s the same mindset, but there’s a mindset at which we play. There’s a standard at which we play and to get those guys out there and to go prove that they’re capable of playing at a high level is an exciting thing for them. To try to reinvent the wheel, will we evolve? Maybe, maybe not, but at the same time, there’s still opportunities to be had. There’s a lot of plays with a lot of moments to be had over the next 14 weeks. I’m really excited to see our guys take advantage of it.”

Yesterday, S Jaquiski Tartt told us that New York Giants QB Daniel Jones is a better quarterback than the media give him credit for. Can you just talk about the challenges that Jones presents for your defense and how important it is for you guys to keep WR Darius Slayton and WR Golden Tate under wraps?

“Yeah. So, Jones, he’s a good player. He is. He knows how to play quarterback. You can see him go through progressions. He’s very deliberate in his approach. He’s a tough son of a gun. He sits in that pocket. He stands tall. The rush doesn’t bother him. He’ll step up. He moves in and out of traffic very, very well. He delivers the ball on time. When he gets rolling, he gets very accurate and he’s actually a lot more mobile than people give him credit for. As far as the two receivers are concerned, obviously really, really good football players. Got a chance to be on the same team with Golden Tate, as a football coach, obviously, in Seattle. Can’t speak highly enough of him, especially when the ball’s in his hands. The guy’s one of the more dynamic runners this league has ever had at the receiver position once the ball’s in his hand. So, it’s always a challenge. Like I’ve said, these guys, they’re on a professional football team and in between the white paint, they play to play for a reason. They’re the best in the world at what they do and every week, regardless of perception outside any building, these guys are the best of the best and it’s always going to present a challenge.”

With the loss of Nick and DL Solomon Thomas this week, can you talk a little bit how guys like Arik Armstead and LB Fred Warner have maybe stepped up even more as leaders and how they’ve kind of gotten the defense and brought them together?

“So, with regards to Arik, I can separate it all for you. You look at the D-Line room and Arik and the leadership role that he’s taken over and the way he practices every day, the deliberate approach he takes to taking care of his body, preparing, watching tape, all of it is phenomenal. Then you go to the linebacker room with Fred Warner and [LB] Kwon Alexander and their preparation, their body maintenance, the weight room, out at practice, the energy that they bring. Then you get to the DB room and those guys with [CB Richard] Sherman and [CB] K’Waun Williams and [DB] Jimmie Ward and Tartt, even [CB Emmanuel] Moseley, the deliberateness at which they approach the game on a daily basis. This team is so internally driven on defense in terms of they all want to be their best. There’s a lot of selflessness that goes on, on the defensive side of the ball with those guys. While each individual room has a person that we look to for leadership to bring the unit together, each guy is just so internally driven and so motivated to be their personal best that they’re not worried about so many things that they don’t have control over. They’re worried about being their best and it really comes to the selflessness that they don’t want to let their teammates down. I can’t speak highly enough of the group that we have. I’m really, really excited to see them compete.”