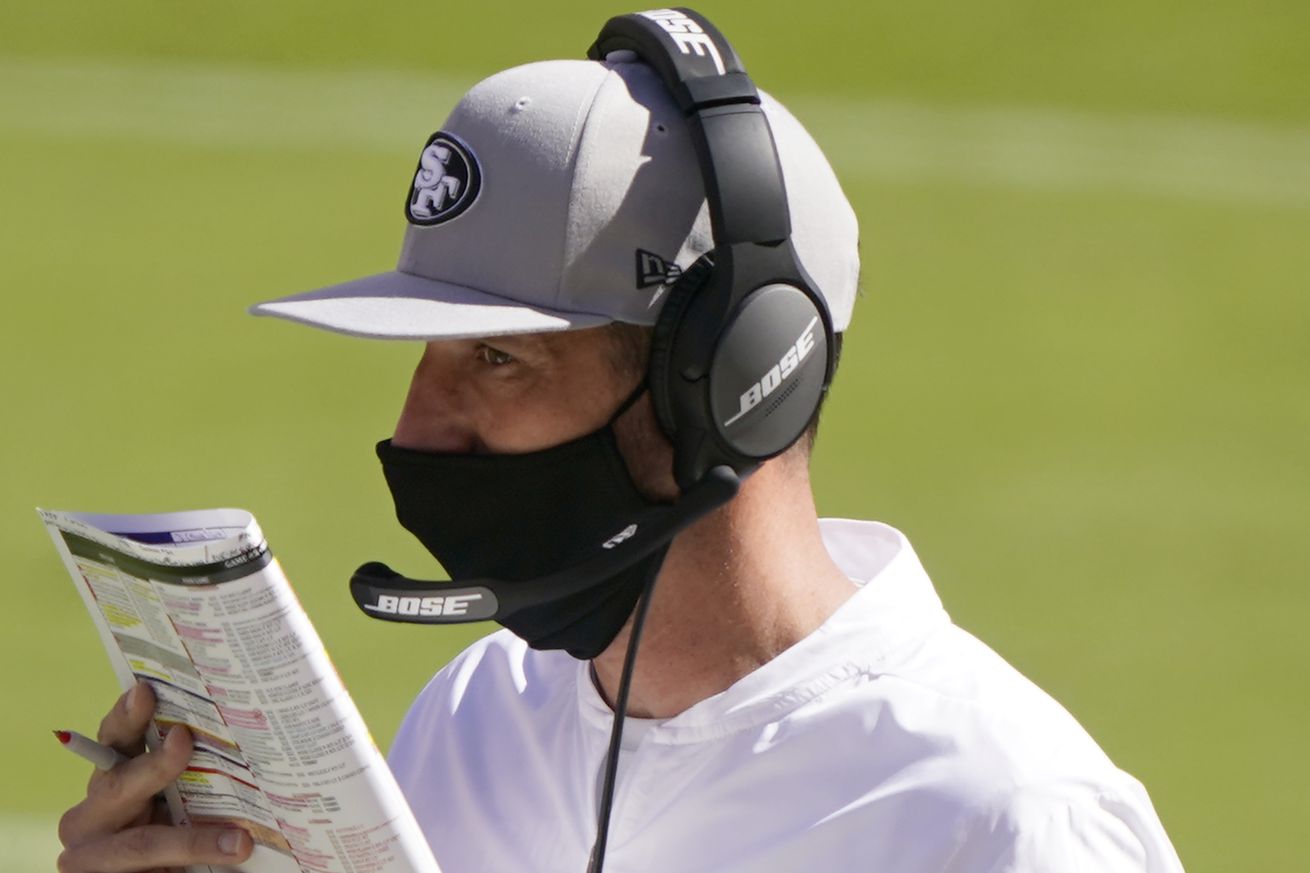 The 49ers HC spoke to the media after Friday’s practice

What happened with Jimmie Ward?

“He strained his quad in practice yesterday. So, we got the MRI back late last night and he’s not going to be able to go this week.”

What are you looking at then for your starting safety? Are you going to let DB Tarvarius Moore and S Marcell Harris be the starters?

“We’ll continue discussing it. I’ve got a pretty good idea, but we’re going to surprise you on Sunday.”

As far as Trent Williams, I heard you say earlier you’re fairly optimistic. I assume nothing’s changed in that regard?

“Yeah, he made it through practice today, even though it was pretty much half speed, but when you have an ankle like he does and when we’re flying like this, I still want to see how he is tomorrow, but hoping he’s going. That’s why we didn’t put him as doubtful.”

The defense has had a lot of challenges going against mobile quarterbacks. Was there anything that you focused on in particular this week heading towards New England Patriots QB Cam Newton on Sunday?

“The same stuff you’d normally try to do. Going against mobile quarterbacks is always a challenge. There’s a different element, changes up your run fits and one more player you have to count for on every single play. So, it’s always a challenge, but there’s a lot of other things that you’ve got to defend besides just the running plays by the quarterback. So, you make a big emphasis of it. It’s been good training for us having a number of them this year and hopefully that’ll lead to us continuing to get better at it.”

Do you have any idea on the severity of Ward’s injuries? Could this be a multiple week thing?

“It could. They gave it, I think, a 1.5 grade, so I don’t think it would be real long, but we know for sure he’s not going to make the trip with us and we hope that’ll help him get a chance to be ready for next week.”

There was a report yesterday that the 49ers have made WR Dante Pettis available for trade. Can you confirm this and if so, why do you feel this is the best course of action at this time?

“It was two weeks before the trade deadline. I know [general manager] John’s [Lynch] taken a number of calls on it. I know he’s made some. It’s stuff that we do right now and we’ll see if it can help us and if it does, we won’t hesitate to do it, but nothing’s imminent. Dante is a part of our team and there’s a good chance that he could still stay a part of our team. If he does, when his number’s needed and he gets his opportunity, I plan on him being ready.”

I heard you talk about RB JaMycal Hasty, his first, I don’t know NFL play, maybe against the Giants and he got that pass. Obviously, he was thrown into the fire. Friday, how much trepidation did you have? Obviously with a guy like that, just a rookie, like don’t fumble. Did you give him any messages or was it just like, all right, he’s got this?

“No. I rarely do with guys like that. You don’t want to go up and tell guys not to fumble it. To me, if someone told me that, it would make me pretty insecure that the head coach is expecting that you’re going to fumble. Probably wouldn’t put him in if I had to tell him that. I’ve got a lot of confidence in him, how he carries himself every day. You can tell he’s got confidence in himself and so I don’t think he would need that. That’s why we don’t hesitate to put him in.”

You guys talk a lot about QB Jimmy Garoppolo being the same guy every day, but this week, have you noticed any extra oomph for lack of a better word? Any extra focus, excitement about going against the Patriots?

“I wouldn’t say it’s drastic, but I’m around him all the time and know him pretty well. So, I can tell he’s excited. It’s been some time since he’s been back there and he’s got a ton of respect for everyone there, and I know he’s got a lot of good friends there. So, anyone in that situation is always, there’s always a little more excitement for the person than usual.”

How did Jeff Wilson look? I know he’s limited, has been limited in practice, going forward towards Sunday. Then also an update on RB Tevin Coleman?

“Yeah. Jeff just, he didn’t, he got more as the week went. Today he got a little bit more than he had the last two days, but again, it was walkthrough. So, it was nice to have him out there for about 10 plays yesterday. I’m hoping this flight will treat him right and he’ll give us the green light on Sunday. Tevin, outside chance the next week. I’m hoping that he can come back, but it’s definitely not a guarantee. We’ll probably find out a little bit more later in the week next week. If not that, hopefully the week after.”

With Jimmy having practiced against New England Patriots head coach Bill Belichick’s defenses as a member of his team, is that something you even ask him about or do you just sort of watch the film and let that speak for itself?

“No, you just watch the film and let it speak for itself. If Jimmy had something that was on his mind he wanted to tell us, I know he would, but no, that’s not something I dive into too much.”

We heard that DL Dee Ford was back on the field today doing some individual work. Did you get a chance to see him? Is there any progress there with his status?

“On a Friday, I, unfortunately during the individual, it’s much smaller time. You only get like three to five minutes and I was doing red zone group install with the defense. So, I missed it, but I’ll find out from [defensive line coach Kris] Kocurek later.”

Who gets bumped up with Mostert going on IR? Who takes over his roster spot?

“We haven’t decided yet, especially finding out this stuff with Jimmie Ward, but that’s stuff we get to discuss all the way until one tomorrow. Got a long plane ride here to discuss that, but some things we’ve had to shuffle around here a little bit with that injury happening to Jimmie yesterday and just confirming that he’s going to be out. So, you’ll probably have a good idea by one on Saturday.”