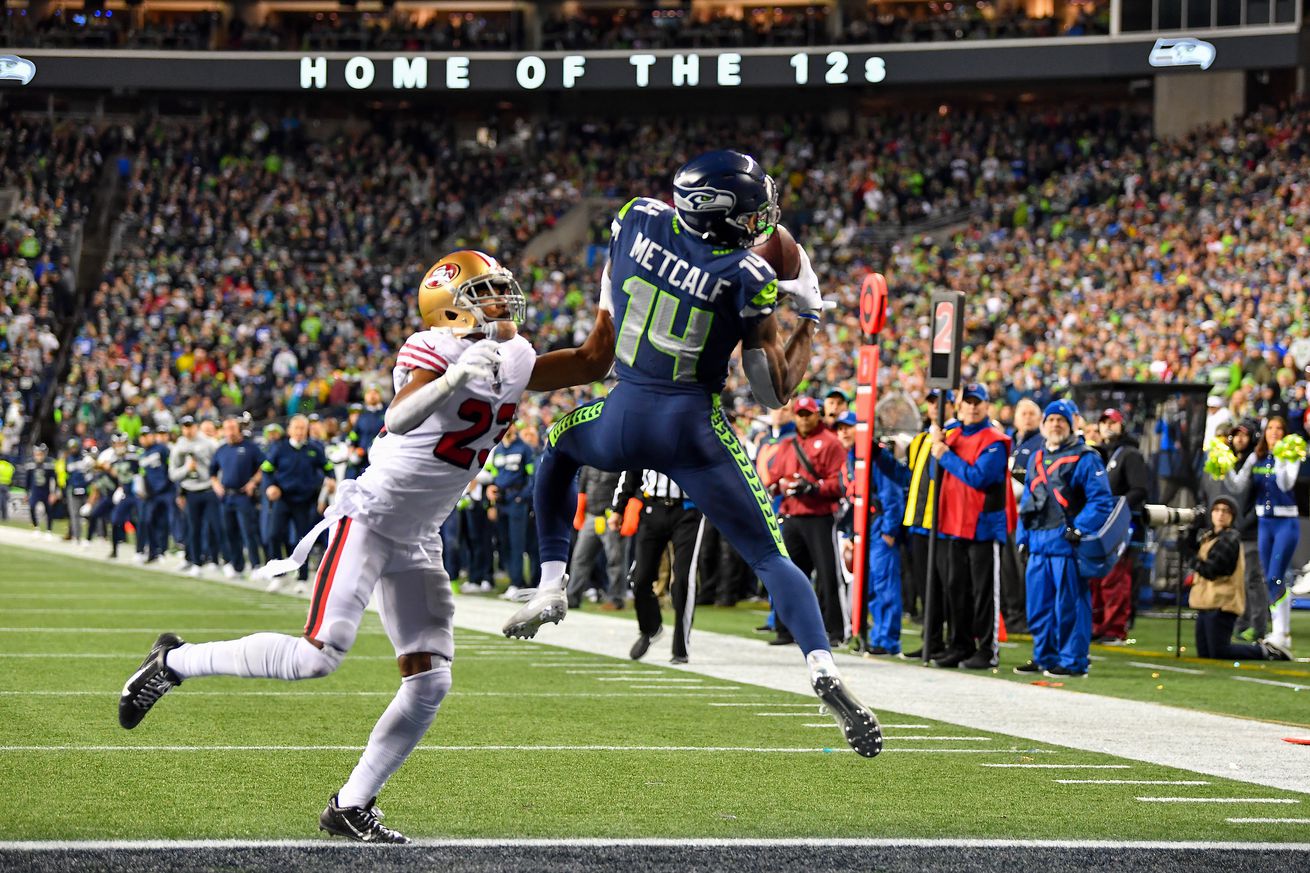 Shanahan spoke to the media on Monday afternoon

San Francisco 49ers head coach Kyle Shanahan was on a conference call to discuss injuries, who starters at cornerback, the play of Jimmy Garoppolo, and much more.

How did you guys come out of the game from an injury standpoint?

“We came out good. I have no reports of anything new today, so we’re good to go.”

DL Nick Bosa had a wrap on his hand after the game. Was there any little minor injury?

“Yeah, there was something minor on his hand, but I didn’t get any report on it today. I’m not sure exactly what it was, but it was minor. At least enough where they didn’t have to call me and tell me.”

What direction did you decide to go in terms of the next week or week and a half or so schedule-wise?

“Yeah, everyone’s got the day off. Tomorrow, we’re going to come in, do some work tomorrow. Then we’ll have New Year’s Day off and then we’ll get a couple practices in I think that Thursday and Friday and probably take the weekend off and then get started up on Monday.”

What’s your level of optimism that you’ll have a healthy S Jaquiski Tartt and a healthy DL Dee Ford for the Divisional Round?

“I’m hoping for it and I am feeling optimistic about it. You never know with how those things go with the ribs and with the hamstring, but that was the goal. We knew there could be a slight chance this week if we were playing this week, so getting this Bye week should make it an even better chance then.”

The last five games have all basically been decided on the last play of the game. Each outcome there’s just been seconds left on the clock. I’m just wondering what you think that might do in terms of preparing you for the dramatics that lay ahead in the postseason?

“The more you can be in those games, it’s not always the most fun thing to go through every single week, but the more you can be in those the stronger it makes your team. Those are intense situations and I felt like we got that. Just looking back at our first Seattle game, we came up short in that situation and it seems like ever since then, except maybe the Green Bay game, I feel like we’ve been in a game that always comes down to the last play. I think our team’s gotten used to it. I think we’re comfortable in it now. Still would always like to make it a little bit easier, but I think our team’s comfortable and doesn’t mind those situations at all.”

When you watch the film of that game last night and I imagine you’re able to kind of take a step back from the emotional standpoint of it and watch it in a more clinical setting, what struck you about what you witnessed?

“I was just proud of how hard our guys played. They’ve continued to do it all year. I still feel like just watching the tape, you can see that they even found a way to take it to another level. The guys were, every play seemed like the final play. The guys put everything on the line. I know how important it was for us to win the division and how bad we wanted that Bye week. Guys put a lot on the line to get through it. A lot of guys are playing through things and staying out there and fighting and it was fun to watch.”

The fact that QB Jimmy Garoppolo has arguably had his two best performances in the most hostile environments in New Orleans and Seattle, what does that tell you about him?

“Just how well he’s been able to focus in these situations. It’s unbelievably loud and hard for the players to hear him and hard for him to hear me when I’m even talking into his helmet. How good he’s been with the cadence and getting the plays in and out. I don’t think we had any delay of games in those situations. Being able to communicate to the guys and get them out of the huddle even when he’s got to call the play a couple times just for people to hear. He’s been extremely impressive and it’s been great. The good thing is I’m glad we’re going to be in our home stadium the next two games so we don’t have to worry about it. But, he’s been great on the road.”

After looking at the tape with CB Ahkello Witherspoon and the choice to go with CB Emmanuel Moseley, what are your thoughts now?

“I feel good about the decision that I made during the game. Ahkello wasn’t bad by any means, but Moseley had played at a high level when Ahkello was out. I thought Moseley could come in and give us a spark, take a little bit of that pressure off Ahkello. E-Man was up for the challenge and he came in and did a real good job.”

What can you say about the way that WR Deebo Samuel has evolved, especially over the last few weeks?

“He’s been impressive all year. From the first game in Tampa Bay, him having to play a lot as a rookie right away and him fighting through stuff throughout the year. Just the ups and downs with that rookie wall and everything that you always expect guys to hit. These guys are usually done playing over a month ago and get a month off, really, to get ready for their Bowl game. He’s been week in and week out for us, he’s played through a lot of injuries and he’s played like a veteran in that way. He’s one of the reasons we’re where we’re at.”

Considering how well you guys have moved the ball, you guys had the fourth-and-one with about just over two minutes to go. Was there any decision to go for it right there?

“There was. It’s always hard for me not to to tell you the truth. I thought it was closer to two yards than one yard, which definitely affects the decision. I thought our defense was playing really well and I thought it was important that we got the guaranteed points at the time.”

As far as who will start at cornerback in the Divisional Round game, as far as Moseley or Witherspoon, is that to be determined?

“Yeah. I haven’t had a chance to really think about that. It’s two weeks away from now, so we’ll see how practice goes. Regardless of what happens, I know we’ve got two guys who can both help us win.”

What is the status of OL Mike Person and how close is he to getting back in the lineup?

“Mike is good to go. He’s battled through all his stuff. I think these two weeks of him not having to get in these games have helped him a lot. The issues he has aren’t going to go away until after the season when he can take a couple months off. I think these two weeks have helped him. Getting another Bye week will help him a ton and we’ll see how practice goes this week and next.”

You went through sort of a similar process. With defensive coordinator Robert Saleh, there’s a report that he was requested by the Cleveland Browns for an interview for the head coaching position. You had a request at the same time when the Falcons were in the playoffs a couple years ago. Just, what’s that process like for a coordinator during the playoffs?

“It’s different. It’s kind of two different worlds. You’ve got to dedicate some time to that and the rest of your time is doing whatever you can to win the playoff games. It’s actually a perfect situation for Saleh like it was for me because I was fortunate to have the Bye week, also. When you have a Bye week, we’re going to get a couple days off at the end of this week. That’s the only thing that stinks for Saleh because he won’t’ get those days off because he’ll be preparing for an interview one day and then probably doing the interview the next day. But, it’s perfect when you’ve got the Bye week because we’ve got the time to do it. Usually those two days happen and then it’s over. I don’t even think they’re allowed to talk to the guy after that. We’re working every single day getting ready for the playoff game.”

Are the Browns the only team that has requested to talk to him?

And will he travel for that interview or will they come to him?

I ask this seriously, as far as your history, your season with the Browns and what you experienced, have you had that conversation with Robert about what went on it your season in Cleveland?

“No, I haven’t yet. I don’t think that has anything to do with the people who are there now. I’m pumped for Saleh to get this opportunity and Mr. and Mrs. Haslam are great people and I think they’re great people to work for. We’ll see how the interview goes for him.”

After looking at film, how did DL Kevin Givens and DL Anthony Zettel do, I mean, kind of being thrown in pretty quickly?

“They did a good job. They got in, they did their role that was needed and the assignments that we asked of them. Got a chance to get in and make actually a couple plays, too. We were happy with what they did. Kevin just finding out that he was going to get that opportunity with a couple days before the game and Zettel being here in the first week, but they went in and definitely helped us win that game.”

LB Kwon Alexander was warming up a little bit before the game. Any status at all, update on him and how he’s doing with his pectoral injury?

“He’s coming along. There’s definitely going to be a chance. I don’t think that will be this week, but if we’re fortunate enough to win our first game, I think he could have a chance after that. We’re still holding out hope for that, but we’ll see how it goes over these next couple weeks.”

What is the focus here during this week and heading into the next week before you know who your opponent is? What do you want the guys to do and to accomplish during this time?

“It’s a fine line. We haven’t had a Bye week, our Bye week was, I think, three months ago, so it’s been awhile. We’ve got guys like [WR] Emmanuel [Sanders] who didn’t even get a Bye week because they hadn’t had theirs yet in Denver and when he came here, we already had ours. He’s going on 17-straight games with no Bye week. He had five preseason games. I really want the guys to rest and get away a little bit, but it’s not like your typical Bye week where I don’t picture anyone leaving anywhere or anything like that. We’re going to be in and out of the office. We’ve got to keep the bodies kind of in the routine that we’re used to right now. But, at the same time, we need some well-needed rest. We’ve got to get our energy and be as strong as we can for next week, I mean, two weeks from now, which is great. But, we’ve also got to keep making sure that we keep our rhythm going and we get locked into football and never not thinking about it.”